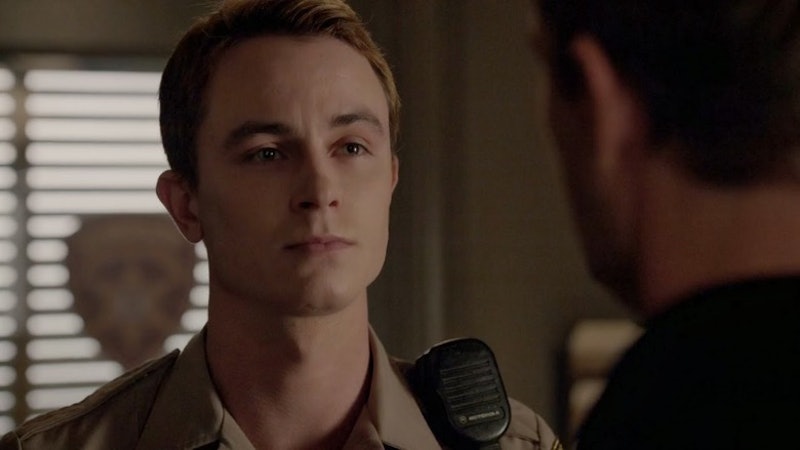 There are a whole slew of things about Teen Wolf that just plain don't make sense, and in order to enjoy the show, you have to suspend judgment to a certain degree. However, the show does have a knack for eventually answering its biggest questions, if not always in the way we expect. Why is Lydia in Eichen House? Who is Theo Raeken, really? Will Isaac ever come back from London/France/filming other shows/wherever he is? But perhaps my biggest question, one that has plagued me since Season 4, is this: What is Deputy Jordan Parrish on Teen Wolf ?

Popular theory states that he's a phoenix, and it's definitely a plausible idea. The first supernatural interaction we had with Parrish was after his name showed up on last season's anti-climactic dead pool and an assassin tried to murder him by burning him to death in his own patrol car. He emerged from the fire and ashes, much like a phoenix does whenever it is reborn.

And while Teen Wolf fans are smart, and there's a pretty big chance that all those who believe Parrish to be a phoenix (myself included) are right, it's entirely possible that Parrish is something we've never encountered before. I mean, how many people knew about kanimas before Jackson was revealed to be one in Season 2? For the sake of science and Teen Wolf and all things in between, I did some research into other supernatural creatures and found a few more that Parrish could identify with.

As a huge Harry Potter fan, nothing would make me happier than finding out that Beacon Hills' hottest cop is a dragon. Dragons are, of course, fire-breathers, which would explain Parrish's ability to withstand burns and touch fire without facing any real harm. However, in most cases, dragons are depicted as villains to be overcome by some kind of heroic deity, and I'd be pretty disappointed if Parrish turned out to be evil after all this time.

No, this is not the same thing that Kira is. Kira, technically, is a thunder kitsune, and her powers are connected to electricity. Like Parrish, she didn't really know what she was until her mother told her, and, like Parrish, her eyes glow yellow and she has the ability to heal herself. The only difference is that Parrish's powers are connected to fire. Keep in mind that, even though we've seen Kira absorb electricity, we've never actually seen Parrish absorb fire or anything like that — we've just seen him magically heal after a period of time.

This would actually be kind of fascinating, because reapers aren't exactly good or evil. They primarily serve to shepherd souls to the afterlife, and there are many folk stories out there that suggest that reapers are the only supernatural creatures that can never die. Anyone who's watched Supernatural probably has a complicated relationship with reapers and might not want this to be true, but it might be an interesting way to deal with Lydia's terrifying vision of Stiles' dead in his car.

There are those that think that Parrish is an Obsidian Man, as suggested by a commenter on an MTV article, which would be admittedly difficult for the show to develop, but this is Teen Wolf we're talking about, so maybe not. These creatures are formed from lava, so they are immune to fire, have healing abilities, and show increased strength and stamina. Certainly sounds like Parrish to me.

This is a pretty flimsy theory, but it has to do with Parrish's charm and ability to persuade people to do what he wants. He was able to convince Meredith the give Lydia the key to understanding the deadpool, and he works on the Beacon Hills bomb squad and can convince people to keep calm. However, Sirens are generally women and don't have any kind of connection to fire, so this may not be a totally concrete idea, but it kinda works, right?

I wouldn't be surprised if all of my theories ended up being wrong, though. Teen Wolf loves to surprise us.