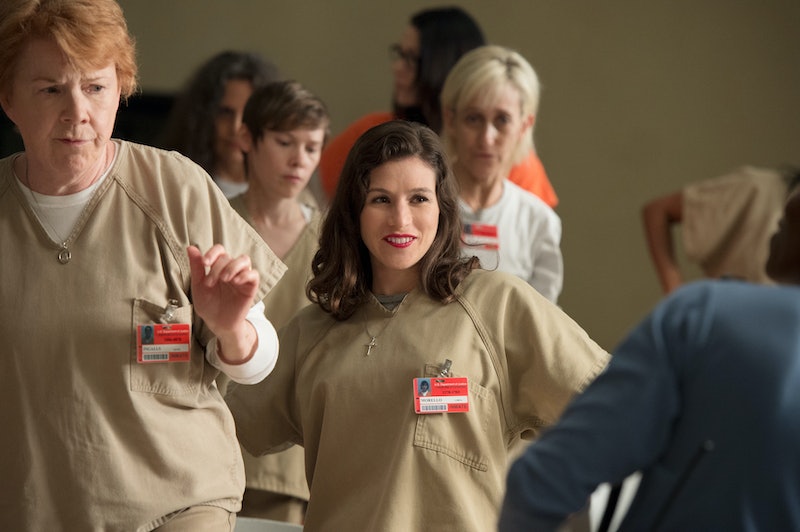 One of Orange Is the New Black's greatest strengths is making you love otherwise damaged characters, but I can't deny that finding out that OITNB's Lorna Morello was a stalker rather than just an eccentric Bridezilla really threw me. But, since she's graduated from planning a wedding to actually marrying her Season 3 beau, now I'm just curious when Morello will be released from prison, and if she'll be able to make her marriage work while she's behind bars. In the OITNB pilot, one of the first exchanges we hear in Litchfield is Piper and Morello talking about the time they have to do. Morello says "I got 34 [months], but I'm hoping with good behavior it'll be less." That's just shy of three years at the beginning of the series, and a little less than a year has passed in show time, so Morello is still looking at about two years in jail — I don't know if I'd get married during those circumstances.

It's actually something the two of them considered, but they eventually decided they'd rather get married and worry about the wait later. And, unfortunately for both of them, it's still a pretty length wait. In the beginning of Season 2, Morello, while driving Miss Rosa to cancer treatments, discussed when she's going to be released, and she says "more than two years." Since the show is still in 2013, that means she would be released right about now in real life. But, the show moves much slower than that.

Also, there's a possibility that she could now be facing even more time than that. After giving Rosa the opportunity to escape, she lost her van duty privileges, and while everyone seems to think she "accidentally" let Rosa take over, that could have possibly added time to her sentence.

There's actually a current high-profile prison escape case in New York State (where OITNB is set), and several prison workers are being charged with the assisting of a prisoner's escape. CNN cites that these charges will result in some serious prison time — up to seven years for one charge (giving contraband) alone. Of course, the punishment may be more severe because they're prison guards, but I doubt Morello would get off scott-free if they seriously thought she'd intentionally let Rosa have the van.

Similarly, Morello is lucky no one ever found out about her Christopher jaunt — an attempted escape would absolutely send her to max with a longer sentence. Especially because she stole prison property and used her escape to break into Christopher's house, the target of her stalking.

And, even though it's not directly her fault, Vince going to beat up Christopher on the outside is also something that could potentially get Morello in trouble. We still don't officially know if she's doing time for the stalking or for her eBay fraud, but, either way, if Morello got caught sending her husband to the home of a man who has a restraining order against her, it wouldn't look good for her "good behavior" hopes.

Morello may have initially seemed like a harmless prisoner who just so happens to be spending a little time behind bars while she plans her wedding full time, she secretly turned out to be one of the most dangerous inmates in Litchfield, with an escape that went completely unnoticed, an obsession with a man she went out on a single date with, and a brand-new husband who's willing to be her guard dog on the outside. That's a scary combination, and one that might explode before her scheduled release date. But, it should make for a really interesting Season 4.