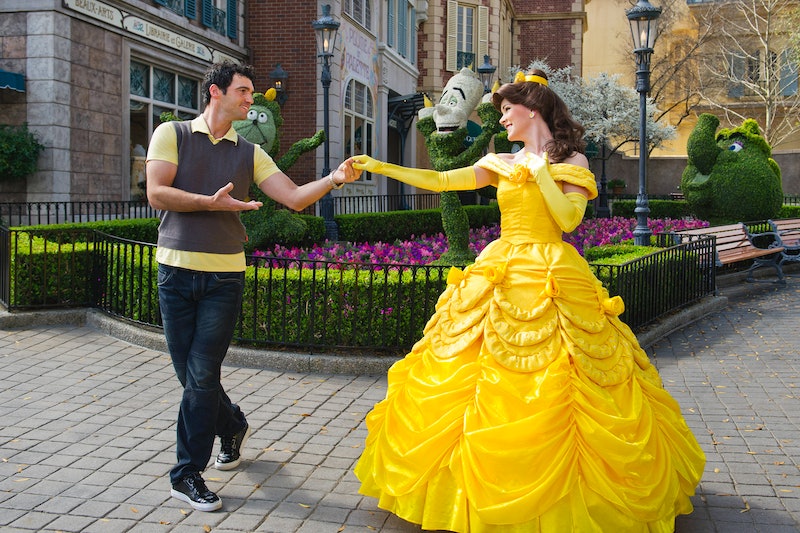 It looks like princesses have replaced vampires as Hollywood's new go-to subject. First, there were the back-to-back releases of the Snow White-inspired Mirror Mirror and Snow White and the Huntsman in 2012. Then came Disney's announcement that Downton Abbey's Lily James will star as Cinderella in a March 2015 live adaptation of the fairy tale. And now, there are reports that Anna Kendrick is in talks to play Cinderella in an upcoming adaptation of Into the Woods, while Emma Watson has long been rumored to be playing Belle in a Guillermo del Toro re-imagining of Beauty and the Beast. Phew, that's a lot of princesses.

So far, the casting in these films is inspired. The regal James should fit into Cinderella's role like a glass slipper, especially if Disney's live-action version stays close to the animated classic, and Watson would be an absolutely perfect Belle if those rumors are true. (But when isn't Watson a perfect anything?) But, of course, as children of Disney, we have our own ideas of who should play each role, if a fairy godmother were to magically grant us the ability. So read on to see which actresses we think would make perfect, modern princesses.

Dianna Agron: The Glee star has proved that she can sing, and as long as she can bring out a sweeter side we don't see in Quinn, the blonde should fit right into Cinderella's gown.

Alison Brie: Somehow, after playing naive perfectionist Annie on Community and finally standing up to Pete Campbell on Mad Men, Brie still hasn't become the movie star she deserves to be. So why not give her a shot at Snow White? I mean, look at her — lips as red as blood, and hair as black as that wood of the window frame. Can't you just see her surrounded by woodland creatures?

Emilia Clarke: Having made a name for herself playing the fierce, dragon-wielding Daenerys on Game of Thrones, Clarke can soften up her image by spending time with a different kind of beast. Don't believe us? Ask the dishes.

Brenda Song: Hey, The Suite Life of Zack and Cody star is already a Disney girl. But Song has proven there's more to her than London Tipton with appearances on New Girl and Scandal, as well as role in The Social Network. All her sweet life needs now is a sword to help her transform into badass heroine Mulan.

Ashley Benson: Aurora is arguably Disney's least popular princess (mostly because she spent most of her on-screen career unconscious), but Benson comes with a Pretty Little Liars fanbase ready to buy their tickets. Still, the actress has alienated some young fans with a racy role in Spring Breakers. But if she's willing to win them back, Benson could make for a great Sleeping Beauty.

Freida Pinto: Most audiences only know Pinto from 2008's Slumdog Millionaire, and she deserves more recognition. And it only takes one viewing of Immortals to prove the actress can shine amongst the guys — and, presumably, Aladdin too. Genie, don't make us track you down in order to make this a reality!

Chloë Grace Moretz: Mandy Moore gave Rapunzel a lovely voice in Tangled, but if someone is going to play a live-action version of the princess, it should be Moretz. Not only does she exhibit the perfect youthful energy, but she's proven she can be both funny (30 Rock) and fierce (Kick-Ass). Of course, unless she's given 10 years notice, she's going to need some hair extensions.

Jane Levy: The Suburgatory star has ventured onto the big screen recently with roles in Evil Dead and Fun Size, but has yet to become a star. If she's willing to leave the suburbs for the beach, she'd bring some more smarts to the clueless Little Mermaid. As long as she can sing, of course.

Naya Rivera: The Glee actress is already the spitting image of the Disney heroine, and bleeds strength necessary to play Pocahontas besides. And an added bonus: Rivera is 1/4 Native American, which could help her bring authenticity to the role in a tragically whitewashed Hollywood.

Meagan Good: Since her NBC show Deception was canceled (R.I.P.), Good should be free to play Princess Tiana. She's already proven she has both chops and star power with roles in Think Like A Man, Stomp the Yard, and the upcoming Anchorman: The Legend of Ricky Bobby — if she could act opposite Ron Burgundy, certainly she could handle herself opposite a frog.

Jacqueline Emerson: A bit of a longshot, sure — the Hunger Games is still an undiscovered, but promising, actress. Still, is there anyone who looks more like Brave's Merida? All she needs is a little humidity.