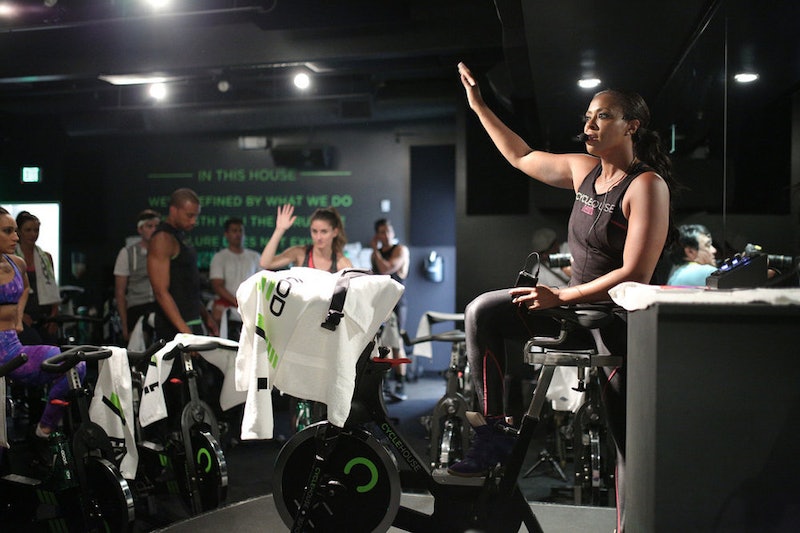 I love a trendy workout. Whether it's barre because Chrissy Teigen, or boxing because Gigi Hadid, I'm in. So you better believe that the Hollywood glam meets sweat-city style of E!'s newest reality show Hollywood Cycle is right up my fitness alley. The show follows Cycle house, a cycling studio in West Hollywood, which is to thank for many Hollywood bodies. But how can you take class at Cycle House of Hollywood Cycle ? Well, as long as your ready to die by means of stationary bike, then the answer is pretty simple.

The show's promo boasts that the instructors of Cycle House are celebrities to the celebrities, with clients like Madonna to Maria Menounos. Doesn't sweating buckets next to Madge herself sound like the perfect way to spend an hour of your day? If you answered that question with a resounding "YES! I want to sweat and sing "Material Girl" next to The Queen Of Pop!" then I have good news. It's not hard to take classes at Cycle House. But it will probably be very hard to actually take a class at Cycle House, so be warned.

Cycling, spin class, Hell, whatever you want to call it when brunching your worries away on the weekend, is a killer workout. So not only will you be working out with the stars of Hollywood Cycle, but you'll also be working up a serious sweat.

So how can you take classes at Cycle House?

First things first, before brushing off your Lululemon Wunder Under crops, you've got to throw down a few dollars on a class pass. There are multiple packages riders can buy. You can buy classes in packages of one, five, and 10, which will cost $29, $135, and $260 respectively. If you're really committed, you can buy packages for monthly membership.

Now that you've paid for a class (or 10), you can book a class on the scheduler on the Cycle House site. There are a lot of classes still open with spots (even with Nichelle, Aaron, and Nick from the show) available pre-premiere of the show, but don't expect that to last long once the show starts airing and everyone in Hollywood wants a body by Nichelle.

Bike Your Heart Out

Just remember, you might run the risk of being recorded for the show if you take a class with one of the featured instructors on Hollywood Cycle. That's really cool — I get it — but I know for a fact that high definition cameras are the last thing I'd want to be in my presence while a bike seat becomes one with my butt. So maybe pick a spot in the back. And good luck.

More like this
The Richest 'Bling Empire' Cast Member Is...
By Hugh McIntyre
Ryan Seacrest's Net Worth: 'American Idol' Makes Up Only Half Of His Wealth
By Hugh McIntyre
There's Plenty Of Drama Brewing To Warrant A 'Summer House' Season 7
By Brad Witter
Danny Dyer & Ellie Taylor’s New Netflix Game Show Is All About Cheating
By Rachel Mantock
Get Even More From Bustle — Sign Up For The Newsletter