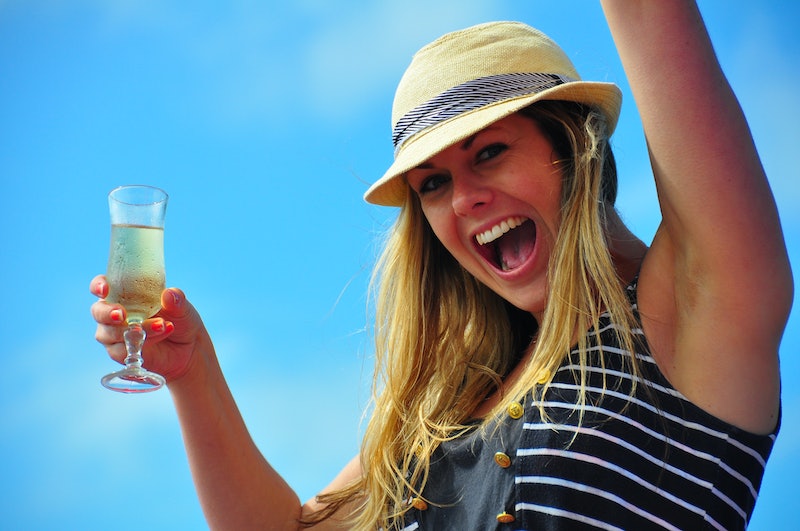 We're well into summer, folks. I'll bet you noticed the classic signs of the season such as an abundance of grilled fruit and the feeling that alcohol consumed before noon is socially acceptable—which is cool because there are some things you can only get away with when you're drunk. Summertime's warm (blistering, even) embrace of daytime drinking gives you even more opportunities to be mobile with that unique kind of courage booze grants us.

Sure, "I was drunk" doesn't seem like the most inventive excuse. It seems to carry less weight and look a whole lot less cute, too, as we inch towards or past 30. But I call bullshit. If Afroman can make the excuse "because I got high" valid, there's no reason drunkenness can't do the same for you. (At least in some arenas.)

In an effort to make the most of your summer—including more daylight hours, more socially warranted drinking hours, etc.—I developed a guide to things you can totally get away with solely because you were drunk. I tried to hit a lot of arenas like home decor, honing new DIY skills, expanding your social and romantic circles, and so on. There's a bit of adventure in each activity, so cheers to that.

Not getting back to someone

When done soberly, that's plain rude. Drunk? Well, it does get a bit tougher to text when you can communicate only in Emoji or squinting one eye.

You're trying to save money!!

...and leaving the kitchen a mess

No filter can fix that.

When they're not even funny, hopefully they're at least drunk.

Filling your Amazon cart with "essentials" that are hardly such

Examples: Personalized chocolate bars, glittery cat toys, glow-in-the-star stickers for your bedroom ceiling. Come morning, you don't NEED these items, of course, but you certainly won't hate them. Sometimes Drunk You hooks it up.

Texts that are in no discernible language

Getting bold with hook up locales

Because under no other circumstances would it be cool to do your boyfriend in the bathroom during a Fourth of July party. Especially when said party is in a small apartment on a rainy day and there's only one bathroom.

Double-tapping a photo from 52 weeks ago

Confessing to social media stalking to a crush

I'm certain my friend's boyfriend didn't need to know all the details of a recent breakup, and in any sober circumstance he wouldn't.

Befriending people in a public restroom

You're shouting so no can actually hear you peeing, right?

If you're insane like me, you might even drunkenly make a Google Calendar event of it. Which unfortunately does not usually make it real. (Except in cases where you promise to attend a pure barre class with a new friend. Then it's set in stone.)

Saying "I love you" and definitely not meaning it

Booze has a way of casting people in flattering, forgiving light.

Such as cab drivers, that friend you made in the bathroom, a convincing work of street art—their form doesn't matter because in the moment they sooo get it.

You've got lots that get unlocked only after margarita No. 3. Sober You would be way too embarrassed to reveal your hidden Lohan agenda.

Admitting you always hoped you'd find your secret twin at summer camp, too

It's true, at least a little.

Now that your vision is clear, you clearly kickstart a whole new living room set-up. You almost definitely will get bored or tired or distracted and stop after dragging your couch into the middle of the floor, but that sounds like a Sober You problem.

Feeling very confident in testing a second language in conversation

Especially with a new person. I'd like to take this opportunity to apologize for the young man at that one Oakland bar who was very patient with my inexpert mastery and display of American Sign Language.

I try to do this sober sometimes and I promise people will point it out.

Sleeping through a movie you don't care about

Same as above. But when done drunkenly, you get a free pass to check out of Fargo if it ain't your bag.

"I'll get this round! Let's split a cab! My nachos didn't work out, but what about Seamless??" When sober folks act this way too often, therapy may be suggested.

Demanding the auxiliary cable in your ride home

Even though you obvs have tons of fire jams on your phone at all times, despite BAL. The tipsiness sets you free in a way that lets you share such fire jams with at least this one Uber gift. What a gift, indeed.