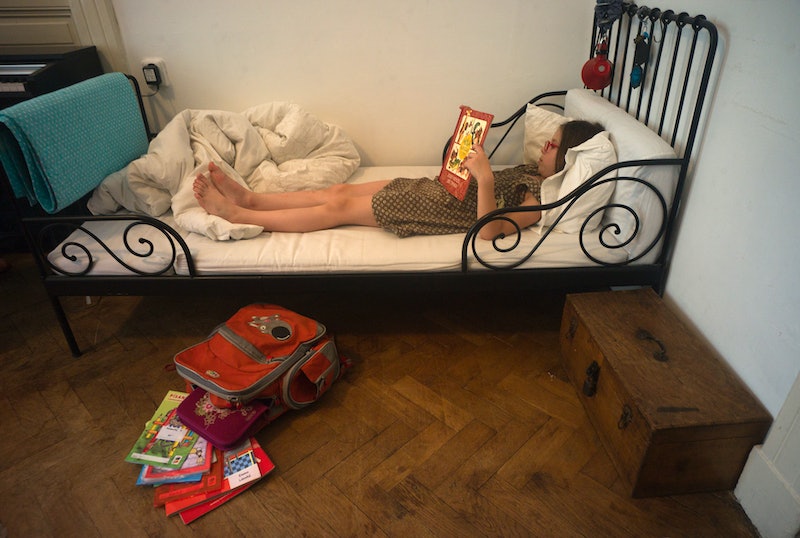 I don't know about you, but I don't enjoy ending a long day by just falling into bed and going to sleep. Sure, sleep is great, but going from full-speed to full-stop is, well, exhausting. It makes me feel as if I have no free time.

Instead of turning the lights out right away, I like to lie in bed and wind down. Most of the time, "winding down" is checking social media or chatting with a friend, which means using my smartphone. And, as we all know by now, smartphones wreak havoc on our sleeping patterns. On the nights when I'm afraid I won't get enough sleep, even using my phone to play an audiobook or podcast feels too risky.

If there's one tried-and-true method of winding down that won't make you cost you any sleep and make you feel worse in the morning, it's reading. Even book nerds, who are often offended at the idea that books can be so boring as to put someone to sleep, have to admit that reading in bed is one of the most relaxing paths to natural sleep.

Unfortunately, some books just weren't made for reading in bed. For every thrilling page-turner, there's a tome that will just make your eyes go unfocused and finally slip peacefully closed. A book doesn't have to be boring or badly written to put you to sleep; it just has to have the right density.

Here, I've chosen seven pretty great books that have put me to sleep at one time or another. Each of these titles has made this list for a different reason, but they all have one thing in common: if you ever hope to finish them, you'd better not read them in

Walden is about Henry David Thoreau's period of introspection spent in a cabin near Walden Pond. Its back-to-nature philosophy and explorations of man's true, uncivilized nature continue to garner praise and criticism today. But you should never go transcendentalist before bed, unless you want to fall asleep quickly.

Excerpt: "I went to the woods because I wished to live deliberately, to front only the essential facts of life, and see if I could not learn what it had to teach, and not, when I came to die, discover that I had not lived. I did not wish to live what was not life, living is so dear; nor did I wish to practise resignation, unless it was quite necessary. I wanted to live deep and suck out all the marrow of life, to live so sturdily and Spartan-like as to put to rout all that was not life, to cut a broad swath and shave close, to drive life into a corner, and reduce it to its lowest terms, and, if it proved to be mean, why then to get the whole and genuine meanness of it, and publish its meanness to the world; or if it were sublime, to know it by experience, and be able to give a true account of it in my next excursion."

Moby-Dick is a personal favorite book of mine, but I've encountered many people over the years who absolutely hate it. To that end, I'm willing to concede that it can be boring at some turns, but that it's a wonderful, harsh, and beautifully-written story. Also, there are whales.

Excerpt: "The fact is, that among his hunters at least, the whale would by all hands be considered a noble dish, were there not so much of him; but when you come to sit down before a meat-pie nearly one hundred feet long, it takes away your appetite. Only the most unprejudiced of men like Stubb, nowadays partake of cooked whales; but the Esquimaux are not so fastidious. We all know how they live upon whales, and have rare old vintages of prime old train oil. Zogranda, one of their most famous doctors, recommends strips of blubber for infants, as being exceedingly juicy and nourishing."

Bodies That Matter by Judith Butler

I read a large portion of this book for my capstone project in college. As an exhausted senior, I found myself nodding off while trying to make sense of Judith Butler's theories on gender. Bodies That Matter is an amazing book, but it requires your full attention.

Excerpt: "Instead of rehearsing the theoretical difficulties that emerge by presuming the notion of the subject as a foundational premise or by trying to maintain a stable distinction between sex and gender, I would like to raise the question of whether recourse to matter and the materiality of sex is necessary in order to establish that irreducible specificity that is said to ground feminist practice."

The Sound and the Fury is a wonderful novel, but it isn't the best choice for reading in bed. It's written in Faulkner's signature, stream-of-consciousness style, and has multiple narrators, the first of whom, Benjy, slips back and forth through time as events trigger his memories.

Excerpt: "The day dawned bleak and chill, a moving wall of grey light out of the north-east which, instead of dissolving into moisture, seemed to disintegrate into minute and venomous particles, like dust that, when Dilsey opened the door of the cabin and emerged, needled laterally into her flesh, precipitating not so much a moisture as a substance partaking of the quality of thin, not quite congealed oil."

I have mixed feelings about Charles Dickens in general, and, as much as I disliked reading A Tale of Two Cities, it's really pretty freaking great. I mean, it made me want to take up knitting. Knitting! Despite how good its plot is, this novel really drags at times, thanks to Dickens' overly wordy — though at times tongue-in-cheek — writing style.

I've despised Ayn Rand since Philosophy 101, but I decided to read her magnum opus in the hopes of writing about it and winning a scholarship. Massive books don't intimidate me, but — unless you're an objectivist — Atlas Shrugged is a dry and preachy volume. If you can get past the polemic tone, however, Rand's is a decent piece of dystopian fiction.

Excerpt: "To trade by means of money is the code of the men of good will. Money rests on the axiom that every man is the owner of his mind and his effort. Money allows no power to prescribe the value of your effort except the voluntary choice of the man who is willing to trade you his effort in return. Money permits you to obtain for your goods and your labor that which they are worth to the men who buy them, but no more. Money permits no deals except those to mutual benefit by the unforced judgment of the traders. Money demands of you the recognition that men must work for their own benefit, not for their own injury, for their gain, not their loss — the recognition that they are not beasts of burden, born to carry the weight of your misery–that you must offer them values, not wounds — that the common bond among men is not the exchange of suffering, but the exchange of goods."

The Last Man is often considered the first post-apocalyptic novel: an impressive achievement for a book published in 1826. Unfortunately, the book takes forever to get to the horrors of solitude. The opening builds a fairytale-esque world — in the 21st century — but it won't be enough to hold your tired, relaxing attention.

Excerpt: "The ex-queen had also a daughter, now twelve years of age; his fairy sister, Adrian was wont to call her; a lovely, animated, little thing, all sensibility and truth. With these, her children, the noble widow constantly resided at Windsor; and admitted no visitors, except her own partizans, travellers from her native Germany, and a few of the foreign ministers. Among these, and highly distinguished by her, was Prince Zaimi, ambassador to England from the free States of Greece; and his daughter, the young Princess Evadne, passed much of her time at Windsor Castle. In company with this sprightly and clever Greek girl, the Countess would relax from her usual state. Her views with regard to her own children, placed all her words and actions relative to them under restraint: but Evadne was a plaything she could in no way fear; nor were her talents and vivacity slight alleviations to the monotony of the Countess's life."