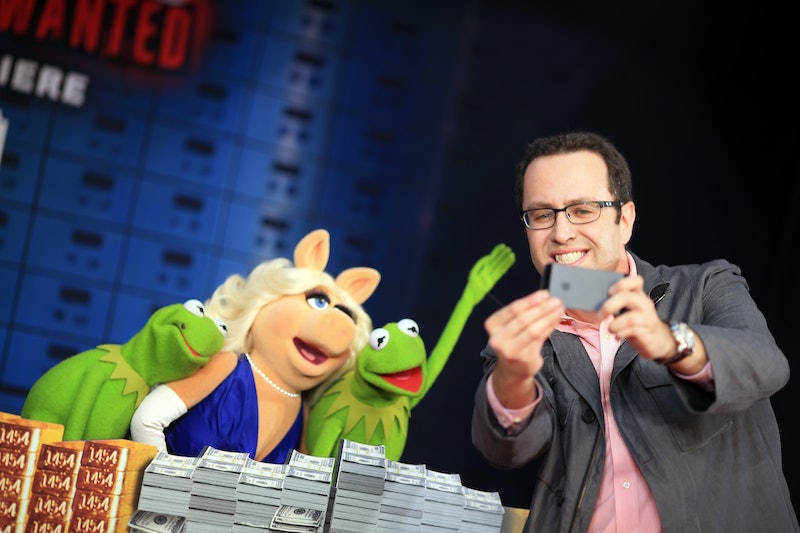 Indiana authorities on Tuesday raided the home of Subway spokesman Jared Fogle, who has acted as the face of the sandwich chain for the past 15 years. Although investigators would not specify what they were searching, a report out of CNN has speculated that the raid might be part of an earlier investigation into the head of the Jared Foundation, who was arrested two months ago on alleged child pornography charges. Although Fogle himself was not arrested or charged with a crime, concerns soon arose over Fogle's established role as a Subway spokesman and whether he'd ever work with the company again, given the sensitive nature of the current investigation.

"We are shocked about the news and believe it [Tuesday's search] is related to a prior investigation of a former Jared Foundation employee," said a Subway spokesperson in a public statement on Tuesday. Subway announced on Tuesday evening that it had mutually suspended its working relationship with Fogle amidst the controversy. Bustle has reached out to Subway spokespersons and is awaiting comment.

Media outlets pounced. Just hours after the news went public, the International Business Times questioned whether the company's connection to someone involved in such a sordid case was good for their image in the long haul, comparing the relationship to broken partnerships such as O.J. Simpson and Hertz Rent-A-Car, and billionaire business mogul (and GOP presidential candidate) Donald Trump and the slew of corporations that recently cut ties with him over his divisive commentary on Mexican immigrants.

An FBI spokeswoman, Special Agent Wendy Osborne, explained that the raid and the investigation itself was too sensitive to be discussed currently, and a U.S. Attorney's Office source told CNN that it would not confirm the purpose of the investigation either. Typical protocol, of course, but troubling news for Fogle, whose role in the case continued to be scrutinized by social media.

Fogle's attorney, Ron Elberger, maintained that his client had been "cooperating, and continues to cooperate, with law enforcement in their investigation of unspecified charges, and looks forward to its conclusion" in a statement to the media on Tuesday. CNN affiliate WTHR also confirmed that Fogle's wife and children had left their home earlier in the day to avoid the commotion.

Considering the slew of popular athletes and public figures already on the official roster, the Subway's suspension was probably the best move. And keep in mind that it's apparently a mutual suspension of the relationship, not a termination. But the move didn't necessarily sit well with Fogle's neighbors, many of whom called him a quiet, but helpful family man who had served the community well and had allegedly never been officially involved with the original child pornography case brought against his foundation's director.

"The only thing I ever see around his home are happy people doing their yard, waving," said one of Fogle's neighbors, Catherine Hoffman, in a comment to WTHR. "I'm shocked and saddened for a great figure in our community ... [and have] nothing bad to say about him."