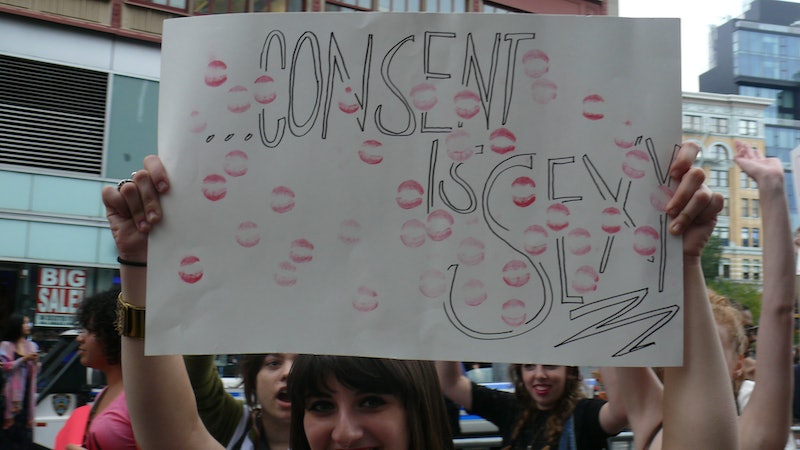 More and more people and laws are encouraging affirmative consent, the standard that considers only a "yes" to constitute sexual consent, not just a lack of "no." But not everyone's on board with that. People often argue that communication in the bedroom "kills the mood," and unfortunately, we don't always see people asking for "yes"es in movies or TV shows, perpetuating the myth that silence is sexy. In fact, we often see scenarios passed off as consensual because there wasn't a "no" — and sometimes, as we saw on Game of Thrones and Girls , even scenes that do include "no"s are hotly debated.

Getting a "yes" doesn't have to be uncomfortable or un-sexy. In fact, asking for consent can help the mood by making it easier for your partner to relax and feel secure, no matter how the question is posed. But in case you feel like communication takes you out of the moment, these scenes prove it doesn't have to.

If you're not sure how to gage your partner's boundaries or make your own crystal clear, you can take a lesson — and even borrow a few lines of dialogue — from these fictional characters.

Natalia is crystal clear about her preferences, telling Adam the first time they have sex, “I don’t like to be on top that much. Or soft touching, because it tickles me and takes me out of the moment. But everything else is OK.” At the time, he responds, “I like how clear you are with me.” However, he doesn't like how clear she is when she tells him “No. Look, I didn’t take a shower today,” and “No, no, no, no, not on my dress!” during a later episode. So, you know, actions speak louder than words.

"Are you sure?" Caleb asks Hanna before their first time in a romantically lit tent in the woods. "I'm sure," she assures him confidently. Simple as that! Haleb forever.

3. James and Em in Adventureland

After the unconventional preparatory act of removing his socks, James asks Em, "Are we doing this?" to which she responds, "Yeah, I think we are." Short, sweet, and appropriately awkward.

4. Ron and Veronica in Anchorman: The Legend of Ron Burgundy

If you're looking for a more, er, colorful way of making your intentions clear, you can take a pointer from Anchorman's part-sex-scene, part-dream-sequence, where Veronica instructs Ron, "Take me to Pleasureland!" and he reassures her, "Oh, we're going there!" I should add the disclaimer that I don't condone the majority of Ron Burgundy's behavior.

5. Blair and Chuck in Gossip Girl

It's sad that I have to keep qualifying these by saying "but he was a rapist in another episode," but... Chuck was at least an attempted rapist in another episode. In this episode, though, when he first gets together with Blair true Gossip Girl style in the back of a cab, he asks "Are you sure?" and she indicates her consent by leaning in and kissing him enthusiastically. In real life, though, one would hope he (and she) would ask again before it went beyond kissing; "Are you sure?" can mean a lot of things.

6. Cynthia and John in Sex, Lies, and Videotape

When Cynthia finds John on the bed wearing nothing but a philodendron covering his you-know-what, she asks, "Is that for me?" When he responds in the affirmative, she then removes it and asks, "Is that for me?" Though I'm not sure when you'll have the opportunity to recreate that scenario, it's refreshing to see a woman asking a man for consent. Well, I guess Anchorman sorta counts, but that one's gonna be really hard to recreate with the unicorns and all.We could still stand to see a lot more explicit consent on-screen, especially more men being asked for consent and more men whose requests for consent don't redeem them from being rapists in other parts of the show. Just sayin'.

More like this
The Best Time To Date After A Breakup, According To Experts
By Bustle Editors
7 Women Share Their Best Orgasm Stories
By Lexi Inks
Are Virgo & Capricorn Compatible In A Relationship?
By Kristine Fellizar
How To Use Astrology In Dating, According To The AstroTwins
By Brittany Beringer
Get Even More From Bustle — Sign Up For The Newsletter