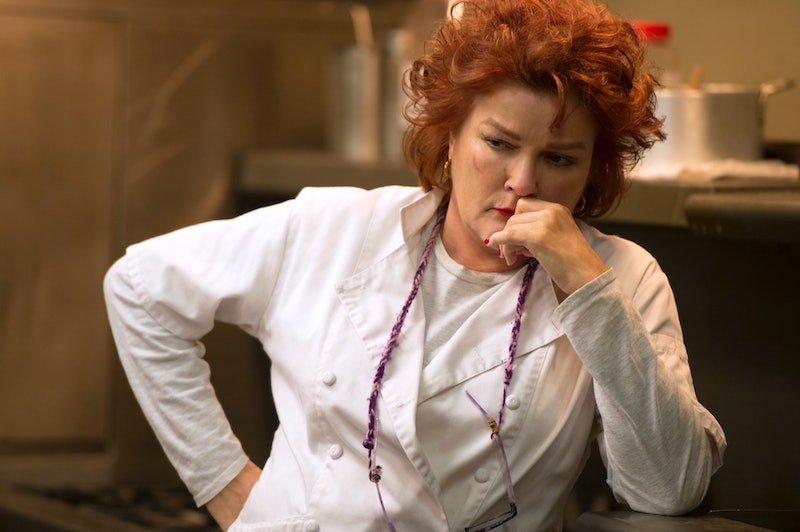 Many characters leave Litchfield on Orange is the New Black, but rarely in a traditional way. Galina "Red" Reznikov has been at Litchfield for about a dozen years. When will she get out? Forget about the elusive and magical chicken; the former member of the Russian mafia could be back in Queens before we know it.

In the season three premiere, we learned that Red has two years left on her sentence. That's not a lot! She's already started thinking about her future on the outside. However, at the rate that Orange is the New Black has been going, it would take years longer to see Red released on time. The first three seasons haven't even covered a single year in story time.

Could she possibly start looking for ways to get an early release? In the same scene where we learned about Red's light at the end of the (figurative) tunnel, we learned that several inmates were being granted early release under Caputo's new management. Red has plenty of reasons to want to be out of jail right now. She may be developing real feelings for Mr. Healy after flirting with him to get her way. She certainly needs to see to her store.

I also predict that the arrival of Judy King, a bona fide television cooking show host, will cause yet another power struggle in the Litchfield kitchen. King seems well-placed to become the villain of next season. She's a little bit Piper and a little bit Red. Plus, she's already got the loyalty of several of the inmates, thanks to her fame. Now that Red and Gloria have finally learned to work with one another (or at least to commiserate together) the addition of this new character should be a welcome kitchen shakeup.

This is why I think Red may give up on her Litchfield career goals and start looking toward the outside. When Orange is the New Black returns for season four in 2016, all of the characters will be facing new challenges. The new inmates will shake up established cliques. I suspect that Red won't be the only character with a new objective. She's fought for a long time, and she's been inside for many years as well. Perhaps she'll decide to stop fighting within and try fighting her way out. Believe me, if anyone was going to flip a switch and manipulate her way into getting out on good behavior, it's Reznikov.

More like this
Everything To Remember From 'Stranger Things 3' Before Watching The New Season
By Gretchen Smail
'Heartstopper's Kit Connor Revealed His Hopes For Season 2
By Nola Ojomu and Sam Ramsden
'Gentleman Jack’s Cast & Crew Are Keen On Season 3, Too
By Frances Stewart
'Ghost In The Shell: SAC_2045' Was Only Supposed To Last Two Seasons
By Kadin Burnett
Get Even More From Bustle — Sign Up For The Newsletter