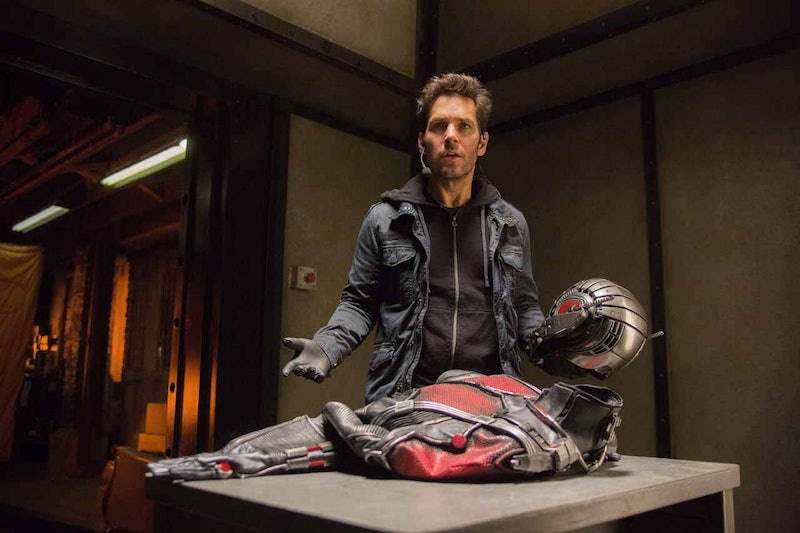 Back in 2012, Marvel Cinematic Universe fans all over the world were treated to the experience of a lifetime when they finally got to see Iron Man, Captain America, Thor, and the Hulk team up onscreen together for the first time in Marvel's The Avengers. That film was the culmination of "Phase One," the groundbreaking inaugural chapter in the Marvel Cinematic Universe. It's only natural, then, for audiences to assume that May's The Avengers: Age Of Ultron was similarly the concluding film in the MCU's Phase Two — and that July's new Marvel film Ant-Man would be the first entry in Phase Three. However, this surprisingly isn't the case: Turns out, Marvel actually considers the upcoming bite-sized hero to be Phase Two's crown jewel... and Marvel President Kevin Feige is here to explain why.

In an interview with The Hollywood Reporter , Feige — aided by his Ant-Man star, Paul Rudd — described how the MCU's next film is both "the pinnacle and finale of Phase Two." This decision is admittedly a bit confusing: made for a paltry $130 million in comparison to Ultron's massive $250 million price tag, Ant-Man seems like a strangely quiet coda for the studio. It's "a more intimate story," Feige acknowledged. "When you've had aliens pouring into Manhattan [...] the notion of shrinking down, to have an arena that is not another city or an entire planet or a fictional place like Asgard but is a bathtub, or is a rug, or is a little girl's play set — that felt like a great opportunity to deliver Marvel's thrills and action in a totally different way."

So why did Feige choose this "intimate" film to close out Phase Two instead of the super-sized Ultron? And, furthermore, why didn't Marvel Studios simply flip-flop the dates, with Ant-Man coming out in May and Ultron in July? Apparently, there's an explanation for that too: According to Feige, it's because Ant-Man will acquaint viewers with some concepts that will be particularly crucial for Phase Three (beginning next May with Captain America: Civil War ).

"There is so much in Ant-Man," Feige teased in the interview. "Introducing a new hero, introducing a very important part of technology in the Marvel universe, the Pym particles. Ant-Man getting on the Avengers' radar in this film and even — this is the weirdest part, you shouldn't really talk about it because it won't be apparent for years — but the whole notion of the quantum realm and the whole notion of going to places that are so out there, they are almost mind-bendingly hard to fathom. It all plays into Phase Three."

For those casual MCU fans who aren't steeped in decades worth of comic book lore, allow me to (briefly) explain: Pym Particles are subatomic particles discovered by Hank Pym (played in the film by Michael Douglas), the first man to adopt the alter-ego of "Ant-Man." They are what allow a person to decrease or increase in size, usually by inhaling a gas released by the Ant-Man suit. It remains to be seen what larger role the Pym Particles will play in Phase Three, but the specifics of how they work is pretty clearly crucial... and ties in to that "quantum realm" Feige mentioned.

According to the comics, Pym Particles work because they actually shunt excess matter into an extra-dimensional plane called the Kosmos Dimension when shrinking — and pulling that matter back out again when enlarging. The idea of parallel dimensions hasn't really been explored in the MCU yet, so this explanation will help pave the way for the studio's strange st hero yet: Doctor Strange, arriving with his first solo film in Nov. 2016 starring Benedict Cumberbatch.

So far, most of the MCU has been grounded in some form of vague pseudo-science, with Thor being the most fantastical hero yet. But, with the Doctor Strange film, Stephen Strange will take that fantastical-ness to a whole new level; also called the Sorcerer Supreme, his powers are essentially magic: They allow him to cast spells, stop time, and transcend multiple dimensions. Who would have thought Ant-Man, which is about a shrinking thief out to redeem himself in the eyes of his daughter would pave the way for Marvel's most bizarre movie to date?

As for Rudd, he's already neck-deep in filming for next year's Civil War. Although he won't reveal whose side he lands on — Iron Man's or Captain America's — he sounded like a kid in a candy store when describing his experience on the project to The Hollywood Reporter : "When I went to the set of Civil War, I was 10 years old. There's Captain America, there's Iron Man. And not only that, but I'm doing scenes with them, calling them by their names. That feeling of excitement, the surreal nature of it is the best, it was great. I really felt for the first time part of the Marvel Universe."