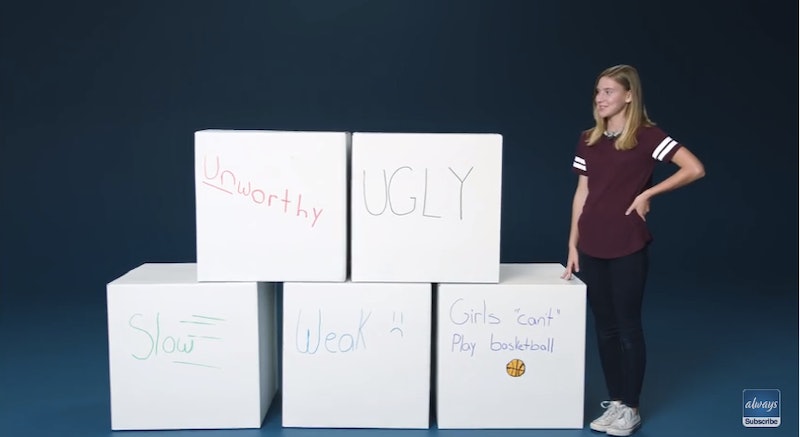 Whenever a new video from Always' #LikeAGirl campaign hits the Internet, I get goosebumps. The videos, which redefine what it means to do something "like a girl," strike the perfect balance between inducing outrage at stereotypes about women and girls and inspiring positivity for what we can do to break down those stereotypes. The newest installment, "Unstoppable," is no different, because girls and women are unstoppable, and should be celebrated as such.

"Unstoppable" begins by asking girls if they feel society limits them, and — shock of shocks — all the girls respond that they do. Then the girls are told to draw those limitations on boxes, and then to quite literally destroy them. The girls kick, punch, and knock over the boxes, which represent what they "can't" do. Finally, one of the girls picks a new word to describe herself: "unstoppable."

I know it's easy to be cynical about campaigns like this. After all, all advertising has an agenda beyond empowering women, and that's to sell stuff. Furthermore, no campaign is perfect. Maybe, as Bustle's Elizabeth Licorish suggested earlier this year, we should tell girls to do things #LikeAWoman instead of #LikeAGirl (you know, since boys are told to do things "like a man"). But still, I can't help but feel like the #LikeAGirl campaign is a really positive step for advertising.

Women and girls receive constant messages from advertisers that we aren't good enough. We face a continual stream of negativity that tries to get us to hate ourselves because of our myriad flaws, and then to buy products to fix them. People are always going to try to sell us things, so why not at least sell us stuff with positive, empowering messages?

Let's take a look at some of the video's highlights:

Of course, the question is basically rhetorical. We clearly limit girls. But how do we do it? That's what the rest of the video gets at. We're told that ...

2. "Girls Should Be Perfect"

This girl nails it in terms of getting to the heart of a huge issue in the way women are socialized: We're faced with impossible standards of perfection.

This, right here, is why we need female superheroes. We need female characters who kick ass because this little girl deserves a role model as fearless and unstoppable as she is.

Sorry, but if this over-the-shoulder shot of a girl writing "girls aren't strong" doesn't make you realize that we send really messed up messages to girls about their abilities at incredibly young ages, then you are soulless.

Why yes, that is a hammer she's using to smash the sexist talk that's been unceremoniously forced upon her since she was in utero. Why do you ask?

Knock over those limits, girl.

I think I just died of happiness when this girl stood on the box that says "can't be brave" with an X through it.