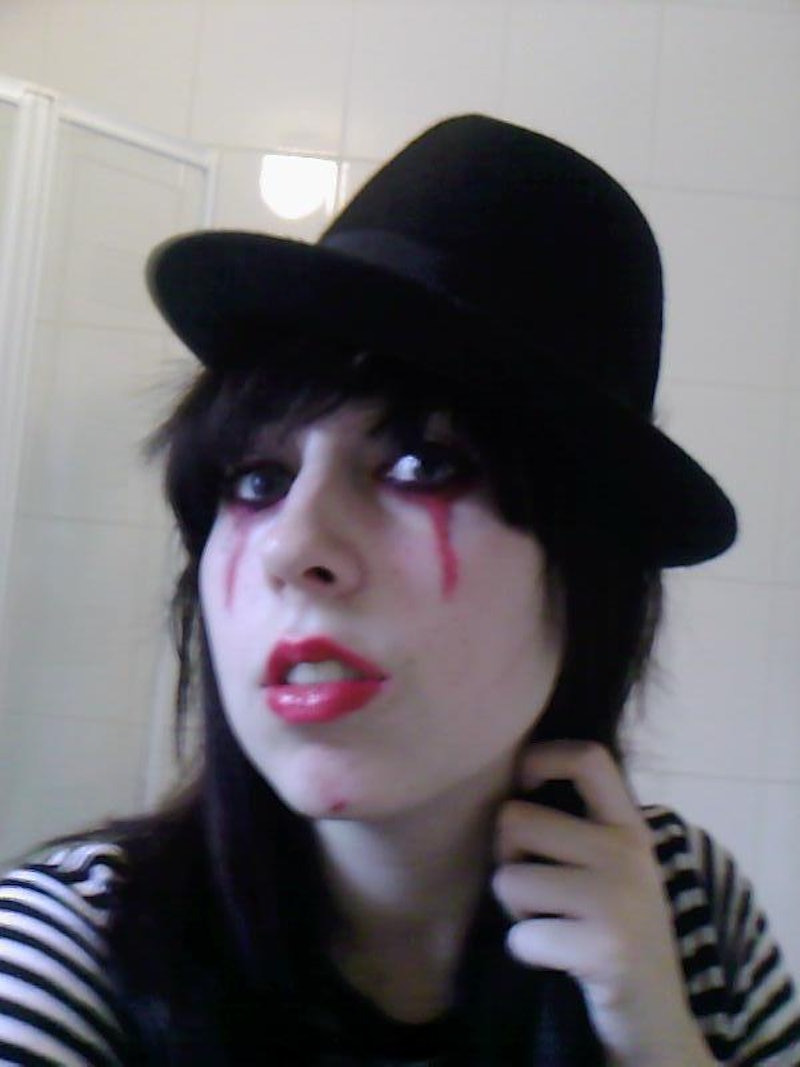 Sometimes, I kind of miss being an emo kid. The clothing was like a uniform: Always skinny jeans, always a studded belt, always a band T-shirt, and usually a stupid amount of children's accessories (maybe any amount of children's accessories is a stupid amount). Subscribing to the emo culture wholeheartedly (whole-broken-heartedly?) was "not a fashion statement," though, it was "a death wish." This My Chemical Romance lyric summed up the notion that being an emo was not just about clothes, but about showcasing the deep emotional issues that trouble many teens through the clothes. It was a way of life born out of the world's first exposure to social media and arguably, it was the last true subculture. So why is the emo way of life (with a particular emphasis on emo fashion) so easily mocked now?

Looking back on all the poor outfit choices and all the cheesy camera angles, I can definitely understand why people find it so easy to take the piss out of being an emo. Now that I'm old enough to be over the embarrassment of how dedicated I was to the world of grimness, I can reflect on it with a sense of humor and nostalgia. Who knows? In eight years I might be looking back at my era of tackiness with the same amusement. Heck, maybe in eight years I'll be watching teens around me rocking raccoon tail extensions and too much eyeliner.

According to What Does The Internet Think, search results for "emo" yield over 13,000 negative hits and only 1,000 positive ones. Statistically, that means 88.6 percent of the Internet hates emo fashion while only 11.3 percent looks back upon it with nostalgia.

There are multiple superficial reasons for finding emo fashions repellent, but some aspects of the movement have arguably stuck with us nonetheless. Although mom jeans have made a strong comeback over the past year, most of us still tend to stick to skinny jeans. (Who would be caught dead in a bootcut outside of 2003?) Most people have carried their winged eyeliner through to their 20s as well. The more obscure your band T-shirt at a bar? The cooler you come across. Oh, and let's be honest, emo kids basically invented the selfie:

What we're failing to remember when we pile on the emo shame is the impact the subculture had on so many Millennials. Being an emo kid didn't just supply me with a uniform to wear every day and an easy way to being alternative, but it provided me with a sense of self — a sense of belonging that I was very much lacking in my small town. Wearing those clothes represented who I was at a glance to anybody who understood: I was sad, I listened to a lot of My Chemical Romance, and I was bored by the dominant culture. I became emo at the age when being a teenage girl turns into the worst experience of your entire life (approximately 13), especially when the amount of bullies you have outweighs the number of friends you have.

More than all of this, though, "emo" represented the impact that the Internet had already had on my life. I'd found a community online where I not only felt welcome, but understood. As I joined "PC 4 PC" bulletin chains on MySpace, I was finally being noticed by my peers. I was finally being liked by my peers. By wearing the MCRmy (My Chemical Romance Army) uniform, I felt like I belonged to a group in a way that I'd never gotten to experience before. Whether the movement had meaning or not, wearing those clothes made me feel like I meant something.

Through being an emo, I felt able to express the overwhelming amount of emotion that every teenager likely feels. It was an outlet for the hormone-induced rage frenzy that so many people go through as soon as they hit 13 — something that kind of dwindles as you start to hit your later teens. The emo movement took the angst right out of the pages of The Catcher in the Rye and put them forward to the public. We openly declared that we constantly felt like we were on an emotional roller coaster, and we reveled in it. Public displays of feelings and thoughts were key to being an emo kid and as a thoroughly depressed and lonely teenager, I can't look back and see that as a bad thing.

By dressing alike, the emo movement allowed us to express all those feelings through clothing choices and hairstyles. "Emotional" became a dress code that allowed us to recognize each other in the street. There's no doubt in my mind that for many, being emo was just about the "look." For me, though, the "look" represented a whole lot more.

Through our clothes and music, we let the world know that its teenagers were struggling and that said struggling was completely normal. With so many people subscribed to the emo way of life, it seemed to normalize the feelings that we were going through. By walking through fast fashion retailers and seeing so many humans and mannequins dressed in the same way, we no longer felt abnormal. We didn't just need song lyrics to speak to us. We needed clothing with which we could send coded messages to each other. You might not fit in and that's OK. You might hate that you don't fit in, and that's OK, too.

To the outside universe, it's hard to explain how important the feeling of belonging that dressing like an emo kid gave me truly was. As for the teens of the future, maybe they'll understand the message better. For now, I'm happy enough taking the piss out of my My Chemical Romance poster collages and studded belts, but I won't underestimate how much the emo subculture saved me.