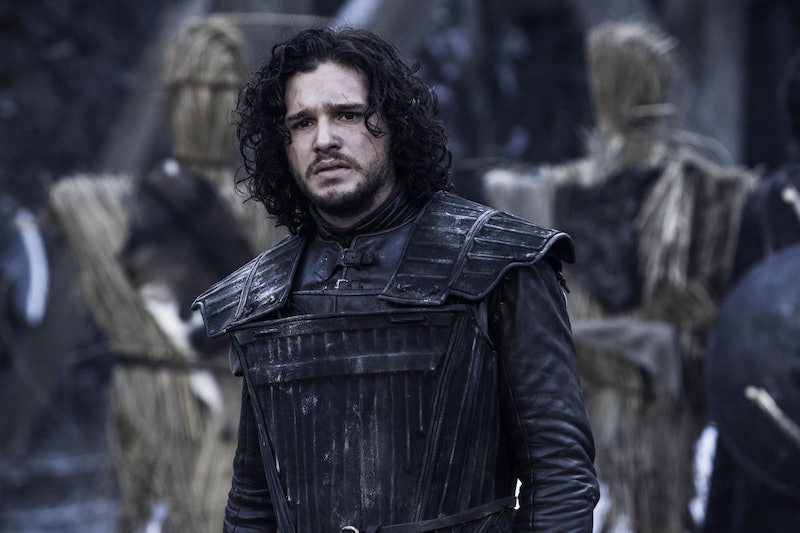 I'm convinced of it: In Game Of Thrones, Jon Snow lives. I know, I know: I watched Olly and the traitorous Night's Watchmen stab him during the fifth season finale too. I even saw when he bled out onto the snow. However, too many signs and quotes that point to Jon Snow being alive have me convinced that there's literally no chance of never seeing him again. I mean, the way he died is proof enough alone, in my opinion: When you really think about it, Jon met too pitiful of an end: he was stabbed by some bitter men, and a little boy who knows nothing about the world. Surely, if a character as significant as Jon had really died, he'd receive a much more eloquent death then the one he received. Also, I’m an avid R + L = J believer, and I remain convinced that Jon Snow is an essential component to the entire story.

Furthermore, when Kit Harington, who plays Jon, spoke with Entertainment Weekly about his character's death he said, "I’m dead. I’m not coming back next season. So that’s all I can tell you, really." Please note that Harington said "next season," meaning Season 6 — he said nothing about Season 7.

If all of this doesn't convince you, then you should consider this before making up your mind: First and foremost, Melisandre arrived at Castle Black right around the time of Jon's "demise," and a popular theory is that she may end up bringing him back to life in some form. Second, when Jon was stabbed his eyes may have changed color — indicating he's possibly more than human.

If you still don't believe me, I have proof right from Jon Snow himself. Here are eight quotes from Jon himself that prove he isn't dead:

1. "All that time I was gone, it was as if I went to sleep for year. And when I woke up, the world's fallen apart."

Jon Snow says this in the promos for the fourth season of the series. Though he doesn't actually say these words during the season, they are still extremely poignant — and I wouldn't put it past showrunners D.B. Weiss and David Benioff to foreshadow Jon's potential resurrection well in advance. If Jon won't be appearing again until Season 7, as I'm theorizing, a lot is going to happen in his absence — Westeros could very well fall apart in Season 6.

2. "The White Walkers don't care if a man's free folk or crow. We're all the same to them, meat for their army."

When Jon encountered the White Walker's at Hardhome, it was only his Valyrian word that saved him. Still, the Night's King seemed a little bit too interested in Jon — could this mean that he's seeking out the Lord Commander to join his ranks as a White Walker?

3. "Sometimes there is no happy choice Sam, only one less grievous than the others."

Jon Snow has been dealt a pretty crappy hand since birth. As a bastard, he was in many ways ostracized from his family, and then he was sent off to defend the Wall. If offered a chance to be resurrected — even if it comes under less than ideal circumstances — I can't see Jon turning down a chance to do things differently.

4. "The Long Night is coming, and the dead come with it."

So, mostly, I think that Melisandre is full of it. Other than birthing The Shadow, I don't ever recall her actually doing anything really magical. Still, she's a Lord of Light worshiper, and we've seen that his worshipers can come back to life. If Melisandre is going to last on GoT any longer, it better be because she will be bringing Jon back from the dead.

So this quote is a bit sad considering the fact that four of the Starks have already been brutally murdered in Game of Thrones. Still if the R + L = J theory is correct, Jon is still a Stark — but he would also be a Targaryen. I can't imagine that a person with that combination of blood would be easy to take down.

6. "The more you give a king, the more he wants. We are walking on a bridge of ice with an abyss on either side. Pleasing one king is difficult enough, pleasing two is hardly possible."

More possible foreshadowing! If Jon is going to come back for the Throne, this quote could indicate that he'd be rather ruthless. Jon is known for his fairness and mild manner. However, greed and power can often consume a person — just look at Stannis and the choices that he made. If Jon comes back, he could very well want the Iron Throne for himself.

The mystery of Jon's parentage still hasn't been solved, which mean his death can't be permanent — it would be wholly unjust to leave both the viewers and Jon himself in the dark about his mother's identity!

8. "I'm not asking you to forget your dead. I’ll never forget mine."

Jon does not have a vengeful personality, he's honorable almost to a fault. However, should he be resurrected as something more than human, I'm almost certain he will out for blood. Jon has lost so much, and without his humanity to stop him, he's going to want others to pay for what he's lost.