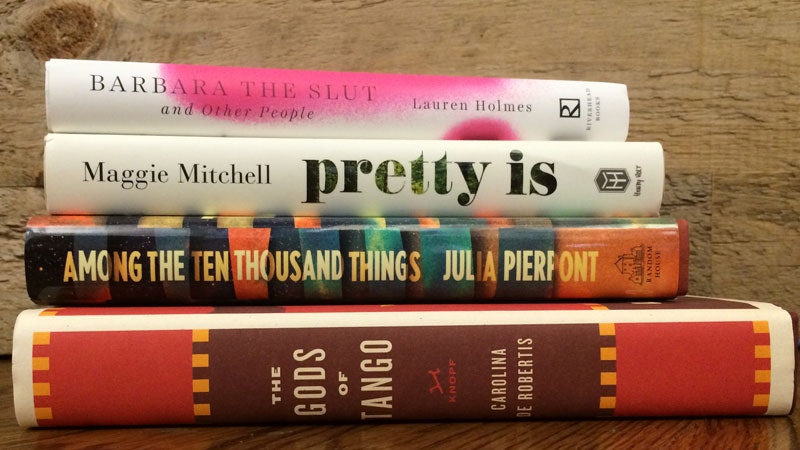 Although many of summer 2015’s best books are wildly original, lots of them share themes, plot points, and language with titles you've fallen in head over heels for in the past. (And, hey! Chances are that the classic novels you hold near and dear are held just as close by writers working today, and perhaps have inspired those writers when they’re churning out their own books. Food for thought?)

Take a peek at this list of 11 classics, both old and modern. See one you like? You just might enjoy reading its corresponding summer 2015 book, either for its subject matter, prose style, tone, or position on the creepy to lovely spectrum. Happy pickin'.

If you loved Twenty Thousand Leagues Under the Sea by Jules Verne...

...then read The Watchmaker of Filigree Street by Natasha Pulley

For those readers setting aside percentages of their paychecks toward the purchase of a pair of copper bioshock goggles (and maybe a wrist compass-sundial hybrid to match), The Watchmaker of Filigree Street by Natasha Pulley will feel like a gift from Captain Nemo himself. In her Victorian-set debut novel, Pulley includes some hardcore steampunk details — like a clockwork octopus, a synesthetic piano genius-turned-telegraphist, and the wonders of Japanese artistry — but imparts her story with a high-literary bent that 21st century dwellers (especially those who wish it were the 19th) will love.

If you loved Love in the Time of Cholera by Gabriel García Márquez...

...then read The Gods of Tango by Carolina de Robertis

Gabriel García Márquez's modern classic Love in the Time of Cholera and Carolina De Robertis' The Gods of Tango both begin with two young people in love; and the stories that follow are both brimming with passion and rife with rich, evocative language. And, like Márquez's novel, The Gods of Tango isn't a traditional love story: rather, De Robertis' sweeping Buenos Aires-set work is concerned more with the passion between a woman — who chooses initially out of necessity, and then by preference, to live as a man — and the tango music he comes to live for.

If you loved The Catcher in the Rye by J.D. Salinger...

...then read Barbara the Slut and Other People by Lauren Holmes

Ah, to be young and definitely not in love. Like the alienated Holden Caulfield, the characters in Lauren Holmes' short stories shun phoniness, choosing instead to reveal the truth of growing up (a process that doesn't end at 18, BTW) in all its horrifying awkwardness. Salingerites will delight in Holmes' fearless debut story collection, in which Caulfield's angst and verve — and Salinger's effortlessly cool prose style — is refreshingly evident. Also like The Catcher in the Rye, you'll devour Barbara the Slut and Other People in two sittings, max, then flip right back to the beginning.

If you loved The Handmaid's Tale by Margaret Atwood...

...then read The Beautiful Bureaucrat by Helen Phillips

Dystopia freaks, this one's for you. Like Margaret Atwood's groundbreaking The Handmaid's Tale , Helen Phillips' The Beautiful Bureaucrat imagines a near future in which the greed and bullying rampant in bureaucratic institutions leaks its toxicity into day-to-day life. The Creep Factor is off-the-charts in The Beautiful Bureaucrat, but so is the quality of the prose, the magnetism of the narrative, and the emotional resonance.

If you loved Rebecca by Daphne du Maurier...

...then read Eileen by Ottessa Moshfegh

Speaking of creepy. Where Daphne du Maurier's doomed, unnamed heroine was haunted by the spirit of her husband's late wife, Ottessa Moshfegh's Eileen is haunted by more corporeal concerns: like her father's alcoholism, her nightmarish job at a boys' prison, and her own murderous (pun... intended?) ennui. And where Daphne du Maurier revived literary gothicism for the 20th century, Moshfegh just might do for the 21st.

If you loved Trilby by George du Maurier...

...then read Pretty Is by Maggie Mitchell

Two takes on Stockholm Syndrome: first is George du Maurier's 1894 novel Trilby, from which sprung Svengali, one of literature's most feared (and most blatantly anti-Semitic, but that's another post for another day) villains; and second is Maggie Mitchell's Pretty Is, which offers a subtler imagining of what happens when young girls are taken captive — and become captivated — by an older man. Unlike du Maurier's classic, Mitchell's newest cools it on the ick factor, which makes her story about two abducted 12-year-olds — told in their alternating perspectives, 20 years after they are set free — all the more affecting and relevant.

If you loved Emma by Jane Austen...

If you consider Emma your favorite Jane Austen novel, you probably enjoy tasteful flower arrangements, Clueless (duh), Coco Chanel, and Meg Cabot's The Princess Diaries series. You may also be a sucker for a traditional wedding, in which case Meg Cabot's latest PD installment — her first adult addition to the YA series — is exactly your cup of tea (splash of milk, squeeze of lemon, drop of honey, thanks): in Royal Wedding, Mia Thermopolis gears up to marry OTP Michael Moscovitz. Spoiler alert: this wedding tops Emma and Mr. Knightley's.

If you loved The Crying of Lot 49 by Thomas Pynchon...

...then read You Too Can Have a Body Like Mine by Alexandra Kleeman

Consumerism and alienation: big themes in mid/late 20th century literature, even bigger themes today. Thomas Pynchon's 1966 novella The Crying of Lot 49, now a cult classic, plumbs the corruption and conspiracy inherent in large corporations. Alexandra Kleeman's debut novel You Too Can Have a Body Like Mine sticks closely to Pynchon's ouevre, delivering a biting social commentary in the form of a psychedelic, dizzying narrative(ish). Both reads are best enjoyed with a Tequila Sunrise (or something less, you know, legal).

If you loved Romeo and Juliet by William Shakespeare...

...then read The Sunlit Night by Rebecca Dinerstein

Frances and Yasha, the lovers central to Rebecca Dinerstein's graceful and beautiful debut novel The Sunlight Night, are neither tragic nor star-crossed. But if you love Shakespeare's Romeo and Juliet, you probably really love love, in any of its myriad iterations. And Dinerstein's novel offers one of literary love's most promising modern guises, painting an intoxicating portrait of the love that blooms between two lonely young people.

If you loved And Then There Were None by Agatha Christie...

...then read In a Dark, Dark Wood by Ruth Ware

Do you worship at the altar of Agatha Christie, Dashiell Hammett, Patricia Highsmith, et. al.? Do you wish on every errant eyelash for a mink stole and a tube of MAC's Ruby Woo lipstick? Is "The Unicorn and The Wasp" your absolutely unrivaled favorite Doctor Who episode? Even murder mystery purists like you will fall for In a Dark, Dark Wood, British crime writer Ruth Ware's latest. Though set at a bachelorette party in the Northumbrian woods rather than a glamorous mansion/train car/vicarage, In a Dark, Dark Wood packs a noirish punch that would make the Queen of Crime herself proud.

If you loved Lady Chatterley's Lover by D.H. Lawrence...

...then read Among the Ten Thousand Things by Julia Pierpont

D.H. Lawrence's 1928 novel Lady Chatterley's Lover broke ground for its candid exploration of infidelity, of sexual liberation, of blurring class lines, and also for printing the words "f*ck" and "c*nt." Julia Pierpont's stunning debut novel Among the Ten Thousand Things explores similar themes, revealing the complex, destructive aftershocks that ripple through a family when a husband and father cheats on his wife — and, by extension, his children. Like Lady Chatterley's Lover did for 1920s society, Among the Ten Thousand Things magnifies the smallness of 21st century domesticity until it warps and shatters in the most painfully beautiful way. (It also, incidentally, prints the words "f*ck" and "c*nt.)