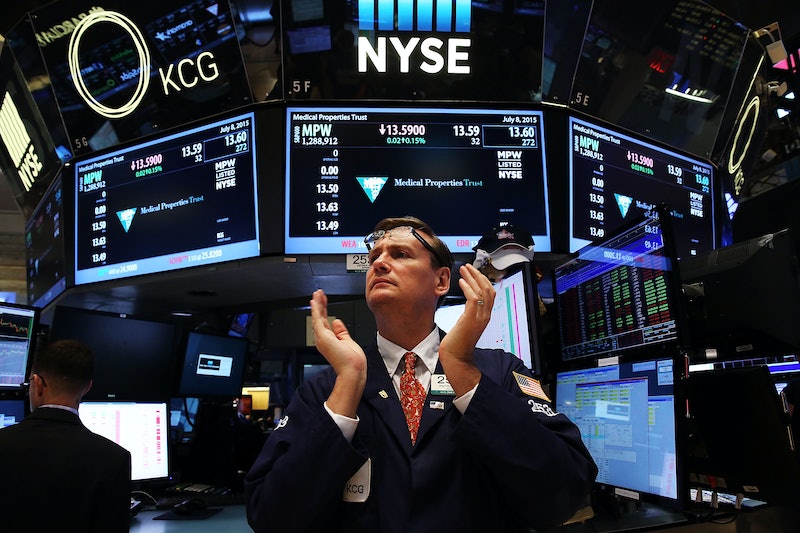 The New York Stock Exchange was restored after going down for almost four hours earlier today, but what if the NYSE crashed forever? It wasn't something we needed to worry about for long, luckily, as the exchange came back online about three and a half hours after a reported technical glitch caused the failure. At the moment it isn't entirely clear what the glitch was, but hacking appears to have been ruled out.

Stock exchanges have crashed before, with limited blowback, such as when NASDAQ went down in 2013 for over three hours. But today's glitch, paired with similarly timed technical failures at The Wall Street Journal and United Airlines, as well as a cryptic Tweet from hacktivist group Anonymous had Americans starting to panic. The bizarre coincidences seemed indicative of something far more sinister coming, and as the NYSE building emptied, some worried that the exchange would never get back up on its feet.

But nothing terrible has happened (so far) and all systems are back on track. But most importantly, even if the NYSE had stayed down, it wouldn't be the impending doom that everyone was worried about. In fact, the panic could actually be fairly well contained by common sense.

Fears about stock exchange crashes are natural, considering the last time the stock market took a hit, America found itself in an 11-year depression, the worst and longest economic crisis to ever hit the country. Current stock crashes in China and the impending economic collapse of Greece have stock holders (and people in general) nervous. But the market is much different than it was in 1929, or even in 2001, which is when the last time NYSE systems went down.

Despite the grueling recession we're coming out of, unless the entire stock market crashes completely, one exchange going down does not mean total economic collapse. In 2001, the NYSE handled 80 percent of the market's shares and trading. Today, the NYSE covers approximately 24 percent. The rest of the market is handled by other exchanges such as NASDAQ or Bats, which means that in a situation like today, if one market goes down, electronic sharing allows the other exchanges to take over handling stocks. Despite the technological glitch, much of today's stock trading went on without disruption.

However, if the exchange were actually brought down by hacking, as many suspect might have happened today, there might actually be valid reason to be concerned. If the NYSE were hacked, it stands to reason that other exchanges like NASDAQ could as well. A collapse across various exchanges would have drastic results on the economy and leave the country financial and economically vulnerable. In such a situation, the stock market would inevitably nose dive, and the security implications could mean that even the government of national security servers could be at risk.

But until that happens (if it happens), we have no need to worry. The stock market is surprisingly resilient, and prepared to handle a variety of emergencies. So put down your tinfoil hats and enjoy scrolling through your Twitter feed.