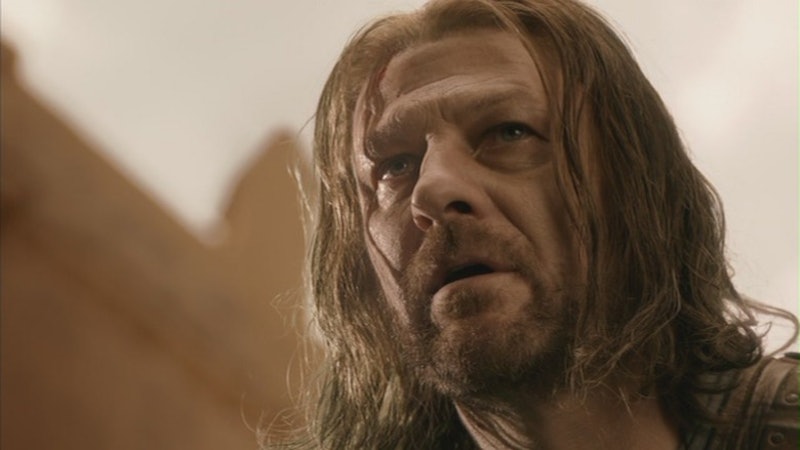 Nine and a half months is a long time to wait between television seasons. Six years is even longer to wait between books in a series. So, it's completely understandable that to kill time, some Game Of Thrones fans have come up with crazy theories about events in George R.R. Martin's fictional world. But, I think the author might want to consider hurrying up and getting The Winds Of Winter published, because some of these theories are starting to make me concerned for the sanity of this fanbase. Seriously, some Game of Thrones fan theories just need to be ignored.

There are theories that make so much sense they're practically considered canon: Like the theory that Jon Snow is secretly the child of Rhaegar Targaryen and Lyanna Stark. There are others that have plenty of textual support, but may or may not turn out to be true: Like the Grand Northern Conspiracy or the theory that Tyrion Lannister is actually the son of Mad King Aerys. And, then there are some that are so wild they can't possibly be true. (Although, anything is possible in the GoT world, I suppose.) Still, the following eight theories prove that some people have waayyy too much time on their hands to come up with this stuff.

The Theory: The conniving Varys switched Papa Stark out just before his execution, replacing him with a skinchanger — perhaps an injured but still-alive Syrio Forel. (Arya's dancing master was from Braavos, the home of the Faceless Men.) To be fair, in the books we see Mance Rayder executed, only to learn that Melisandre had switched him out with another wildling who she had glamored to look like Mance. So, is it so crazy to think that maybe Ned could still be alive? In my opinion: Yes. Yes, it is.

Why It's Probably Not True: Listen, y'all. Ned's dead. Period, end of story. I can understand some people who hadn't read the books being in denial between Episodes 9 and 10 of Season 1 — but once that finale came around and you saw Ser Ilyn waving around poor Ned's decapitated noggin'... Yeah, he's a goner. Those book readers who are happy that Lady Stoneheart was cut from the show tend to think Catelyn's resurrection undermines the tragedy of the Red Wedding. Can you imagine how much it would undermine the tragedy of... pretty much the whole show if it turned out that Ned was actually still alive and in hiding somewhere this whole time?

2. Varys Is A Mermaid

The Theory: Speaking of Varys, some readers are convinced that the Master of Whispers is actually a mermaid. (Or merman, to be technical.) There's actually a surprising amount of textual evidence for this one. When Arya sees Varys and Illyrio Mopatis (both described as hugely fat but surprisingly light on their feet) conspiring together in the bowels of the Red Keep, they emerge from a well. Varys is often described as "slimy," and when Tyrion threatens to throw him in the sea in Season 2, Varys responds, "You might be disappointed in the results."

Why It's Probably Not True: Sure, several scoffed-at mythical creatures have proven to be real throughout A Song Of Ice And Fire. (White Walkers, dragons, wargs, smoke monster babies.) But merpeople? I suppose the saga could end with Dany's dragons melting the Wall, flooding all of Westeros, leaving Varys the Merman to rule over the soggy kingdom. But, does that really seem like a logical conclusion?

The Theory: Dany's lover isn't what he appears. The sellsword captain is actually Theon's uncle Euron in disguise. (We know Dany is easily fooled by disguises, thanks to that whole Arstan Whitebeard/Barristan Selmy nonsense.) In A Feast For Crows, after he's elected King of the Iron Islands, Euron makes public his intention to woo Dany as his bride. Oh, and also the times when Daario is away on missions for Dany and the times that Euron shows up on Pyke happen to weirdly coincide.

Why It's Probably Not True: When one of your favorite characters is cut out of the show, of course you'll do anything to convince yourself that they still exist. But, this theory makes next to no sense. Though, good news for Euron fans: Even though he seemed like a goner after not appearing in Season 5, it appears the role is being cast for Season 6. So, consider this one not only untrue, but thoroughly debunked.

The Theory: After encountering the White Walkers beyond the Wall, Jon's uncle fled across the Narrow Sea to seek Westeros' one true hope of defeating the army of ice zombies: Daenerys Targaryen, Mother of Dragons. When Martin informed the writers of this upcoming plot twist, they recast Daario with an actor who bears a closer resemblance to the Stark family.

Why It's Probably Not True: I don't know why readers are so obsessed with Daario being anything other than a flamboyant sellsword. But, apparently pretty much everyone reeeally wants him to turn out to be another character in disguise. I suppose his blue hair, gold teeth, and multiple piercings (as described in the book) could be part of his disguise, but come on. Benjen would never have abandoned his post as First Ranger without telling anyone first.

The Theory: The woman in the red lacquered mask who gives Dany vague warnings and prophecies is in fact the Targaryen Queen herself, visiting from the future. This explains how she's able to guide Dany, and how she's able to appear in unexpected places (aboard the Balerion, inside Dany's room in Meereen).

Why It's Probably Not True: This isn't sci-fi, people. A Song Of Ice And Fire is a fantasy saga — and a fantasy saga that took an impressively long time to even introduce the concept of magic, to boot. Do you really think the grand conclusion of the saga is really going to involve time traveling or teleportation or anything that would feel more at home on the Enterprise than in Westeros? I think not.

6. Bran Is A Time-Traveler

The Theory: Speaking of time traveling, Dany isn't the only character suspected to have accomplished this rare feat. One of the most convoluted fan theories out there claims that Bran is responsible for his own paralysis. How, you ask? Bran has at least two powers that we know of: he can warg into other humans/animals, and he can use the eyes of weirwood trees to see through time. So what if he harnessed his time-hopping and his warging abilities at the same time to transport his consciousness into the body of Jaime Lannister so he could push himself out that tower window, ensuring that he would start the cycle that would lead him towards learning how to harness his powers?

Why It's Probably Not True: Whoa. My brain is crying. At least Bran has a proven ability to see through time, that at least makes this a smidge more believable than the Dany time-traveling theory. But, this is outlandish even for Game of Thrones fans, don't you think?

7. Hodor Is The God Of The White Walkers

The Theory: Hodor isn't Hodor's real name, it's just the only sound he knows how to make, so everyone started calling him that. But, did you know that there's a Norse god named Hod? And, what do you think he's the god of? That's right, WINTER. Coincidence? Not according to some theorists! These people claim that Hodor's name means he is an agent of the Great Other (the god of the White Walkers), bringing Bran north of the Wall on instructions received in his dreams. Others claim that this means Hodor is the Great Other himself, in disguise as a simpleton while carting Bran north for his nefarious purposes.

Why It's Probably Not True: Hodor. Hodor hodor hodor.

8. Roose Bolton Is A Vampire

The Theory: Okay, maybe not a "vampire" in the traditional sense of the word, but more of a "skin-stealing immortal." In the books he's described as very pale, with eyes the color of ice. He has a predilection for leeching (a charming trait that sadly didn't make it onto the show), presumably to get his dead blood circulating. And, we know his family enjoys a good flaying. If the Faceless Men can use the faces of dead people to disguise themselves, why couldn't Roose? And, how did he gain his immortality? Either through some devilish deal with the White Walkers... or perhaps because he's actually half-White Walker himself, the child of the Night's King and his icy bride.

Why It's Probably Not True: Actually, I'd be totally down with this one turning out to be true.