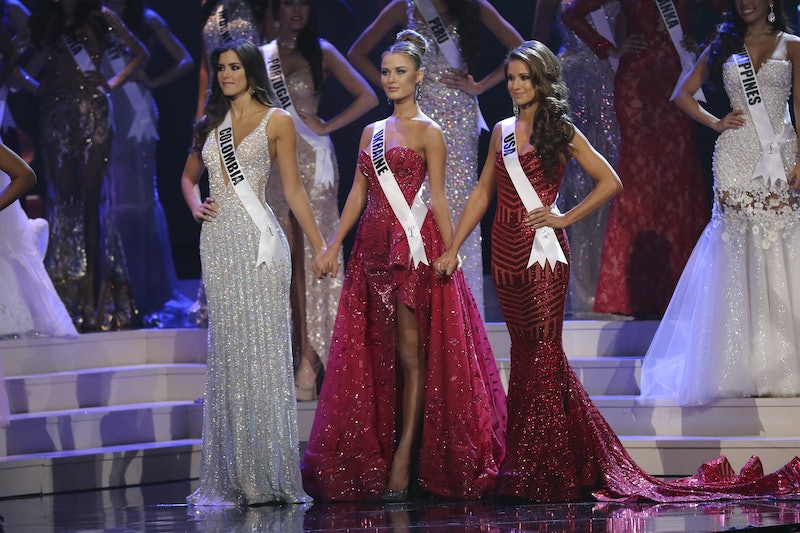 With all the drama surrounding Donald Trump, the Miss USA pageant is getting even more attention than ever before. Which would be typically chalked up as a business move of the shrewd Trump, but considering he's been kicked to the curb by Univision, NBC, Macy's, celebrity chef Jose Andres, PGA of America, ESPN, Roselyn Sanchez, NASCAR, Serta, Flo Rida, OraTV, and many others, it seems like there will be few watching (or performing, or sponsoring, or hosting) the Miss USA pageant at this point.

But even without Trump running his mouth, how many people still tune in to watch these arguably antiquated beauty parades? While it's fine to admire beautiful women, I refuse to believe that there's nothing more to these contestants than just a pretty shell. They all have thoughts, feelings, and skills that cannot be showcased just by strutting in a swimsuit or answering bizarre interview questions like, "If you could be beautiful and not so smart, or brilliant and not so beautiful, what would you be and why?" Or, "If you could be water or fire, which would you be and why?" That's why I'm calling for a change in format — we need new categories to bring Miss USA to the modern ages.

Although it's probably too last minute to implement these modifications to the pageant for 2015, there's no reason why these categories can't be added in for 2016's spectacle. Keep reading to see my picks for what clearly needs to be included in time for next year, like:

Beauty pageant contestants typically get a bad rep for being not-so-bright, but in light of Trump's recent super-racist comments (that he, amazingly, doesn't think are racist), I feel it's safe to assume they all have more sense and intelligence than him. The judges should comb through Trump's idiotic responses to reasonable questions he's been asked (the man is running for President, after all), and pose those queries to the contestants.

My guess is they will all have better ideas about how to run the country than he does. And, by this time next year we'll have a new Pres (please, please, NOT Trump) and even more golden soundbites from the Don, so you know it's gonna be good.

Come on — why isn't talent part of these pageants? If watching the mockumentary Drop Dead Gorgeous religiously as a teen taught me anything, it's that pageants are supposed to have a talent portion. Bring on the flaming batons, the saxophone solos, the over-the-top religious overtures, and the awkwardly-choreographed dance routines!

You don't get to compete in the Miss USA pageant by having your name drawn out of a hat; all of these women had to compete (and win) in local state pageants to get to this level. Clearly they must have pride in their state to be considered a representative of it, so I'd love to see just how crafty these women can get when they have to D.I.Y. some state-themed accessories. Not sure where to start? Take a look at the over-the-top national costumes of the Miss Universe contestants for inspiration.

Again, Drop Dead Gorgeous lied to me. There should be exquisitely-choreographed dance routines before the lead-in to every segment, with an elimination at the end of each dance. (Dance contest shows are still all the rage, right?) We need, nay deserve, a winner who can break it down like a dancing queen.

Everyone looks beautiful when they're done up to the nines, not a hair out of place, not a smudge of lipstick on their Vaseline-coated teeth. But what these women look like in "real life" is somewhat of a mystery. Let's take a page from Miz Tyra Bank's uber-successful show, America's Next Top Model, and give the girls a style challenge that would make Miss J proud.

One big rack of clothes and one table of accessories and shoes would be wheeled out on stage, a countdown clock would appear, and all the contestants would have 60 seconds to make it work. The woman with the most awesome outfit would automatically advance to the top five. (Also, can we make Miss J a permanent judge for all award shows going forward? K, thanks.)

Do they really want world peace? Is their dad really their biggest hero? Inquiring minds want to know, damnit, and by strapping the contestants up to a lie detector we can finally know the truth.

OK, so there's plenty of proof that lie detector tests are total bunk, are beatable, and can pick up false negatives, but come on, it's the closest we have to a truth-telling device that doesn't require some sort of James Bond villain-esque potion. As an added bonus, let's get Maury Povich to come out and read the results.

Neither the judges or the hosts ever ask the contestants why they want to be Miss USA. Is if for the honor and prestige? Are they following in their mother's and grandmother's footsteps? Is there a charity they're hoping to promote and bring more attention to? Are they truly competing for scholarships, and if so, what do they plan to major in?

Like that all-important job interview question, it's vital to know why you want the career you're fighting for. Once their on-the-spot answers are given during the first portion of the show, viewers should have the opportunity to text their vote (like on American Idol), and the woman with the best response will move ahead to the top 10.