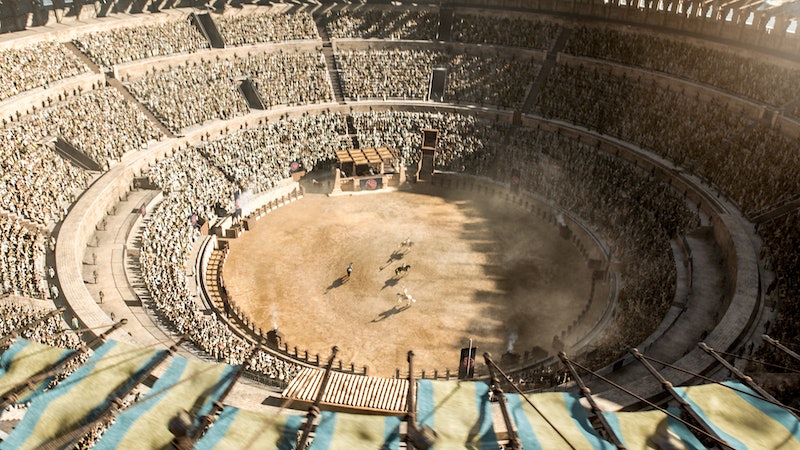 When you hear people say that Game Of Thrones is the most ambitious show in television history, that's not hyperbole. The HBO fantasy series has one of the most sprawling casts of all time: Season 5 had over two dozen actors credited as "Main Cast." It's one of the most expensive shows ever attempted, costing an average of $6 million per episode. And it shoots its myriad fictional settings on location in six different countries (Croatia, Iceland, Ireland, Malta, Morocco, and Spain) with additional studio filming done in another three (Canada, the United Kingdom, and the United States). Now, the indefatigable Thrones team is adding six new Game of Thrones filming locations to its Season 6 roster... and these new locations might actually be spoilers for what's coming next year.

All six of these new locations are in Spain, which gives us a hint about where in Westeros (or Essos) they're supposed to be. Each country on the Thrones roster stands in for a specific location in George R.R. Martin's fictional world, whether it be Croatia standing in for King's Landing or Iceland for beyond the Wall. Spain was a new addition to the roster for Season 5, and it was unique in that the three Spanish filming locations represented three distinct cities — Seville was Dorne, Córdoba was Volantis, and the bullring in Osuna was the fighting pit in Meereen.

That makes it hard to predict which cities or regions these six new filming locations will stand in for, but let's look into the fires and do our best to glimpse the future. (Hopefully we're better at it than Melisandre.)

Dany's cliffhanger in the Season 5 finale found her stranded in the Dothraki Sea after her flight on Drogon's back, where she was soon surrounded by a (hostile?) khalasar. The rugged landscape of these Spanish hills look like they could easily pass for the home turf of the savage horse lords. Otherwise, this could also potentially be an exterior location somewhere in Dorne — most of the kingdom is covered in a vast desert, after all.

This ornate castle surrounded by a lush forest is pretty much the polar opposite of those barren badlands above. Casting reports already tell us that we'll be meeting Sam's family next year — his stern father Randyll, his dim brother Dickon, and his mother and sister — and this could be the castle of Horn Hill, ancestral home of House Tarly. Horn Hill is located in the Reach, the same kingdom that houses the Tyrell stronghold Highgarden; the Reach is famously the most fertile and beautiful of the Seven Kingdoms, which supports the theory that this verdant location will be standing in for Horn Hill.

Book readers are already rumbling about the casting of a "Legendary Fighter" that could indicate that Season 6 will, like Season 5, open with a revelatory flashback — this time to the events at the Tower of Joy, during which Ned Stark battled against Rhaegar's Kingsguard to rescue his kidnapped sister Lyanna... who perished mysteriously. (And, if you believe in R+L=J, it's where Ned first met his nephew Jon Snow). The Tower of Joy is located in the Red Mountains of Dorne, and the haunting look of that solitary tower built into an imposing cliff clearly evokes the grief-stricken memory of that fateful encounter.

This fortified city certainly has the Dornish look about it. Most of Season 5's Dorne scenes took place inside the confines of Prince Doran's Water Gardens. Perhaps Season 6 will move us out of the palace into the greater city of Sunspear. Or perhaps Alcazaba will be another Dornish city entirely; perhaps Starfall, the ancestral home of House Dayne? Ser Arthur Dayne was one of the Kingsguard Ned slew at the Tower of Joy, after which he returned the knight's legendary weapon, the Sword of the Morning, to his grieving widow, which means this city could be featured in the same flashback as Zafra Castle.

Right before, he was brutally murdered by his traitorous Night's Watch brothers, Lord Commander Jon Snow sent Sam to train at the Citadel of Oldtown in order to replace the dearly departed Maester Aemon. Located in the Reach, Oldtown is one of the oldest (obviously) and largest cities in Westeros, and it's easy to imagine this sprawling Catalonian city standing in for it. The famous Collegiate Church of Saint Feliu, seen towering over the Onyar River on the left-hand side of the above picture, could certainly pass as the famed Citadel of the Maesters.

Martin has yet to take his readers to the ancestral Lannister home of Casterly Rock, but if this location is any indication, we might be headed there next season. The Rock is described as situated on a cliff overlooking the harbor of Lannisport and the waters of the Sunset Sea. The picturesque Peñiscola, a fortified seaport overlooking the Mediterranean, would certainly make a striking home for the proud Lannister family.