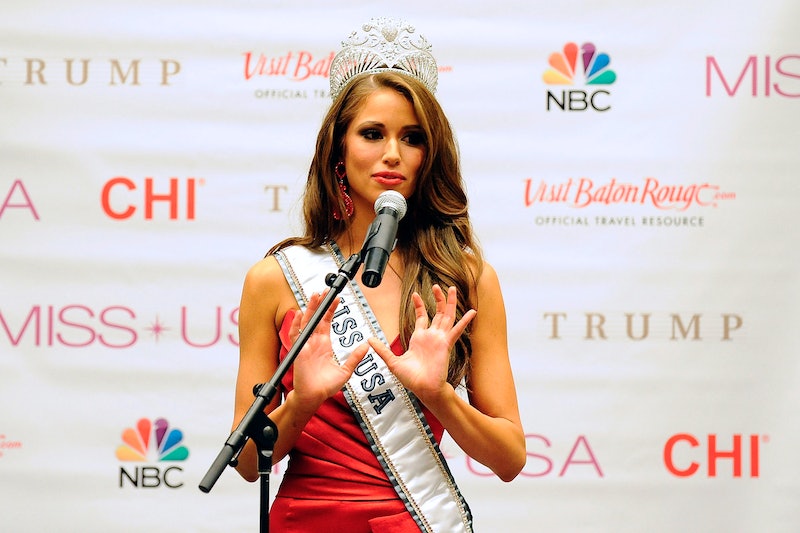 After Donald Trump's latest string of highly-publicized snafus, the future of the Miss USA pageant is up in the air, and maybe that's not such a bad thing. The whole practice feels dated, from parading women in bikinis back and forth in front of fully clothed, mostly male judges, to grilling them about wire taps and Guantanamo prisons. It's not a far cry from the old points system from when the pageant began in the 1950's — you know, five points for the construction of the head, three points for the torso— but with the addition of International Politics and warfare.

Until lately, Donald Trump has mostly gotten away with foot-in-mouth syndrome simply by pure arrogance (and sacks and sacks of money). But the contestants in Miss USA (and women in general) are expected to be gracious, levelheaded and above all, neutral when making statements and sharing opinions on the show.

The questions, and their not-always-graceful answers, have spawned a whole meme-worthy crop of #fails that the contestant, who is put on the spot and has 20 seconds to answer, will likely never live down. A search for Miss USA videos on YouTube brings up just as many "Miss USA Fails" and "Miss USA has a painful response" results as other related content.

Here are examples of some of the questions the contestants were asked in last year's pageant:

"Government tracking of phone records has been in the news lately. Is this an invasion of privacy or necessary to keep our country safe."

"Due to the growing problem of binge drinking on college campuses, a growing number of college presidents are encouraging law makers to lower the drinking age. Do you agree that this will promote responsible drinking?"

"Should people who leak classified documents in the name of public information be charged with treason?"

What's worse? The downright smug looks of the judges as they ask questions designed to stump the contestants while simultaneously making themselves look incredibly smart and politically aware, like when when repeat offender Ian Ziering (best known for his parts in 90210, Sharknado, and of course, his debut as a Chippendales dancer) asked Miss Louisiana what she thought about the release of five US detainees from Guantanamo in exchange for "Bowe" Bergdahl.

Here's the thing: At our best, young women are dynamic, intelligent and caring, among other things. Our interests vary widely, from public policy to human rights to sports to how to keep our nail polish from chipping, and that should be celebrated, not scrutinized. It's wrong to assume that a woman who cares about beauty doesn't care about NATO trade agreements, or that a women who is vocal about equal pay for women shouldn't spend an afternoon perfecting her makeup contouring skills. That said, it's damaging to judge women on their ability to be perfect at all of those things at once.

That's why I find most of the questions from the Miss USA Pageant to be truly baffling. Why should a woman have to balance on five-inch stiletto heels, in a sequin ball gown (and I can only imagine the insane amount of shapewear under there), put on a megawatt smile, and answer questions about ISIS?

Here's what I think the judges should be asking instead:

What do you do outside of the contest?

I'd love for the contestants to start getting real, and showing viewers, some of whom may be young girls, that after the fake eyelashes come off, these women have real plans, like finishing college, curing cancer, or running for POTUS.

What worries you most about the future for young women in the USA?

Here's a chance not to stump the contestants, but hear, from a young woman's perspective, what everyday cultural and political issues are in our hands, like campus rape, #blacklivesmatter, access to birth control, paying off student loans, the sort of thing that affects young people on a daily basis (I.E. not wiretaps).

What was your most recent experience with sexism (besides tonight, that is)?

I'm sure there's plenty to fill those 20 seconds pretty easily!

What are some of the things you can't do in that gown?

"Play soccer, eat food, or focus on ISIS because I am too busy focusing on breathing."

Because after all, there's more to life than being a beauty queen.