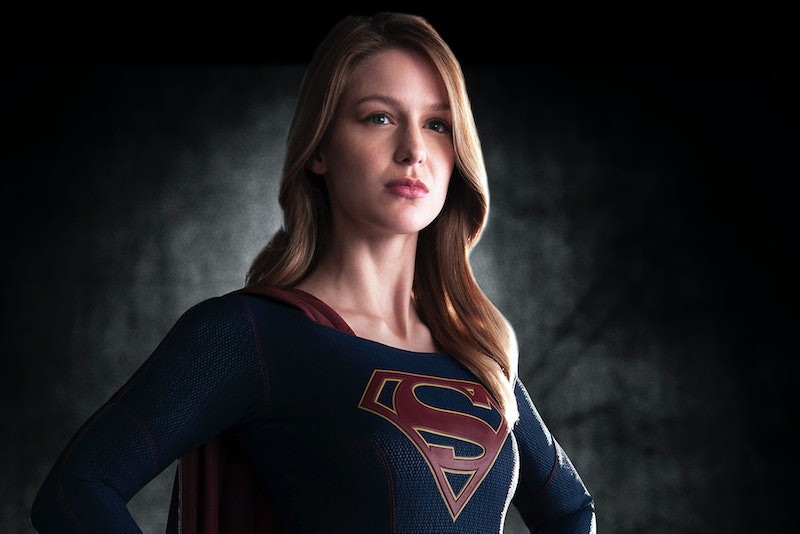 After the tragedy of being denied a Black Widow Avengers spinoff movie, fans have something to celebrate in the female-centric superhero genre. On Wednesday, the upcoming CBS drama Supergirl released a teaser on Twitter, and it looks like it going to be pretty kickass. The show stars Melissa Benoist as the title character, who you may remember as the awkward, poverty-stricken Marley Rose on Glee. She seems like an excellent choice for the young, powerful, and equally awkward Kara Kent, Clark Kent's cousin from Krypton.

The show looks like a promising upgrade over Supergirl's unfortunate 1986 film starring Faye Dunaway, and it's high time the character got her due. Just in case you were worried that the show is actually going to end up being all about Superman, executive producer Ali Adler assured Entertainment Weekly that old Clark Kent won't have much to do with this show. "Our prototype is the way the President is seen on Veep. It’s certainly [inspired by] so much of what Julia-Louis Dreyfus’ character goes through. Ultimately, this is a show about Supergirl, and we really want to see it through her lens." A-woman to that!

Here's the moments from the teaser that make Supergirl look like TV's next great superhero show.

1. It's Pretty Fantastic To See A Woman In This Iconic Pose

Like Christopher Reeve and Dean Cain before her, Benoist pulls this look off.

2. It May Be A CBS Drama, But It Looks Like There Will Be A Ton Of Action

Any superhero who takes the time to pose in front of the massive explosion they just instigated gets an automatic gold star in my book.

4. For Once, The Superperson Actually Does Look Kinda Different As Their Alter-Ego

Here she is as Kara Kent...

...and here she is as Supergirl. She even took the time to change her part and feather her hair!

5. Calista Flockhart Is In It

That is always a good thing. If you've never watched Ally McBeal, then I don't even know what you're doing with your life.

6. She's Got All The Strengths of Superman...

Yeah, that's a bullet bouncing off of her chest. Ain't nothing but a thang...

The invincibility of superheroes with unlimited strength and power can get a little boring if their alter-egos aren't grounded in some sort of reality. Like Clark Kent, Kara comes across as nerdy and shocked by her own powers, and the dynamic looks interesting.

Take a look at the teaser here.