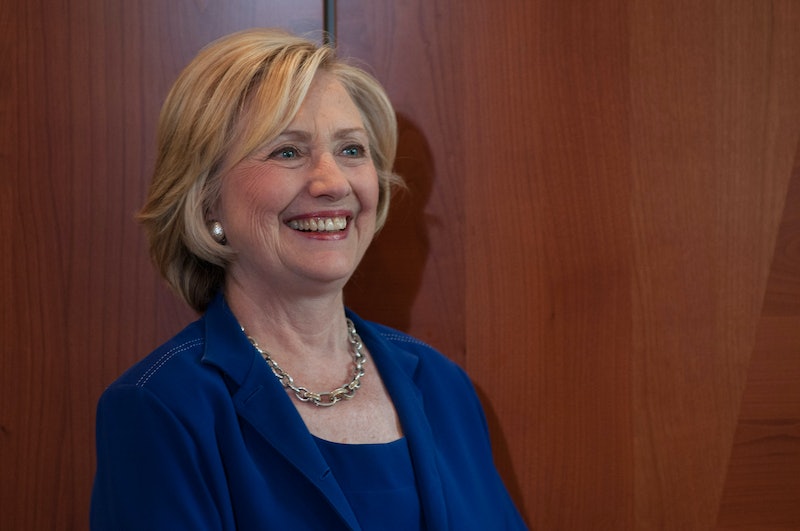 Just moments after South Carolina lawmakers voted to remove the Confederate flag from statehouse grounds, 2016 Presidential candidate Hillary Clinton applauded the action in a strongly-worded public statement issued from her campaign. Calling the flag a "symbol of this nation's racist past," the Democratic frontrunner said that the change was an important step toward equality. Clinton's statement on Thursday echoed other similar statements she has made in recent weeks on racial division. It was also one of very few from a 2016 Presidential candidate in response to the flag's removal.

Clinton's statement comes on the heels of a similar message she delivered during a campaign stop in Missouri, where she urged lawmakers to remove the flag wherever it stood. Days after the shooting of nine African-American churchgoers in Charleston, South Carolina, Clinton issued her strongest message so far about America's complicated racial history. Speaking at an African-American church just outside of Ferguson — where protests following the shooting death of unarmed teen Michael Brown at the hands of a police officer drew national attention — Clinton speculated that removing the flag was "just the beginning of what we have to do" to address racism. The New York Times reported that Clinton followed those words by outlining alarming statistics about economic disparities between black and white communities, including figures showing that schools today are more segregated than they were in the 1960s.

Despite our best efforts and our highest hopes, America's long struggle with race is far from finished. We can't hide from hard truths about race and justice. We have to name them and own them and change them.

In a speech to the U.S. Conference of Mayors just after her Missouri remarks, Clinton expanded her earlier position by outlining a slate of economic and systemic initiatives to correct racial imbalances and discrimination, including changes to minimum wage laws, voting rights protections, stronger gun control, and reform of law enforcement.

In her press statement on Thursday, Clinton repeated her reference to "unfinished business" on racial injustice.

With her statement, Clinton distinguished herself yet again as one of the select Presidential candidates willing to address the racial divide head-on. As of Thursday afternoon, very few of the 2016 candidates had spoken publicly about the issue. Which is odd, considering the growing Republican awareness of public sentiment that sees the flag as a symbol of division and hatred. Still, out of the nearly 20 other declared 2016 candidates, so far only Jim Webb and Jeb Bush have spoken publicly about the Confederate flag's removal.

Jim Webb: It's Long Been Due To Come Down

In his first television interview since announcing his run for president in 2016, Republican candidate Jim Webb lauded the decision by South Carolina lawmakers. Speaking to hosts of CBS This Morning, Webb called the symbol "a battle flag" that "assumed a lot of unfortunate racist and divisionist overtones during the Civil Rights era." However, Webb also doubled-down on his earlier call for protecting the "complex history" associated with the Civil War.

Jeb Bush: It's A Racist Symbol

Republican candidate Jeb Bush didn't issue a public statement on Thursday, but he did visit the South Carolina on Monday, where he spoke to employees at a pharmaceutical plant near the state capitol. According to CNN, Bush responded to a question from an African-American worker by calling the flag a racist symbol and applauding South Carolina lawmakers for pushing for its removal. He also pointed out that as Florida's governor, he removed the Confederate flag from the capitol grounds and put it "where they should be": in the Museum of Florida History.