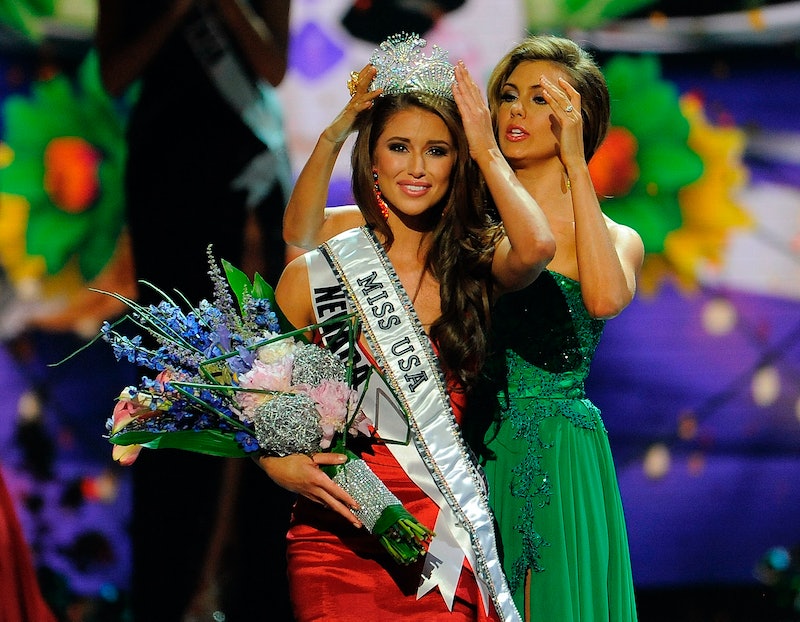 When people think of beauty pageants, images of women parading around in swimsuits and wearing sparkly gowns (all while being judged by a panel) may come to mind. Sounds like a feminist's worst nightmare, right? When you think about things from a different perspective, though, could a beauty pageant actually be a feminist pursuit? To me, feminism is a lot of things, but it's definitely not judging a woman for what she wants to do. And that's the thing — if someone enjoys beauty pageants, who am I to say that they're a bad feminist for participating?

While it's true that every year includes a major blooper from one of the contestants (Miss Teen South Carolina, anyone?), it's also true that plenty of pageant contestants have proven themselves time and again as strong, educated, and independent women. I mean, Miss USA 1998 Katherine Shindle went on to be a Broadway star and major AIDS activist. Miss USA 2003 Erika Harold graduated from Harvard Law and ran for Congress. These ladies are many things, but they're definitely not stereotypical pageant bimbos who need validation from men or anyone else.

1. They're not doing it for men

Sorry, boys. These ladies aren't getting hair extensions and taping themselves into bikinis for you. As Miss Virginia USA's 'Miss Congeniality' award winner put it, "...I do not compete in pageants for the attention of men. I am proud of my body, but it does not define me or validate my worth. Yes, there are some women who go to unhealthy extremes to shed pounds. But what about those of us who do make a commitment to eating healthy and working out? It's hard being a woman today when society bashes you for being unhealthy and overweight, while simultaneously bashing you for striving to be healthy and fit." Couldn't have said it better myself!

2. Pageants can be a launchpad

It's hard to get ahead in today's world, even with a college education and stellar internships. Some fields are more difficult than others to break into, especially TV, media, and entertainment. Just like Katherine Shindle and Erika Harold, many women view pageants as a way to get their foot in the door of a notoriously competitive industry. If a pageant can get a woman noticed, is that so bad? Everyone knows that Halle Berry and Eva Longoria got their starts in beauty pageants, but I bet you didn't know that Diane Sawyer was Kentucky Junior Miss in 1963! Gretchen Carlson of CBS was Miss America 1989 (and that gal even went to Stanford and Oxford). I'm certainly not going to disparage any woman for getting ahead in her career.

3. Pageant winners can be successful spokeswomen about important issues

Like it or not, the winner of any major pageant all of the sudden has a voice in the media. Sometimes, it's to say...well, stupid things. But other times, it's to draw attention to issues that should be addressed in the world. In the 2013 Miss America pageant, Miss Arizona had been diagnosed with Tourette's and wanted to raise awareness. That same year, Miss Iowa, who was born without her left forearm, also competed. Former Miss Pennsylvania USA Valerie Gatto spoke out about being a child of rape in a strong and inspirational way.

4. Pageants are getting more inclusive

I'm not going to pretend that pageants are the most progressive thing in the world. We all know they're not. They have a long way to go. But can we applaud the diversity that does exist, and it's getting better? Seven Latina women have been crowned winners, along with six black women, starting in 1990 with Carole Gist. (Check out this year's amazing Latina candidates here.) In 2010, the first Arab-American was crowned the winner: Miss Michigan Rima Fakih. The winner of Miss USA goes on to Miss Universe, where the cultural differences of each woman are celebrated. Sounds like a cause to celebrate.

5. Not all feminists look alike

You don't get to decide what a feminist looks like or acts like, and neither do I. But can we all agree that a feminist can wear mascara and like sequins just as easily and as she can like politics and equality? Because guess what...she can do whatever she wants.

More like this
Sandra Bullock, Girlboss Extraordinaire
By Matt Harkins & Viviana Olen
How Sunnies Face Is Championing Filipino Beauty
By Kristin Corpuz
How This Founder Manifested Ariana Grande As A Brand Ambassador
By Dominique Norman
Target Dropped *Two* New Fashion Collabs With Queer-Owned Brands
By Dominique Norman
Get Even More From Bustle — Sign Up For The Newsletter