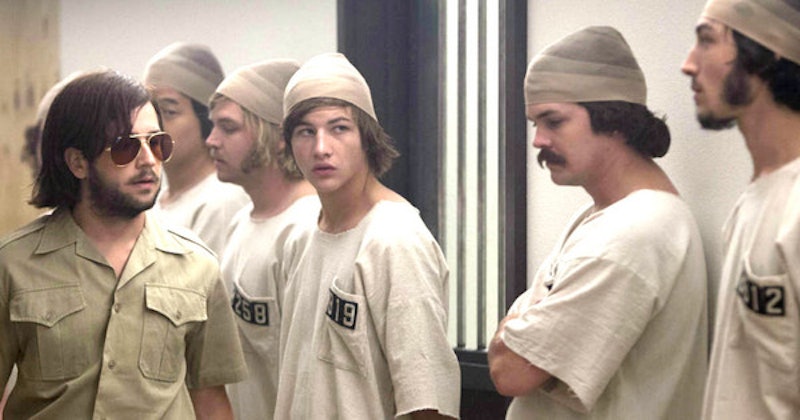 The new movie The Stanford Prison Experiment, which will be released for a limited run in theaters July 17, looks creepily good. The film tells the story of a psychological experiment in which two dozen young men are randomly assigned to roleplay either prisoners or guards in a mock prison setup. It's so unsettling as to seem real — so is The Stanford Prison Experiment is based on a true story? As any psychology major can tell you, oh, yes, it is.

The film, which features names such as Billy Crudup and Ezra Miller and won multiple awards at the 2015 Sundance Film Festival, is said to be very accurate in representing the events of the original experiment. This can be attributed in part to the fact that experiment researcher Dr. Philip Zimbardo was a consultant on the movie. If you've ever taken a Psych 101 class, you may already be somewhat familiar with Zimbardo and his controversial plan. However, there are a lot of details about the study that aren't common knowledge. Here are a few things you should know about the real Stanford Prison Experiment:

1. The Roles Were Enforced Early On

Although the roles of prisoners and guards were randomly assigned by a coin flip, once subjects had been assigned, they were treated in such a way to reinforce their roles. The goal was to recreate both the physical and psychological feeling of a prison, and so steps were taken to create mindsets in the subjects that were consisted with the roles to which they had been assigned. For example, the "prisoners" were actually picked up from their homes (without prior notification) by police officers, then were strip-searched and forced to don uniforms of loose dresses and caps made from stockings. These measures were taken to induce the feelings of humiliation and emasculation that prisoners have reported experiencing. In contrast, the guards were given costume-like uniforms with nightsticks, whistles, and reflective sunglasses. Although they were not given constant instructions, they were given a basic message: do what you need to keep things under control.

2. Not All Of The Guards Acted The Same Way

Although the basic gist of the story is that "the guards went out of control," it was in fact only a third of the men playing guards who "became tyrannical" in their behavior towards the prisoners. Other guards were described as being "tough but fair," while still others were friendly towards the prisoners and did small favors for them. Zimbardo has noted, however, that none of the "good" guards did anything to stop the experiment or intervene when other guards were mistreating the prisoners. This failure to act on the part of the "good" guards could be seen as even more harmful than the outwardly aggressive behavior, as it helped both perpetuate the prison environment and keep the prisoners docile.

3. The Experiment Couldn't Be Done Today

At the time it was conducted, the experiment met all the criteria to satisfy the American Psychological Association's ethical standards. The study had also been approved by Stanford's Human Subjects Research Committee. However, after the dramatic results of the experiment, the APA's criteria were modified to no longer allow for human-subject simulations like those of the Stanford Prison Experiment. Zimbardo has acknowledged, "No behavioral research that puts people in that kind of setting can ever be done again in America."

4. It's Been The Subject Of Many Movies

In 2001 a German film called Das Experiment was released and claimed to be inspired by the Stanford Prison Experiment. However, the movie portrayed many events — particularly acts of violence — which never occurred during the actual experiment. Dr. Zimbardo said the movie was "irresponsible" for its unrealistic and negative portrayal of psychological research. An American version of The Experiment, however, was made in 2010, starring Adrien Brody (above) which was similarly fictionalized. For viewers seeking more information about the real-life events, though, there is a documentary about the study called Quiet Rage which utilizes real video footage from the experiment as well as interviews with the participants and archival photos.

The Stanford Prison Experiment is an incredibly interesting event in the history of psychological research and raises many questions on the topics of individuality, ethics, and more. I look forward to seeing how the new film brings the study and its findings to life.

More like this
Michael & Kathleen Peterson’s House From ‘The Staircase’ Has New Owners
By Kadin Burnett and Kayla Blanton
Where Is Dr. Cline Now?
By Morgan Leigh Davies
9 Honestly Unbelievable Revelations From The WAGatha Christie Trial
By Frances Stewart
UK Viewers Will Have To Wait To See Jessica Biel’s Killer Housewife Series
By Rachel Mantock
Get Even More From Bustle — Sign Up For The Newsletter