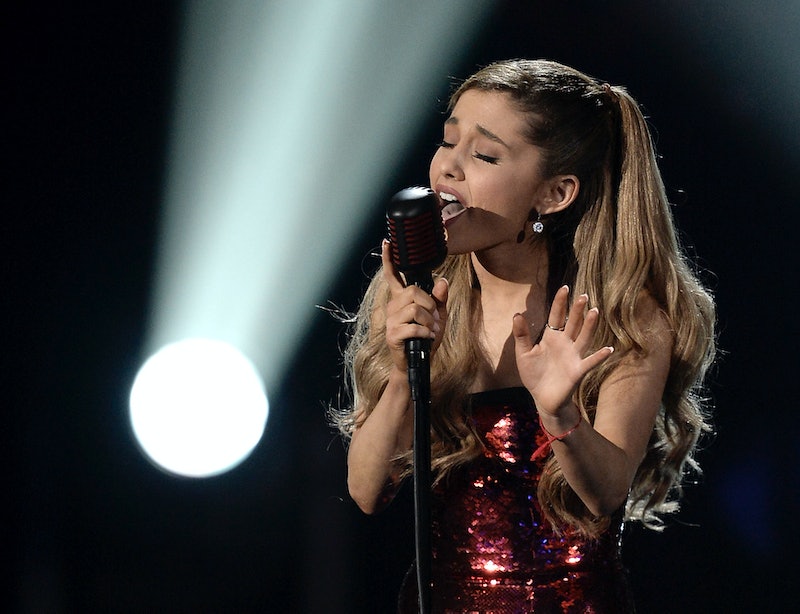 Hey. I loved the performances during the American Music Awards. I laughed until I wept during Miley Cyrus's cat… thing. Lady Gaga and R. Kelly are my new favorite duo. I want them to perform "Do What U Want" at all of the awards shows until the end of time. As soon as Luke Bryan started gyrating around while singing about cornfields (corn holes?), I ran and hid in the other room until it was over. But the understated star of the night? Ariana Grande. I've been pushing my pro-Ariana agenda on everyone and anyone who will listen lately, so I felt oh so validated when Grande CRUSHED IT during the AMAs.

Grande started out with an a cappella clip of "The Way," and then segued into "Tattooed Heart." She belted like a maniac. I cheered like a maniac. A maniac, maaaaniac! And guess who gave her a standing ovation? A maniac named Kristie Rohwedder. And, right, two superstars named LADY GAGA AND CIARA. AND THEN, Kelly Clarkson gave her a shout out (eesh. A "shout out?" Where am I? TRL?). The ladies of pop know a good thing when they see it.

AND THEN!!! As if her performance wasn't enough, Grande won New Artist of the Year. YES. Grande is killing it. Grande will not be denied. Grande is a demi-diva. Grande will take over the pop world one day. Just give in. Become a Grande fan already. Get on the bandwagon. To help you out, here are some details about Ariana Grande:

She was on Victorious

The Nickelodeon sitcom starred Victoria Justice, but Grande stood out as the airy-voiced, hilarious, ditzy friend.

The diminutive singer/actress may play a high schooler on television, but she's 20 years old.

She's Dating a Guy from The Wanted

Grande and Nathan Sykes have been an item for a few months. They did a duet on her album. Such CUTIES.

Her Voice Is the Deal

A four octave range, whistle notes, melismas, et cetera. Saying "Ariana Grande has an impressive voice" is like saying "Cheddar Bay Biscuits are delicious." It's the understatement of the year.

I've yet to grow out of watching Nickelodeon shows. They're like cartoons but with real people. Live-action cartoons! I am happy to report that the recent crop of shows is totally enjoyable. My current favorite is Sam & Cat, an iCarly/Victorious spin-off. Grande is one of the stars. The premise: Two high schoolers live by themselves in a beautiful Los Angeles apartment and run a babysitting service. Shenanigans ensue. Oh, there's a restaurant with an all-robot waitstaff. SO BONKERS.

Her debut album has earned heaps of praise because, duh, it's great.

In an interview with Complex magazine, Grande revealed that she's had close encounters with A DEMON KIND. No, she didn't get intimate with a ghost like Ke$ha did, but still. She was haunted by demons and lived to tell the tale. I wish every pop star told ghost stories.

McCurdy and Grande are friends in real life. Who is McCurdy? Grande's Sam & Cat costar/AMAs date. When Grande's ex-boyfriend Jai Brooks tweeted some not-so-nice things about Grande, McCurdy sent her a very sweet text. And their support of one another isn't limited to breakups and award show dates: When McCurdy lost her mother to cancer back in September, Grande was there for her. I love their real friendship!

Grande is a vegan, has spoken out against Sea World, and used her Twitter as a "save the elephants" platform. Grande is a friend to all creatures!

Her cover of "Last Christmas" Is the only song you need this holiday season: