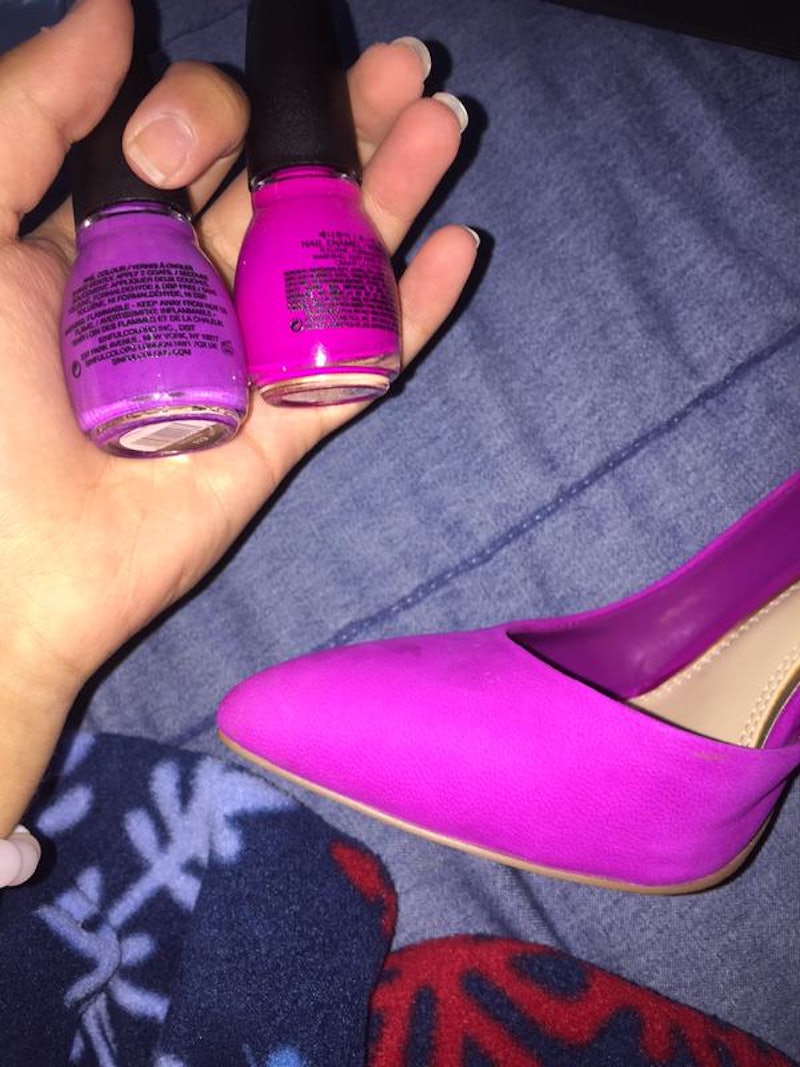 Guys, the Internet is breaking again — but this time, it's over a shoe. A pinkish, purplish shoe, to be exact, and two shades of nail polish. Which matches the shoe better: The purple nail polish, or the pink? No one knows and everyone is incredibly upset about it. But I like sitting in my ivory tower (but is it an ivory and gold tower, or blue and black?) and watching people fuss about nonsense, so here are five optical illusions like the shoe to really get your knickers in a twist.

Surely you remember the infamous dress — the white and gold one (do not even start with me. It is blatantly white and gold) that people inexplicably thought looked blue and black due to the brain and how it percieves light? Yeah, well, The Shoe is the new Dress, and it's stressing everybody out.

The way that optical illusions like the Dress and Shoe work, according to a TED talk by Nathan Jacobs, is by playing with light and the way our brains piece together information from the three-dimensional world around us. Basically, when you're looking at an optical illusion, light hits your eye and gets translated by the brain into a certain set of images. But, those images that mind conjures up don't always accurately mirror the reality of the situation. Hence, the "illusion" portion to the name "optical illusion."

People have been flummoxed by optical illusions since the dawn of time, so it's perhaps unsurprising that yet another one has whipped the Internet up into a frenzy. While we're on the subject, here are some awesome illustions to really make you want to commit ungodly sins:

Hold your finger over the center line in that image. What first appears to be two different shades of grey actually is the same color. The gist of why you see two different colors is because your brain is reacting to what you're used to seeing, so it assumes one side is brighter than the other — when they're in fact the same.

There's no way the yellow lines are actually the same length, right? But they are. Seriously, measure it with your fingers: They're exactly the same length. This one is a depth perception thing.

Don't freak out, but the orange dots are the same size. I know, I know. Shh — it's going to be OK. I promise.

4. Is This an Old Woman or a Young Woman?

Asking for a friend. No, but seriously — which do you see? My mind is exploding.

Just wait until you see the ghostly grey blobs at the crossroads between each square. Freaky.