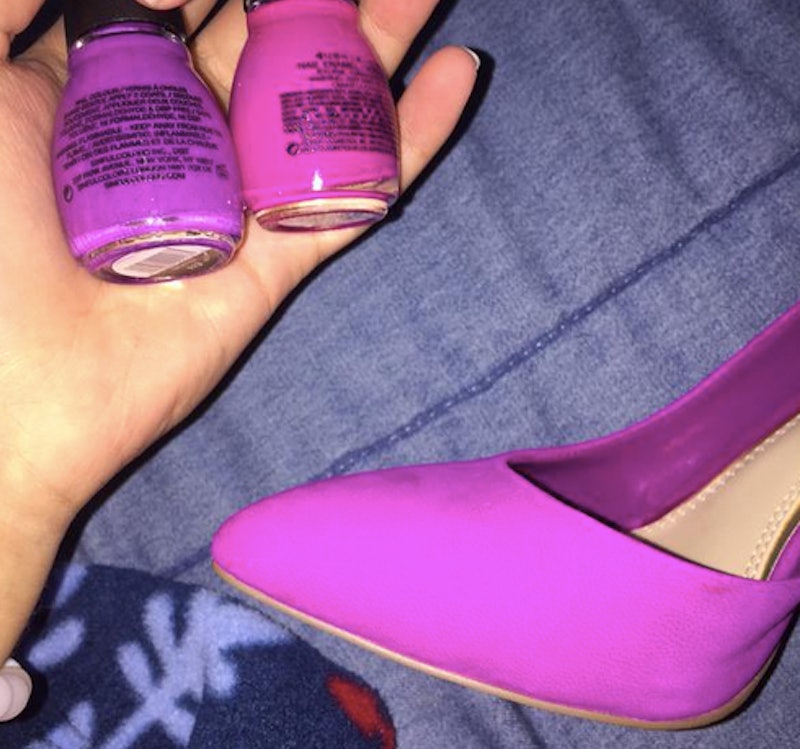 Well, internet, I hope you're damn proud of yourselves right now, because now we are all debating which color nail polish matches The Shoe mere months after the carnage of the blue and black dress scandal. What's The Shoe, you ask? Brace yourself, you sweet, innocent sunflower child: A tweet of two purple nail polishes next to a purple shoe has gone viral, which begging the question: Why do your eyes see different colors on the purple shoe? My quick and dirty answer is to blame the same group I blame for all weirdness on the internet — cats (aka our future overlords). But actually, there's some real science behind why you're seeing that damn shoe as different colors, so stick around if you wanna get learnt.

See, this purple shoe is, in its own way, far more nefarious than The Dress ever was. At least with The Dress, you tended to see it one way and then saw it that way for the rest of the whole shebang. Very few of us were dressvergent and saw it as white-and-gold AND black-and-blue. Sides were chosen. Lines were drawn. There was order to the chaos.

Not this time. This time, anything goes—you'll see it one way and then see it the other in two seconds flat. If you haven't seen this monstrosity, then prepare yourself right now, because in the words of Bruno Mars, it's about to funk you up:

See?? Even those of us who are reasonably confident about which nail polish matches the shoe will return to our computers mere seconds later and see it as a different color. I know I have. But there's a reason why we're doing that, according to Nina Frazier Hansen, the creative director of Breaking Media.

"It's a well-known optical illusion," Nina explained to Bustle. "Our brains interpret the shadows we see (in this case caused by the camera flash) and depending on whether our brains focus on the highlight or the shadow, it determines which color they perceive the "true" color to be. It also explains how people can switch back and forth, sometimes seeing one color as the match, then the other."

To further explain the phenomenon, she referred us to this handy video, particularly the color explanation at the 8 minute mark:

Other factors that might play into the way we see the dress involve the time of day, age, or even just the light of our computer. Pptometrist Thomas Stokkermans spoke with ABC News shortly after The Dress wrecked all of our lives, explaining:

"Our brain basically biases certain colors depending on what time of day it is, what the surrounding light conditions are...The brain is very good at adjusting and calibrating so you perceive light conditions as constant even though they vary widely."

Stokkermans, the head of the optometry division at UH Case Medical Center in Cleveland, Ohio, goes on to explain that the red hues in objects seem more prominent at dusk, whereas bluer ones seem more prominent in the day. Something as simple as the time of day might contribute to what kind of color you perceive as being "closer" to the shoe. I'd argue that the one on the right is redder than the one on the left, and also just happens to be the one that is winning out on the polls right now — a poll that most of us are taking later in the day, which would explain our bias toward it.

Another factor in the way we perceive The Shoe might just be as arbitrary as age. As we age, colors are less stark and seem more washed out, making it even more difficult for our brains to register which shade matches The Shoe. The older you are, the more of a disadvantage you're at in this internet game.

But more likely, our confusion has a lot to do with the way the light is reflected on our computer screens. Try dimming and lighting up your desktop, if you're able. Did the colors seem like they shifted? That's probably because a lot of this has to do with light, and how our eyes are perceiving it. Don't panic, everyone. There isn't just one reasonable explanation here — as you can see, there are plenty. The only thing we know for sure? Is that none of us are going to be wearing purple nail polish for the next 600 years. (GOOD RIDDANCE.)

More like this
Meghan Markle’s Favourite Skincare Brand Has Finally Landed In The UK
By Tomi Otekunrin
How To Master Baby Braids, According To TikTok
By Tomi Otekunrin
What Is “Jello Skin”? The Latest Viral Trend To Know About
By Tomi Otekunrin
'The Circle' Season 4 Star Yu Ling Wu Is Already A Beauty Icon
By Erin Stovall
Get Even More From Bustle — Sign Up For The Newsletter