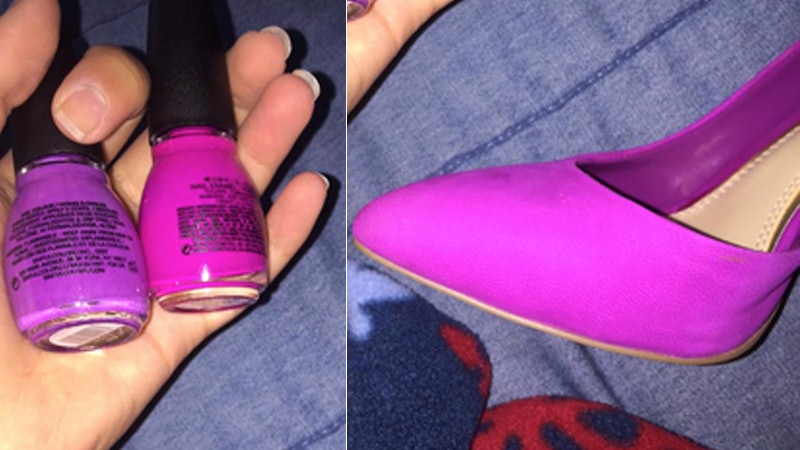 "I never thought it was ever going to become this big. I just wanted one person's opinion, and I got thousands. It's incredible," Ava Munro, the originator of #TheShoes, tells me over email. Munro is a 14-year-old from Massachusetts who now has 8,438 Twitter followers thanks to the photo of shoes and nail polish that she posted on Thursday. I’d only just gotten “The Dress” out of my mind when this next mind-numbing optical illusion hit the Internet, courtesy of Munro's Twitter.

#TheShoes is the next “The Dress,” and while I still feel it's too soon for another Internet sensation of this kind, I do see why people are obsessing over this. But it does have me wondering — is this just an attempt to become Internet famous or is this a real dilemma? According to Munro, it's definitely legit. She didn't do this to gain attention. She just wanted advice.

So, as I'm sure you know by now, the photo depicts a pair of fuchsia shoes next to pink and purple nail polishes (unless my eyes are deceiving me), with the caption, “Which color matches the shoe the best?” It's tricky to tell which color matches best because the colors are so similar and the shoe seems to vacillate between being pink and purple depending on the light. I've tried everything — blinking, squinting — and I'm not any closer to figuring this out.

And apparently, neither is Munro. While I understand why some may question the validity of this "The Dress" redux, I'm here to tell you, this is the genuine thing here, folks.

Take a look for yourself. Can you decide what matches?

You can't right? That's a huge part of the reason why this is a real problem rather than an attempt at gaining Internet fame. Here are all of the reasons why #TheShoes isn't a hoax.

1. The Colors Are Super Similar

Trippy, huh? I can tell a difference between the colors of the polishes, but then when I compare them to the shoe, I kind of see both as an exact match. I can't pick just one! Is there any way she can wear both polishes? Even Munro can't decide which color matches. "I guess you could say they both kinda do," she says. And that's exactly the problem!

2. The Publicity This Has Gotten Is Truly Shocking

Munro was just as shocked as the rest of the Web when this went viral, stating that she posted the photo because she was seeking an opinion on which color went best with the shoes. She plans to wear the shoes (and the winning polish) to "the 15-40 Connection Gala to be held this Sunday at St.Johns High School in Shrewsbury, Massachusetts!" Fifteen-Forty Connection is an organization that focuses on "empowering teens and young adults with knowledge that could help them detect cancer at earlier stages," according to the website. The gala Munro will attend, wearing a white lace dress to accompany her popular shoes and polish combo, is a silent auction.

3. These Colors Have The Same Name

Perhaps the craziest part of all of this is that these polishes are supposedly the same color. But, they're clearly not, right? Both polishes are called "Dream On" and are from the same brand, Sinful Colors. Munro was unaware that they were labelled with the same name until after she came home and tried to decide which polish was the same shade as her fuchsia pumps. Talk about proof that this is all a coincidence!

This is an actual trick of the eye rather than an attempt to go viral. But, if going viral was the goal — it worked. And unfortunately, I can't help Munro pick which one matches better because...

More like this
What Is “Jello Skin”? The Latest Viral Trend To Know About
By Tomi Otekunrin
Kris Jenner’s Advice For Kim Kardashian Is Going Viral On TikTok
By Courtney Young
The Viral TikTok “30,000” Sound Fits Nearly Every Scenario
By Courtney Young
5 Easy (& Wearable) Red Eyeliner Looks To Try
By Olivia Rose Ferreiro
Get Even More From Bustle — Sign Up For The Newsletter