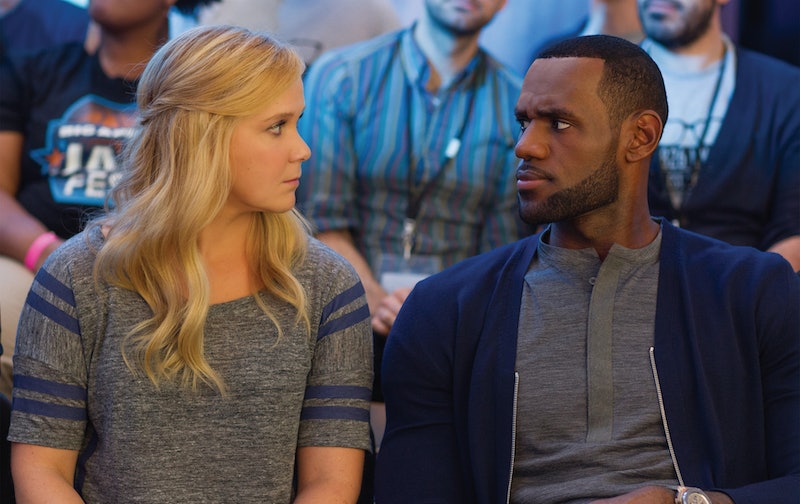 Amy Schumer has become the almighty entity of comedy and it seems that her highly anticipated film, Trainwreck will cement her into the Hollywood history books as a true movie star. The movie is written by and stars Schumer as Amy (appropriately), a woman who doesn't believe in the concept of monogamy until she finally meets a guy that makes her second guess her beliefs. The love interest is played by Bill Hader (a.k.a. Stefon from Saturday Night Live) who is a sports doctor and is best friends with LeBron James who is, in fact, played by himself (it would probably be difficult to cast someone else in that role). But out of all basketball stars, how did LeBron James get cast in Trainwreck? And, perhaps more pressingly: why is LeBron James in Trainwreck ? The answer to both is pretty simple: he was the only basketball player Schumer had ever heard of.

In an interview with ESPN in June, Schumer jokingly admitted her lack of knowledge of the sports world. She wrote James, one of the only players she could name, into the movie without knowing if he'd actually be interested, and said that if he didn't accept the role, she didn't know what she would have done. Luckily, when director Judd Apatow and Hader pitched the movie to James, he gladly accepted — but according to ETOnline, the athlete didn't think he would actually have a huge part in the movie. He thought he was just going to play himself in a few scenes, but that wasn't the case. Not only does he have a big supporting part as Hader's best friend, he is somewhat of a "love doctor." When he found this out, James jokingly said, "Oh, so that means I'm going to have lines? Like more than one per scene?"

Of course, the star player from the Cleveland Cavaliers isn't the first basketball player to take to the big screen. Many of you might remember that Shaq and Michael Jordan both had movie careers in the late '90s— or something resembling movie careers, at least. Shaq had a part in a 1994 basketball movie called Blue Chips and received decent reviews, but it is his starring role in the 1996 children's movie Kazaam that more people might remember, if not re-watch on the regular (it was a total flop). Michael Jordan, on the other hand, stuck with what he knew in 1996's Space Jam. The animated/live action hybrid was enjoyed by children because of its inclusion of Looney Tunes characters, but was little more than an opportunity to see MJ play basketball on the big screen. Perhaps it was a good thing that those talks of a Space Jam 2 starring LeBron were just rumors, because no one can replace Jordan.

Like Shaq and Jordan before him, James easily could've just made a silly children's movie if he'd wanted to dive into acting. Instead, however, he has taken another route when it comes to his movie career — a much more thoughtful one. Like Shaq and MJ, he has his commercial endorsements, but he has decided to spin his talent into more substantial projects like Trainwreck. In addition, instead of picking up a movie where he is a top-billed actor, he's chosen supporting parts, proving that he's truly interested in furthering his talent, not just getting his face on a poster. For instance, he was one of the subjects in the documentary More Than A Game, which followed him and four of his teammates through their high school basketball careers in Ohio.

Recently, he appeared in Ballers, an HBO comedy series starring Dwayne "The Rock" Johnson. He has also done his fair share of comedy on Saturday Night Live which helped him hone his chops.

Then, of course, there's his supporting role in Trainwreck, which is garnering great reviews. The next big project for him? Fantasy Basketball Camp, another comedy about a group of five guys who attend a "LeBron James Adult Basketball Camp." Unlike his other projects, he'll certainly be the star of this one. The movie is still in development, but by the time it arrives, he will have earned that top billing on the poster.

I have to give credit to James (even though I am a Golden State Warriors fan). Not many basketball players can make a seamless transition from the court to the big screen... but he seems to know exactly what he is doing.