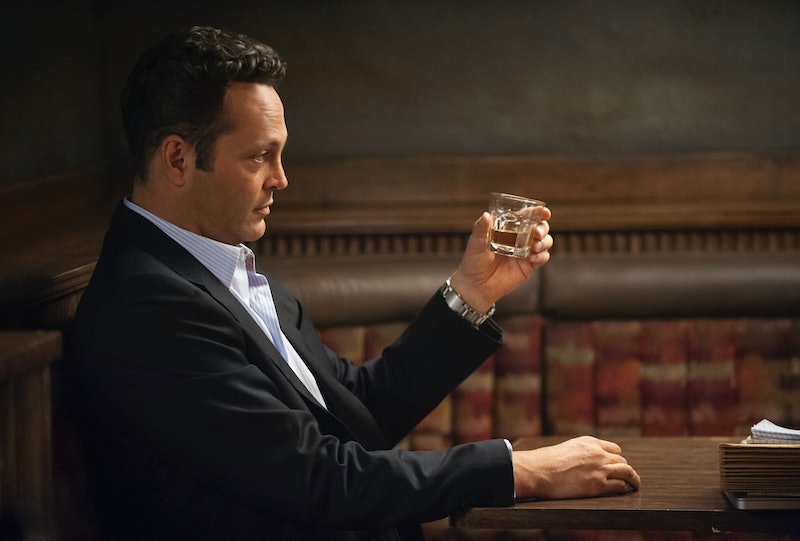 There's no use beating around the bush, so let's cut right to the chase: Vince Vaughn is awful on True Detective Season 2. What's up with that? For the record, I am a fan of Vaughn. I've been a fan of his for a while, dating all the way back to Swingers, through Dodgeball, and of course to Wedding Crashers. I can't say I was too keen on Fred Claus, but hey, sometimes we sit through Christmas movies because it's Christmas time. Now for something completely different, Vaughn is testing out the waters in a "serious" role that has me "seriously" confused, because this is not the Vince Vaughn I know and love. Why does Frank Semyon look so tired in every single shot? Is this intentional, True Detective?

When it was first announced that Vaughn would have one of the lead roles in True Detective , I cheered like I was at a sports game. Then when I heard that Vaughn was going up against Colin Farrell, I cheered again, because that pairing can't get any more #TrueDetectiveSeason2 meme for you. But that celebration was short-lived. Oh, Vaughn's not playing one of the detectives? Oh, OK. I guess that's fine, so who's he playing instead? Oh, a mob boss who like, maybe actually has a heart but, also all these people keep dying and he looks so damn tired all the time?

This is not the Vince Vaughn-starring True Detective I was expecting.

He's a fine actor. Really. Vaughn, if you're reading this, I actually saw Delivery Man (OK, fine, mostly for Chris Pratt this time, but you've got to understand). I've never come away from a Vaughn movie and been like, "did you guys see that? He was awful in it!" But this brings us to True Detective, where he's competing for space in my heart against Farrell, Rachel McAdams, and Taylor Kitsch. While clearly the winner here is McAdams (sorry, Kitsch), Vaughn should at least place second or third. He's actually further down towards the bottom, because I even like Ben Caspere more than him.

Maybe this isn't all your fault, Vaughn. Maybe we can blame some of it on Vinci. But here are the cold hard facts that have lead me to this dark, True Detective Season 2 place.

For Real, Why Is Frank Always Tired?

Has Frank slept in the last 20 years? I'm serious. In every single scene he looks so tired — even those that take place while he's in bed. Was there there like, loud construction next to Vaughn's house while he was shooting this show that prevented him from getting a good night's sleep?

Maybe every season of True Detective will give us a character who just waxes nostalgic about nonsense, because one character always has to live in a flat circle. McAdams' Ani hasn't given any sort of stagnant monologue yet. Kitsch's Paul really only says "the highway, it suits me." But here we have Frank, who is droning on and on and on about his ceiling. We get it, you don't like the water stains.

Come on, all we need is a quick shot of Owen Wilson and the Wedding Crashers trinity will be complete.

It's Hard To Root For The Bad Guy

True Detective Season 1 gave us two guys who might be the bad guy, and that idea carried us for an entire season. True Detective Season 2 is giving us a bad guy right away. It's really hard to get attached to Frank, because he's not even a stereotypical bad guy we can love to hate. He's just a business man who makes shady deals, lost a lot of money, and once pulled out some guy's teeth. None of that makes me invested in his character.

Frank's Not Really, Uh, Doing Anything

All of the other characters are doing something. Chasing bad guys. Working on police stuff. Frank's just doing... none of that. He's not a very exciting character. I know we're only three episodes into this season, but I already groan every time Frank comes on screen. I just have no idea what his character is even doing for the greater story, and I can only watch him rip teeth out of someone else's mouth so many times before I have to turn off the TV.

Though it may not sound like it, I am enjoying this season of True Detective a lot more than Season 1. One of the things I like best is that there are so many different characters, instead of Rust and Marty just driving everywhere together, not talking to anyone else. I also understand what True Detective is trying to do by connecting the three detectives to Frank, but so far, it's just missing the mark.

I love you, True Detective. I love you, Vince Vaughn. I just do not love you, Frank Semyon. And the worst part is, I can't even make any "he's the yellow king" jokes to cheer myself up about this disappointing role.

More like this
Everything To Know About True Detective Season 4
By Brad Witter
Everything To Know About The Flash Season 9
By Brad Witter
What Is the Net Worth Of Each 'Stranger Things' Season 4 Cast Member?
By Hugh McIntyre
20 Photos Of "Beefy" Jeremy Allen White To Tempt You To Watch 'The Bear'
By Radhika Menon
Get Even More From Bustle — Sign Up For The Newsletter