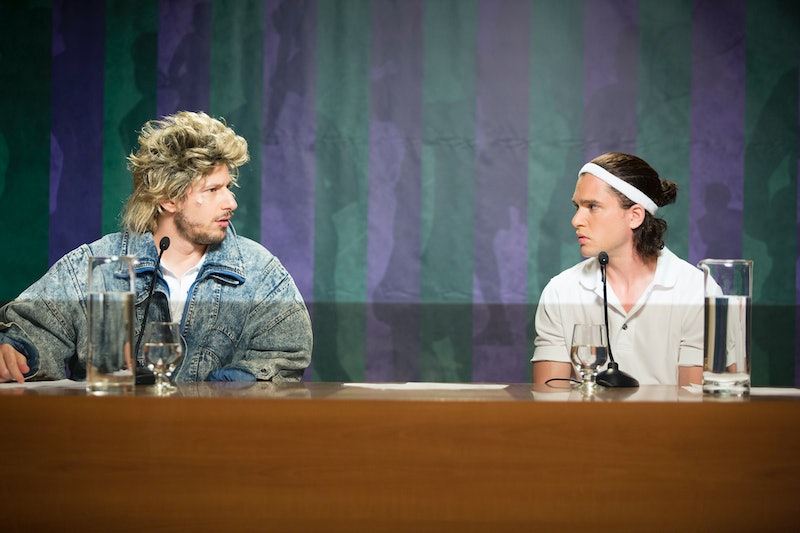 HBO has kept previews for their newest special, 7 Days In Hell , in heavy rotation for the last few weeks. The sports special boasts an impressive roster of tennis stars, and seeing as how Wimbledon is taking place right now, you might be fooled into believing that 7 Days In Hell is, in fact, real. But, the special does such a good job of convincing us that it's real, it's might be hard for those not up on their tennis (or Andy Samberg jokes) to not get confused. So, is any part of 7 Days In Hell based on a true story? I so wish I could tell you "yes." But, that's not the case. It's not a real sports story. But, even though it's not real, HBO does a damn good job at making us think it is. It's like a VH1 Behind the Music special, complete with a narrator and lots of found footage. Oh, sorry, maybe I should say "found footage," because everything has been created for this show.

In an interview with Entertainment Weekly, Samberg did mention that part of the storyline is sort-of drawn from real events, but very, very vaguely. One of the running jokes through the special (and there are a lot of running jokes) includes the Queen of England being mad at Poole — who's from England — for not winning the match. Part of that is true, from 1936 to 2013, no British citizen won Wimbledon.

The special is actually set in the past, 2001, and a Brit won Wimbledon in 2013, Andy Murray. As Samberg explains to EW, "We had conceived it before Murray won, so it was still being written in the midst of that crazy drought." And, that only adds to the humor.

So even though it's not real, it's still got the heart and the humor of the sport of tennis. I'm just kidding about that. Tennis is not a funny sport at all. But, you're going to think it is after watching 7 Days In Hell. Image: John P. Fleenor/HBO (2)