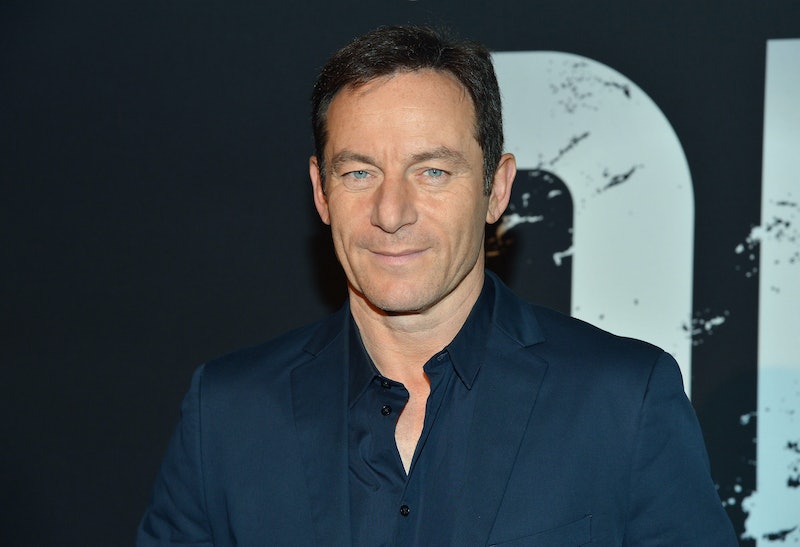 For six seasons Pretty Little Liars fans have spent many sleepless nights trying to figure out the identity of A. Even though it's finally been revealed that A is Charles DiLaurentis, the PLL audience has yet to put a face with the masked terror of Aria, Hanna, Emily, Spencer, Alison, and the entire town of Rosewood. Well, I might have just figured it out. Forget all those Charles and A theories you've been reading, because the face behind A just might be, wait for it, none other than Harry Potter actor Jason Isaacs. Wait... what? That's right, the man known as Lucius Malfoy might be A.

Who would have ever thought he could end up being the ominous figure haunting the Liars? Leave it to Pretty Little Liars creator I. Marlene King to really throw us off the scent. That's just so her. Now, I didn't just come up with this theory on my own. It popped into my head after seeing a tweet Isaacs sent Troian Bellisario, aka PLL's very own Spencer Hastings. On Friday, the 52-year-old actor posted the following: "Hey, @SleepintheGardn, my innocent 13 yr old seems to be addicted to #PrettyLittleLiars. Please start acting appropriately #iknowwhereulive."

Whoa. Is that a threat, Jason? Yep, it sounds like he's channeling his inner A and hopping on the PLL train. Of course, Isaacs probably won't end up being the true identity of A, but, hey you never know. Plus, based on these very convincing points below, Isaac's been leaving us A clues as Lucius Malfoy for some time now. Check it out.

Lucius wore Death Eater mask. Um, A's face is always covered too. Also, let's not forget about all those creepy PLL masks, not to mention that gas mask.

Lucius Wears A Lot Of Black

Anyone else analyze Charles' hair in the real-life dollhouse? Was it a wig? Was it real? Whatever the case, like Charles, Lucius' bleached hair was analyzed. Was it a wig? Did he color it? Is it silky smooth?

There's no doubt A likes to have power over the Liars. Since Season 1, A has pretty much dictated the girls' lives. Well, the same goes for Lucius, who loves being important and giving orders to others, especially Draco and poor Dobby.

Duh. Lucius is a wizard, so he obviously is magical. At times, doesn't A seem like a magical creature? How does A get from one place to the next in a matter of seconds? How does A build a dollhouse with prison-like security? Yep, A has magical abilities, for sure.

When he wasn't busy being a coward, he definitely had his scary moments. At one time or another, A has scared all of the Liars — and the show's viewers.

Clearly, Isaacs was using Lucius to prep for his major role as A. So, do you think Jason Isaacs really is A? Who knows. Plus, at this point, there's a really good chance, because I. Marlene King just loves messing with her fans that much.