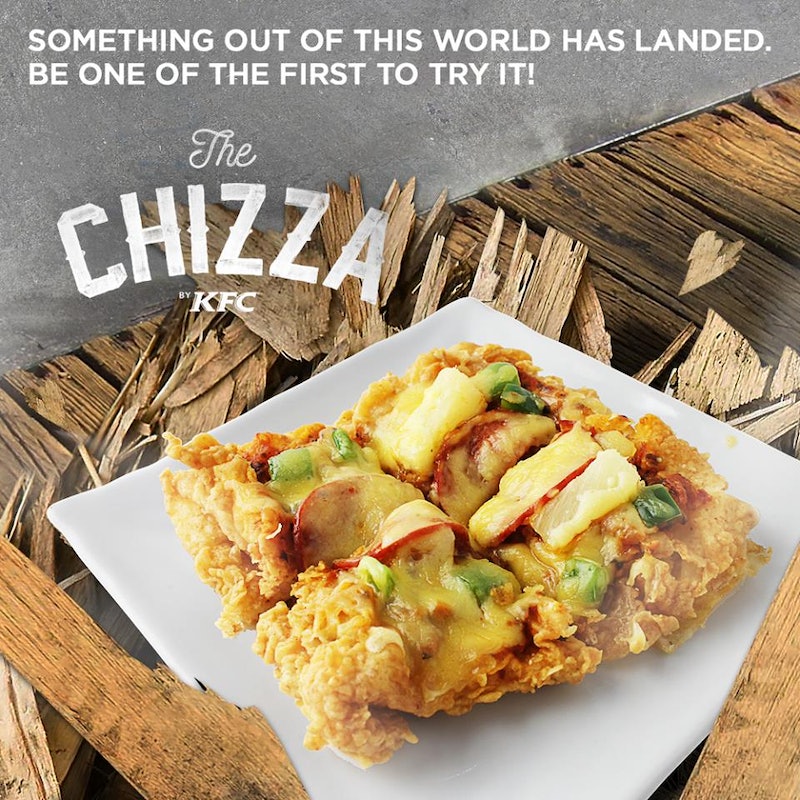 Fried chicken is good for a lot of things. Eating, comes to mind, for example. Also drumming, maybe, if you're eating fried chicken legs and into percussion instruments. But the latest thing to come out of the innovative kitchens at Kentucky Fried Chicken might be the most inspiring way to utilize fried chicken yet: The new "Chizza" from KFC Philippines is essentially fried chicken crust pizza. Yes, this is the second pizza-chicken hybrid to have popped up in the space of a week. This trend is showing no signs of stopping.

According to Grub Street, KFC Philippines is calling the Chizza "the craziest thing to happen to chicken and pizza," which is a pretty bold statement considering their Hong Kong branch also just released pizza-flavored fried chicken. Equally ballsy, perhaps, is that KFC made that claim when Domino's released their own version of fried chicken crust pizza back in April of 2014.

People are getting all riled up about this fried chicken pizza as if it's an abomination, but let's be honest: It sounds delicious, because it really isn't pizza at all. It's not like you would call anything with cheese and tomatoes on it a pizza. A caprese salad isn't pizza with lettuce for crust anymore than this thing is pizza with fried chicken for crust.

So, if it's not a true pizza, what exactly is this thing, then? Well, friends, I put forth the following thought: It's KFC's take on a chicken parmesan, a dish that famously covers fried chicken in marinara sauce and cheese.

Not so freaky now, right? We've likely all encountered chicken parmesan at some point in our lives, which kind of demystifies this whole Chizza thing.

While this fast food dish may not be a horrifying monstrosity, the history books are filled with examples of tragic fast food hybrids that... well... are. So, what are some of the worst offenders vying for the title of most upsetting fast food hybrid?

1. Jack in the Box Bacon Milkshake

Look, I'm as big of a proponent of putting bacon on everything as much as the next sentient human being, but when Jack In the Box debuted the Bacon Milkshake back in 2012, I think we were all a bit taken aback. Needless to say, it didn't last very long.

Oh, the Waffle Taco. It didn't sound like such a horrible idea at time: Make a breakfast taco using a waffle as the tortilla! People will love it! But eventually the Waffle Taco was retired; Taco Bell replaced it with the Biscuit Taco in March.

Pizza Hut is normally pretty on point with their food mashups, but their UK released, Hot Dog Stuffed Pizza, was bad news. So, for that matter, was the Hot Dog Bites pizza that hit the U.S. recently.

These are only available at Dunkin Donuts' in Singapore, which is weird because I feel like they'd be a huge hit in the States.

All right, Carl's Jr. You win this time. These sound delicious.