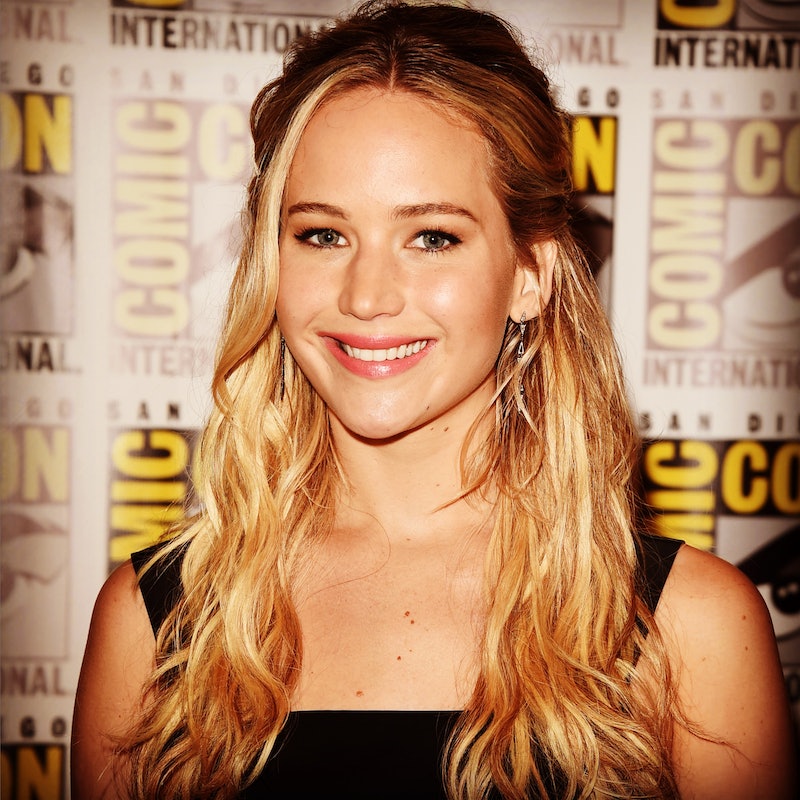 Look, I know I'm about to state the obvious here, but Jennifer Lawrence is kind of amazing, right? She's an incredibly funny, down-to-earth, and talented woman who's made a name for herself in Hollywood because of her unstoppable charisma. I love her, and I'm basically down to see any movie she ever does. And while her projects have run the gamut from badass revolutionary ( Hunger Games for life!) to emotionally complex eccentric and everywhere in between. The one type of movie she hasn't really taken on up until now, however, is a full-blown romance, but all that's about to change since Lawrence signed on to star in The Rosie Project , a love story based on a Graeme Simsion book of the same name

In case you're unfamiliar with the story — and let's be honest, you probably are; I was! — The Rosie Project tells the story of awkward genetics professor Don Tillman, whose life is orderly and organized in every way... and understandably devoid of romance. In order to find the perfect partner, he devises The Wife Project with a suitable list of criteria that his desired wife would have. Of course, his list falls by the wayside when he meets Rosie, a bartender who he initially dismisses as a potential mate but agrees to help on her quest to find her biological father. I won't spoil anything further (though a quick Google search could do that for you, so beware!), but it's a really touching and romantic story that I think Lawrence will totally do justice.

The big screen adaptation of Simsion's story will be penned by 500 Days of Summer screenwriters Scott Neustadter and Michael Weber, who have some serious indie cred (which suits Lawrence's talents) but also some real writing chops, so it should be good. It's yet to be revealed who will take on the role of Don, but it's also clear that Columbia Pictures wanted to waste no time in securing Lawrence — arguably the most popular actress of her generation, and certainly one of the biggest working today — for the movie. They're pretty smart, too; just knowing she's in it will make me much more excited to see it, regardless of who plays opposite her.

As for what made Lawrence choose The Rosie Project as her first real mainstream foray into romantic pictures, I'm assuming she has faith in both the writers and the material itself to think it's worth it. Of course, she did appear in the period drama Serena, which never really got off the ground. Also, she's also signed on to star alongside Chris Pratt in the sci-fi love story Passengers, but The Rosie Project is arguably a bit more grounded. Either way, if it's good enough for Lawrence, it's good enough for me, and I can't wait to see it.