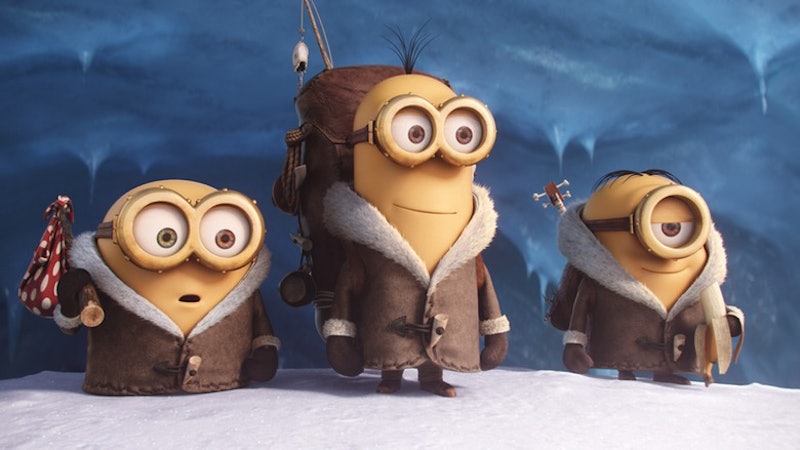 When it comes to your weekend plans, I have a feeling that many will be heading to the movies to check out Minions . According to The Movie Network, the prequel to the two Despicable Me movies — which opens on Friday — is predicted to earn over $100 million this weekend, and I wouldn't be surprised if it surpasses that amount. Everywhere you look, people are obsessed with Minions, and the animated film is a star-studded event. The likes of Jon Hamm, Michael Keaton, Steve Carell, and Geoffery Rush are all on board to voice the little yellow helpers, and that's great. However, I'm sure not the only person who's wondered one very important thing: Why are all the Minions male?

It's true that there are indeed female voices used in Minions. Sandra Bullock has the most pronounced part, voicing the film's villain, Scarlet Overkill, though she's decidedly very non-Minion — she's actually human. So what's up with the lack of lady Minions? As the film's creator, Pierre Coffin, told The Wrap, apparently because Coffin just couldn't imagine those "dumb" little creatures being women.

"Seeing how dumb and stupid they often are, I just couldn’t imagine Minions being girls," he explained. It's a comment that I suppose is meant to be a compliment, and suggest that Minions is a feminist movie.

However, though Coffin's explanation, at face value, does make Minions seem rather feminist — he's saying women are too smart, cunning, and resourceful to be portrayed as Minions — it's still disappointing that there isn't female representation amongst the Minions. While I certainly don't expect all films and stories to center on women, why can't female characters get in on the heroic fun once in a while? The Minions are adorable, heroic creatures, so having a female character amongst the pack would have been a great statement to make.

Because, although it's possible that Coffin didn't think of this before speaking about the lack of female Minions — not to mention, I'm sure he in no way meant any harm by making the film's leading antagonist female — it's still something worth thinking about.