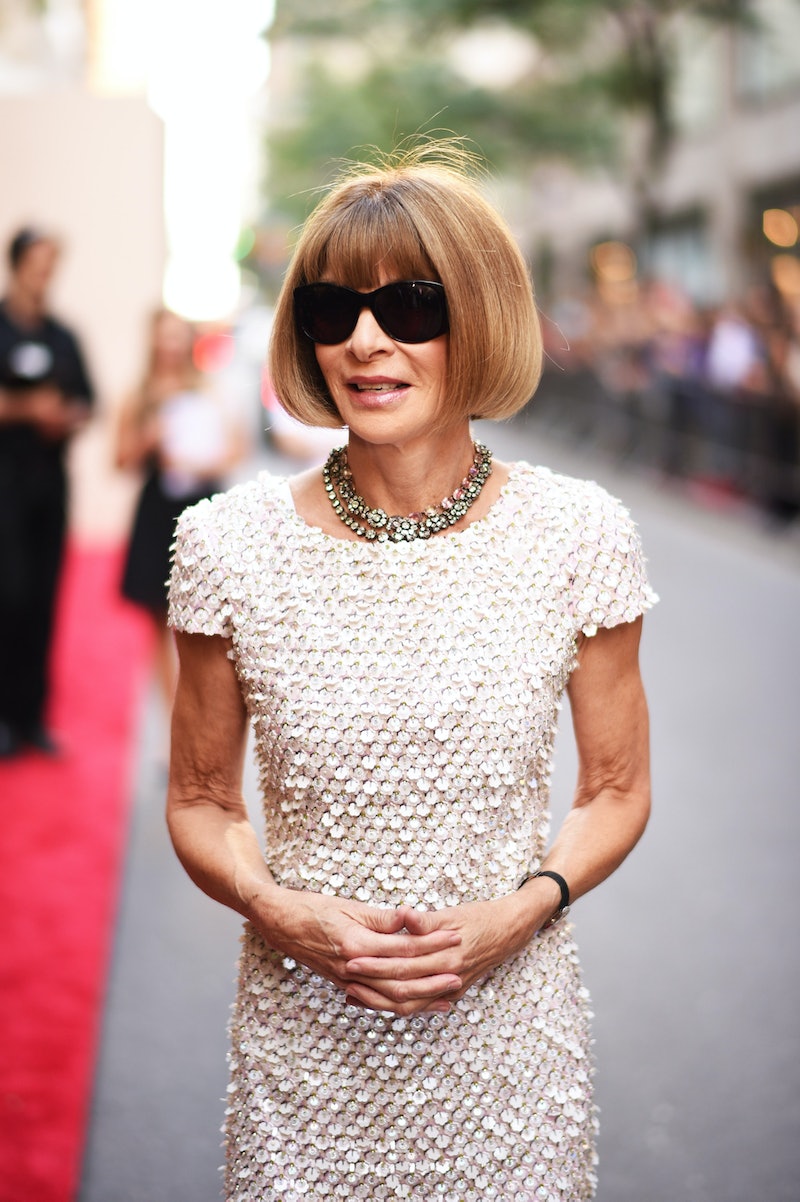 Move over, supermodels and pop stars... the first lady of fashion wants to show you how it's done. Anna Wintour posed for Mario Testino's Towel Series in her bathrobe and absolutely slayed. Vogue's Editor-in-Chief is the 82nd subject in Testino's ongoing photo project that features fashion icons like Kate Moss and celebrities like Justin Bieber wearing nothing but a towel (or robe, in some cases).

Wintour's Towel Series photo was shot in black and white and shows the editor in her signature bob and half smile/smirk. Her arms are crossed to show that she remains confident even in such a classy state of "undress," yet she's not wearing her trademark sunglasses. She is looking right into the camera as if to say that anything that the beautiful and relatively younger people that appear in her magazine can do, she can do better.

Vogue's EIC also looks quite comfortable posing for her longtime collaborator Testino, who recently photographed Princess Charlotte's royal christening as well as Wintour's passport photos. The legendary photographer's casual style is what drew Wintour to his work, which has appeared several times in her magazine.

"He's not a pretentious person, his work is for everybody," Wintour said about Testino in 2012.

There's no denying the influence that Wintour has on fashion, and to some degree, pop culture. However, there have been a few times, like her Towel Series photograph, when she has followed a trend or was a few steps behind a trend that others (with considerably less knowledge and appreciation for high fashion) have done before her.

Here are three examples of Wintour arriving fashionably late to the game, but still putting her personal stamp on it like a BOSS.

Ambitious and tough... with a heart of gold.

Wintour put the controversial couple on the cover of Vogue, but she has vowed to never take a selfie like Kim (yet).

Even with the glasses, she's totally upstaging Zoolander and Hansel in this photo.

More like this
Kate Had A Solution When Tom Cruise Broke This Royal Rule At The 'Top Gun' Premiere
By Frances Stewart
Machine Gun Kelly Wore A $30K Diamond Mani To The BBMAs
By Paris Giles
How To Master Baby Braids, According To TikTok
By Tomi Otekunrin
All Of Kourtney Kardashian’s Wedding Dresses
By Allie Fasanella
Get Even More From Bustle — Sign Up For The Newsletter