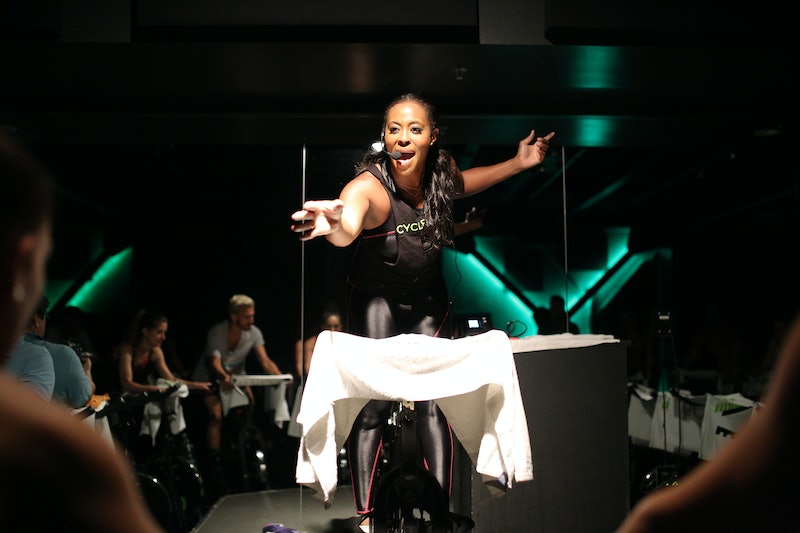 I'll admit it, when I was offered the chance to take a class at Cycle House in West Hollywood, I was a little nervous. OK, so nervous might be a bit of an understatement: I thought there was a real chance I wouldn't survive the class. After all, I had watched the first episode of E!'s Hollywood Cycle, the new reality show about the West Hollywood fitness hot spot, in which I witnessed rows of uber-fit cycle enthusiasts spinning at lightning speeds. Luckily, I'm pleased to say not only did I survive chief ride officer Nichelle Hines' cycling class, I also had a ton of fun — even if I did walk out completely drenched in my own sweat.

The show may be called Hollywood Cycle, and take place in one of the trendiest neighborhoods in LA, but Cycle House definitely isn't just a place to be seen — it's a place to get a great workout and achieve your own personal fitness goals. "I think the first thing that you need to get in shape is your attitude, your perception of everything," says instructor Hines, who is featured on the show. "What does get in shape mean? Do you want to do a marathon? Do you want to climb a mountain? The number one thing is 'What do I want?' and you fill in the blank."

Hines may have a reputation for being a tough instructor, but if anything, it's tough love: "Coming into my class for the first time I know isn't easy, I'm not going to yell at someone who is brand new. I might tell them to relax their shoulders a little bit... I do push, I am aggressive... but it's never to hurt anyone or make anyone feel bad. It's all about finding that next level."

If Hines is all about taking her students to the next level, then I was on level... well, one. So what did I take away from a Cycle House class? Here are some things I experienced during my very first ride with Hines:

The Front Row Is No Joke

If you need some #workoutgoals, look no further than the people who sit in the front row of a Cycle House class. I'm not talking about how they look — I'm talking about the fact that these cycle enthusiasts are killing it at every single moment in the class. Seriously, we should all hire these people to use their insane pedaling to power our electrical grids — no matter how high the resistance was turned, these cycle stars were working it.

Hines Has A Few Surprises Up Her Sleeve

Like, say, placing her iPhone on top of one cycler's head in order to make sure that she maintained proper balance. Major props for the front row cycler who didn't drop it.

You'll Feel Like You're In A Club, But With Exercise Instead Of Booze

Hines loves music and is an equal opportunist when it comes to different musical genres, telling me that students can hear everything from Nirvana to Aerosmith to Jay Z in her class. During my ride, Hines blasted Drake and encouraged us to climb a seven-minute "hill" to a Rihanna tune, which almost made my legs feel a little bit less like jelly. Every song blasts through the speakers, and the class is almost completely dark, so you're basically thrust into a world dedicated to exercising your heart out.

Had it not been for Hines, I may have cheated a bit on upping the resistance (OK, OK — I would have cheated more. It was my first class!) While I did my best to keep up with the other super cyclers, Hines affirmed all of us that we were here for a reason — to give this class our 100 percent. After all, why do anything in life only 70 percent?

Be Prepared To Sweat

As I type this, my hair is still slicked with a super gross layer of sweat, and that was after I blasted the air conditioner on the drive back. I like to think that it was sweat well-earned.

After spending a class with Hines, I have to say that I completely understand the addiction that her loyal Cycle House following has for these classes. They're crazy tough, but also empowering: you leave Cycle House feeling like you can do pretty much anything. And the very first thing you'll want to do? Shower off your cycle sweat — it is no joke.

More like this
The Richest 'Bling Empire' Cast Member Is...
By Hugh McIntyre
Kim Kardashian Reacts To Kanye West’s Diss Song “Eazy” On 'The Kardashians'
By Jake Viswanath
Twitter Has Very Mixed Feelings About The New 'American Idol' Winner
By Jake Viswanath
Kourtney & Travis Crashed His Daughter’s TikTok Live In Their 2nd Wedding Outfits
By Grace Wehniainen
Get Even More From Bustle — Sign Up For The Newsletter