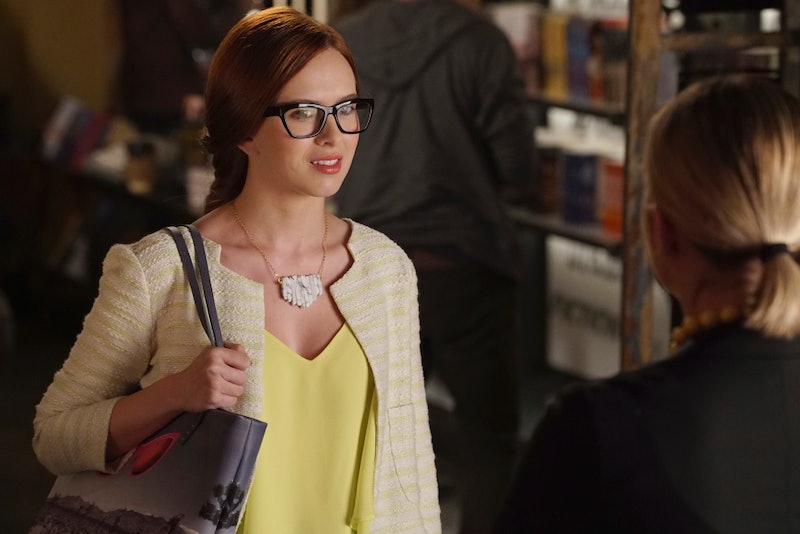 Lesli Stone has basically been the very picture of sketch from day one — look back to her first appearance in Pretty Little Liars Season 5, and you'll recall that there's always been something off about her. Everything from the fact that she was conspicuously absent from her so-called friend's so-called funeral to her testimony against Ali and the rest of the Liars in court has drawn attention to her suspiciousness. And all the new information we have from Pretty Little Liars Season 6 on Lesli makes her seem even worse. Taken together, her extended stay in Radley (she was purportedly there long enough to know both Bethany and Charles), her ability to go HAM on people in coffee shops ("You bag of HAIR!" is my new favorite insult), the new photo evidence of the womanly Black Hoodie, and the suspiciously authoritarian way she treated Mona at the end of "She's No Angel," all add up to make her look like quite the A candidate. So after all of this time, could Lesli really be Big A?

No matter how suspicious a picture she paints (and I'll admit, it's a pretty darn suspicious one), I'm inclined to think no — and here are a few reasons why.

She Has "Red Herring" Written All Over Her

You know how everyone's angry about the whole Andrew distraction? Well, this whole "Lesli is A" thing is totally Andrew 2.0. She came out of nowhere, and she basically seems like a huge misdirect conveniently introduced to throw us off the real A's trail.

We Can't Be This Close To Finding Out Who A Is

This week's episode is even called "No Stone Unturned," and the summary says it follows the Liars on their quest for "concrete proof" that Lesli is their "tormentor in a black hoodie." Now, if this were Season 6, Episode 10, I'd be thinking there might be some merit to it — but seeing as we still have five more episodes until the summer finale, it's a bit too soon for IMK and co to be showing us their hand. No, you can bet we won't be finding out A's true identity until the very last second (and it'll likely be part of a huge cliffhanger that leaves more questions than answers in its wake).

King rather famously tweeted that to really glean the good A clues, you had to go back to Season 3 — and as Lesli didn't come into the fold until Season 5, she's a couple years too late to fit the bill. Just to play devil's advocate, though (because one must ALWAYS play devil's advocate in the world of PLL theory-brewing), Lesli's Radley connection to Mona could conceivably make her qualify as an honorary Season 3 character — after all, who better to steal the game from Mona at Radley than... someone else at Radley?

It would be an interesting plot twist/subversion of the two-year-old tweet that's treated something like gospel on all of the popular PLL Tumblrs and Reddit threads (especially when you consider the fact that "Lesli Stone" is an anagram for "stolen lies"), but even so, I'm not convinced, and neither are the hosts of Bustle's Pretty Little Liars podcast.

It Would Just Be Disappointing

We've been analyzing old episodes, scouring screenshots for missed clues, and frequenting Reddit for theories since 2010 — how awful would it be if some random who showed up in Season 5 with about five minutes of screen time turned out to be the person responsible for tormenting the Liars (and us) for years?

She May Still Be On The A Team

That said, I'm not opposed to Lesli being involved somehow — I'm just hoping she's not the end all, be all as far as Big A is concerned. I've actually seen a few cool theories that she might actually be Bethany Young in disguise (though how A faked the DNA test result on her exhumed body, I won't even begin to speculate), and I'm also very intrigued by Tumblr user tremolux's notion that she could be Toby's secret sister (which would fit in nicely with the whole "Toby is A" line of thinking). There are also cool theories out there that she's the Queen of Hearts, as posited by prettylittlesleuth, and/or Red Coat, like danceintherain--x thinks.

What do you think? Is Lesli Stone endgame? Or just another red herring in an infinite string of red herrings?