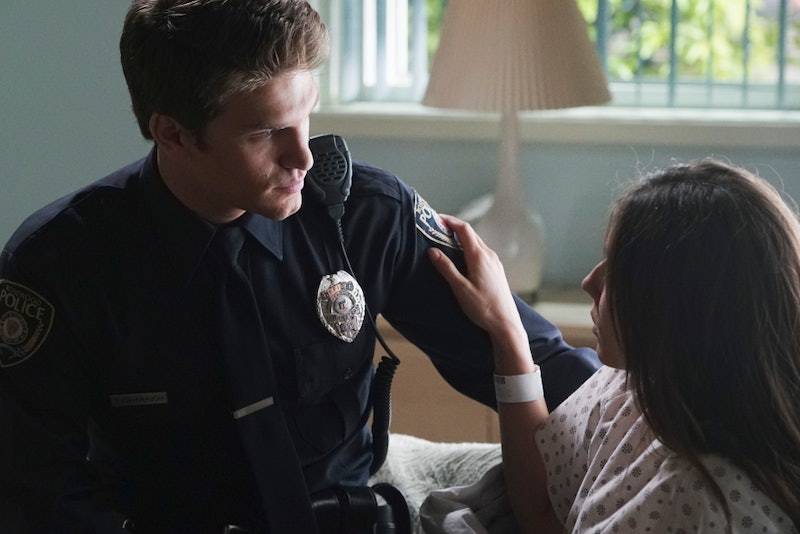 The love interests on Pretty Little Liars have always been something of a hot button topic when it comes to naming A candidates. I mean, remember the uproar when it looked like EzrA was going to happen? How about when Emily was getting really close to Ali, back when we all thought Ali was A? Heck, even Perfect Boyfriend Extraordinaire Caleb Rivers hasn't been exempt from all of the A speculation (recently, it was his shifty over-protectiveness that got fans wondering if he could be moonlighting as Charles). That said, you know who the one suspicious boyfriend to rule them all is? Yeah, none other than Spencer's main squeeze, Toby Cavanaugh, who might be Charles DiLaurentis after all.

Think about it: Go back to the early seasons, and you'll remember that Toby and the Liars didn't exactly get off on the best foot. Then, you've got his connection to the ever-shady/ever-incompetent Rosewood PD to contend with, as well as his past with the A Team. Lately, the whole Charles situation has shifted focus from one of PLL's former top Big A suspects — but the introduction of Charles doesn't have to mean that Toby isn't A, because we still have no idea who Charles really is. So could Toby actually be Big A? Let's see how things stack up against him. And for even more Charles suspects, check out Bustle's Pretty Little Liars podcast.

1. Keegan Allen Has Been Very Outspoken About A

Allen was one of the first people who found out A's true identity, and he also happens to be the one who called the whole thing "heartbreakingly beautiful" in an interview with Bustle. Are his loose lips mere coincidence, or something more?

Just to play devil's advocate here, though, it's worth pointing out that I. Marlene King didn't post that fateful "'A' finally knows 'A' is 'A'" tweet until months after Allen dropped his truth bomb — but then again, we all know how fast and loose King and co. like to play with their cryptic spoilers. Plus, with all of the layers of identity going on, who even knows which facet of Big A either of them was referring to.

Toby's been dating Spencer for so long now, it's easy to lose sight of the fact that he was one of the OG A suspects. After all, he and the Liars started the series with some pretty serious bad blood. Ali was blackmailing him for his non-consensual relationship with Jenna, and made him take the fall for blinding his stepsister; a feat that got him sent away to reform school for an entire year. As far as motive goes, that's rock solid.

Sure, sure, he was just doing it to "protect" Spencer, but it's hard to ignore his A ties. Besides, it's kind of the perfect cover when you think about it — it certainly won the trust of the Liars, not to mention the audience. And wouldn't it be just like PLL to reveal that Toby was actually a triple agent all along?

Yeah, so there's a file in Radley for someone named C. Cavanaugh, as pointed out on Reddit by JaneDarkBloom. Fans in the know were quick to point out that the file was ostensibly named after Chris Cavanaugh, a digital imaging technician for the show (as a sort of Easter egg, you can find lots of names of crew members all over PLL) — but it's still pretty darn suspicious, no?

5. It Would Tie In To The Marion Cavanaugh Mystery

The whole Marion Cavanaugh/Radley/possible-murder/possible-accident is one of PLL 's major unsolved mysteries, and as one of the more intriguing enigmas of the show, Marion's at the center of her fair share of theories. Some have posited that Marion could be Charles' mother (some versions of this theory also point out that she could be Jessica DiLaurentis' secret twin). Anyway, that would handily make Charles Toby's brother — or, if you take the logic one step further, it's not too much of a stretch to say that Charles could actually be Toby... right?

6. Toby May Have Been Dead All Along

Now, if you really want to get crazy, you could go down the evil twin route. After all, the PLL books set the precedent for a twin murder/switcheroo scenario, and then there's the matter of the Toby doppelgänger body Spencer found in the woods (you know, the one with the tattoos and motorcycle helmet that literally sent her screaming to Radley at the end of Season 3). Could Charles have murdered Toby and taken his place?

It may sound crazy, but then again — we never did find out who that body belonged to, did we?

7. He's One Of The Most Satisfying Candidates

Would it be devastating? Oh yes, completely — but there's no denying the fact that the closer whoever turns out to be A is to the Liars, the more grimly satisfied we'll all feel. I mean, how disappointed were we all with the whole Charles reveal at first? The more central A is to the show, the better, and it really doesn't get much closer than Toby Cavanaugh.

What do you think? Could Toby have a secret identity? A secret twin/brother? A secret murdered twin? Guess we'll have to wait until the Pretty Little Liars summer finale to find out.

More like this
Everything To Know About The 'Pretty Little Liars' Reboot On HBO Max
By Mary Kate McGrath and Jack Irvin
Why Simone Ashley Had To Study Snails For Intimacy Training, Pre-‘Bridgerton’
By Grace Wehniainen
Don't Expect To See Your Fave Modern Royals Depicted On 'The Crown' Season 6
By Jack Irvin
James Marsden Kept Teddy’s Westworld Season 4 Return A Secret “For Years”
By Brad Witter
Get Even More From Bustle — Sign Up For The Newsletter