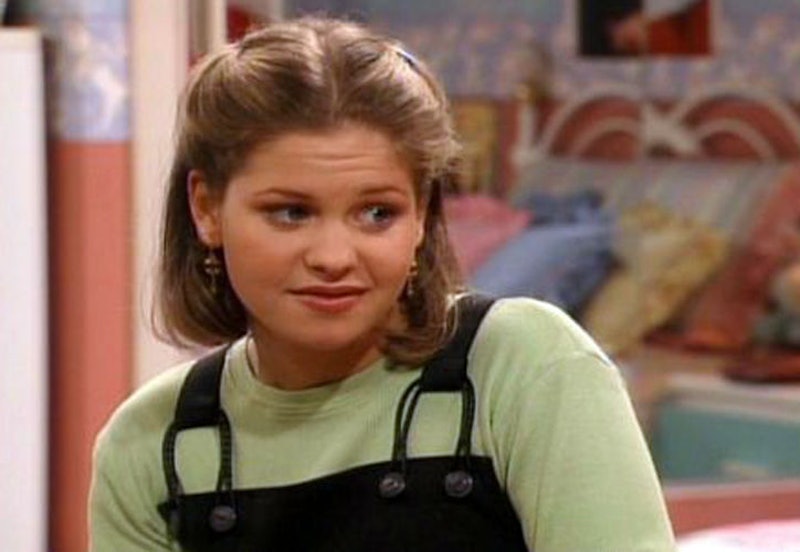 If there's anything that we learned from Full House , it's the importance of family. After all, that's the theme of the show: your family is made up of the people who come through for you when you need them the most. When we think of the family that really came through in the clutch, most people think of Uncle Joey and Uncle Jesse — after all, they put their entire lives on hold so they could help Danny raise his three little girls after their mother died. While they certainly deserve the accolades, let's not forget that there were other family members who also kept the Tanner family together. I'm talking specifically about D.J., the eldest Tanner daughter and a person who qualifies for the Best Big Sister award.

D.J. was barely in middle school when her mother died and we first checked in on the Tanner family, so it wouldn't be that much of a shock for audiences to have been introduced to a total brat. Somehow, Full House completely avoided those less-than-stellar moments every middle schooler goes through (save for a few bad decisions, usually spurred by BFF Kimmy). Instead, D.J. was wholly mature, responsible, and a fiercely protective and caring sibling to Michelle and Stephanie. D.J. was the best big sister that they — or pretty much anyone — could ask for.

Here's why D.J. rocked as a big sister, and why I still want her as my own big sis today:

1. She Was The Best Person To Go To For Hair Advice

Seriously. Did you think that volume was an accident? D.J. worked damn hard to get her hair that height, and was more than happy to share her tips and tricks with her sibs.

2. She Knows The Difference Between Right And Wrong

D.J. made plenty of her own mistakes, but she also made them a lot sooner than Michelle or Stephanie could. She knew all about make out parties before Steph ever got dragged to one by Gia.

3. She'll Sacrifice Her Own Fun To Help Her Family

What middle schooler skips a sleepover to take care of her family when they have the chicken pox? Someone who should get a serious raise in their allowance.

4. Her Wardrobe Was Always On Fleek

Imagine being Stephanie and getting to rock this hand-me-down for a formal dance. I mean, that dress wasn't even just cute for the '90s.

5. She Did The Whole "Trial And Error" Thing With Makeup

Enough times to be able to tell her sisters how to gently swipe mascara. (And how not to get it in your eye.)

6. She Was A Pro At Conflict Resolution

A good sister knows how to shut fights down... even at her own expense.

7. She Saved Her Siblings From Awkward Boy Talk With Danny

Danny already had to see D.J. and Steve make out alllllll over the Tanner residence, and had the dreaded "guy talk" with Deej long before Stephanie and Michelle were thinking about guys. It helps not to be the first person macking on a dude in your living room, and I'm sure that Steph and Michelle were wholly grateful.

8. She Knew How To Lay Down The Law

Sometimes a sister has to get tough, especially when it comes to sharing her room with her younger sib. I mean, hello, a girl's got to have her privacy.

9. She's Always There For Heart-To-Hearts With Her Sisters

Really, who wouldn't want a sister they could tell absolutely anything to? (Even if it was that the jock you like stole your pencil.)

That settles it: D.J. was simply the best.