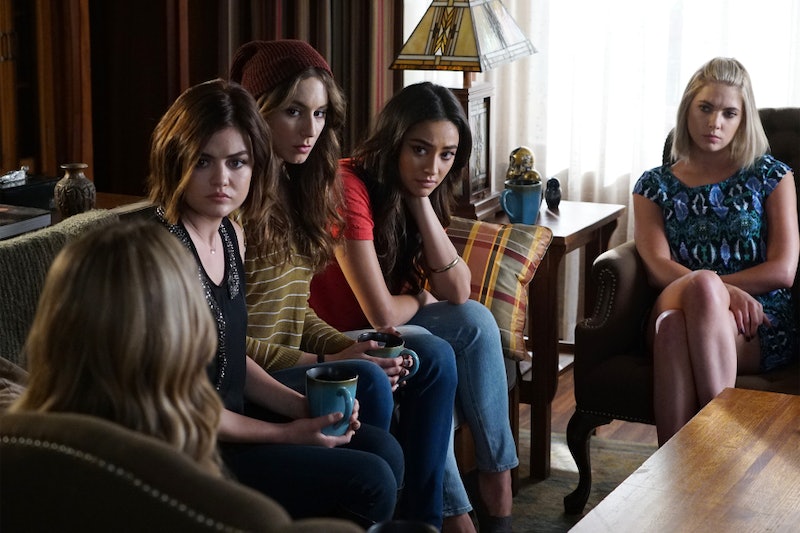 Are you a die-hard fan with a whole host of Pretty Little Liars theories? Or maybe you're more of a theory browser than a theory brewer. Either way, if you're dying to know who Charles et al are, Tumblr is kind of the place to be. It just so happens to be home to some of the most sophisticated PLL theories around. If you've thought of it, chances are, someone has devoted many hours to re-watching old episodes, labeling screenshots, trawling I. Marlene King's Twitter account for clues — and compiled it all into a cogent and compelling theory.

Basically, I'd go out on a limb and say that Tumblr's collective PLL IQ is quite high — so when King told People that some fans have already solved the A mystery, I didn't have any trouble believing it. Those viewers probably have a carefully curated Tumblog filled with meticulously researched theories.

Now, as we get closer and closer to finding out Big A's true identity, more and more of the aforementioned excellent theories are getting debunked, which is a major shame, because some of them carry some real storytelling chutzpah — storytelling chutzpah, which LBR, often manages to far outstrip that of the show itself. So, with that in mind, here are 8 theories that were better than what actually happened on the show, as well as the Bustle PLL podcast, which is filled with quite a few theories.

1. Andrew Was The Great Charlemagne

IMK was the one who got the ball rolling on this theory, and the almost uncanny resemblance between the two actors set it in stone, as described by prettypllcrazy on Tumblr. It's since been debunked, but it would have been a nice Easter egg, right?

2. Melissa Was In The Barrel

Melissa's had a target over her head for a long time, and after she went AWOL on the show for a while (when she was supposedly living in London with Wren), some fans, like prettylittletheorypll, started wondering if she had been secretly murdered. Fortunately, it turned out that Melissa really was in London — though the mystery of the barrel is yet to be solved. If Wren is Charles, however, like the video below suggests, does that mean Melissa's move to London was more sinister than it appeared? We'll have to wait and see.

Now, I'm generally not one to accuse Caleb of anything, but what if he did it just to protect Hanna? Rosewood-clues pointed out that Mona and Caleb always had something of an adversarial relationship — he never trusted her (with good reason; I STILL don't trust her). That, paired with his protectiveness over Hanna led some to believe that he might have murdered Mona to keep Hanna safe.

4. Aria Was In Radley

Remember when the promo for "She's No Angel" heavily hinted that Aria had a secret past in Radley? And then it turned out they were actually talking about Lesli Stone? Well, arewea (best Tumblr handle ever, by the way) makes a very strong case for the fact that Aria might have a history of mental illness.

... which I suppose could still end up being true — just because Lesli was in Radley, doesn't mean Aria wasn't too.

This very popular theory, detailed by radleypatientx, was sadly debunked when it was revealed that Charles was Jason's older brother, not identical twin. It's a little corny, sure, but the PLL books did set a precedent for a Radley twin taking the place of a non-Radley twin (as part of a long quest for vengeance for a life unlived). Besides, the evidence stacks up quite nicely, what with Jason's inconsistencies of character, his suspicious elevator accident, and the subsequent elevator accident wounds that JUST SO HAPPENED TO MATCH the wounds on that mysterious Toby lookalike corpse Spencer found in the woods.

It would have been cool, guys.

Man, that would really be the ultimate nail in the Emison coffin, no? It's a bit of a schmaltzy theory, sure, but come on: How awesome would it have been if Nice Girl Emily had murdered her unrequited love in a fit of jealous rage, as suggested by Rosewood-clues? Even Em suspected herself at one point, though that's because she was conflating the night Ali went missing with the night she was drugged and taken to her grave.

7. Ali Was In The Witness Protection Program

Well, I guess technically she was in the Mona protection program (after all, Mona was the Olivia Pope to Ali's Quinn Perkins on whole escaping running away front), but how cool would it have been if the government had been involved? Rosewood-clues thought so, and that the Witness Protection Program had even helped Ali fake her death.

I think we're all familiar with the "Aria is A" theory — but have you ever considered the possibility of HannA? Rosewood-clues makes a surprisingly strong case for the matter, citing everything from her mad forging skillz, to the daily verbal abuse she suffered from Ali, to her slightly shifty look in the show's opening titles.

Now to be fair, this hasn't been debunked yet, so there's a slight possibility it could still end up being true — but at this point, it's looking pretty unlikely, so I'm sticking it on the list.