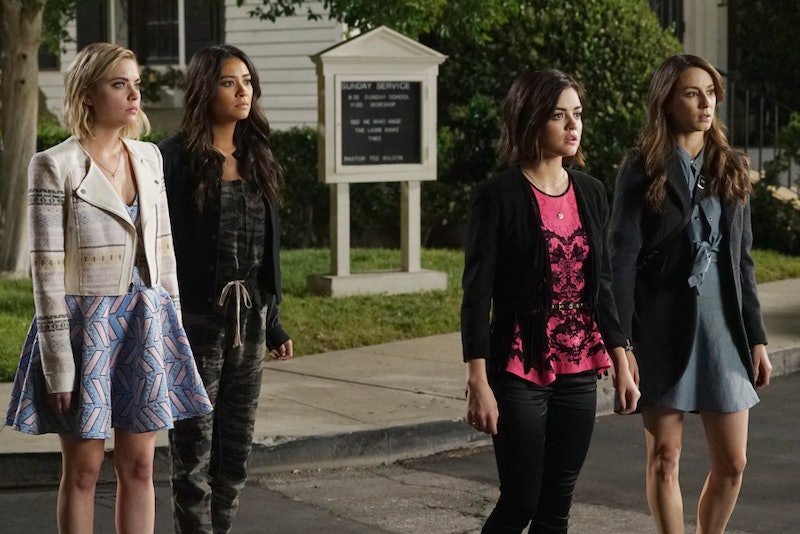 Things are really heating up as we hurtle towards the Pretty Little Liars Season 6 summer finale, and every day brings us that much closer to solving the combined mysteries of A/Charles, Black Veil, Varjak, et al. And you know what else we have to look forward to? The six-year time jump set to catapult our favorite perpetual high school students into early adulthood. What can we expect from this brave new Rosewood, though? What will the view look like six years from now? Fans have more than come through with PLL time jump theories that give us an idea of what we might want to start preparing for now.

First off, cast and crew alike seem pretty stoked for the time jump. Lucy Hale told Bustle, "Hopefully it’ll be a new side of the show that you’ve never seen before. I’m really looking forward to filming those episodes," while showrunner I. Marlene King expressed her excitement for all the new possibilities the time jump will afford to Entertainment Tonight, namely "Getting to be more grown-up, and getting to make more grown-up mistakes, and grown-up decisions." Oliver Goldstick also revealed what's ahead to Entertainment Tonight.

It's really satisfying jump with some wonderful surprises...We've sort of set up their sights and talents and interests and loved ones in previous episodes. So you won't be like, 'Oh my god where did that come from?!' But there are some things you won't see coming.

In a nutshell? It's officially time to get pumped, and here are a few theories to stoke the fires.

1. A Is Probably Still Out There

Look, we know Charles is Big A — but King has been very coy about the possibility of a distinction between Big A and Uber A... so even if "Game Over, Charles" answers everything we need to know about Big A, Uber A could still be out there. After all, we know someone has to be out there, giving the post-time jump Liars a hard time, otherwise it just wouldn't be PLL.

2. There Could Be Another Murder

Fans have been speculating on what could bring the girls back together after (presumably) attending colleges and starting different lives outside of Rosewood... and another murder (or disappearance) would definitely do the trick nicely. Plus, there's the little fact that a hearse has reportedly been spotted on set of Season 6, Episode 11, aka the first episode post-time jump...

3. Alison Could Be The Victim

We all know PLL loves to bring things full circle, and what could be more fitting than the actual death of Alison DiLaurentis?

Tumblr user prettylittleliarsbae posited that the event that brings the Liars together again after all those years, could be the publishing of Ezra's true crime novel. I mean, it would be about time, right? It's a little less on the nose than the disappearance/murder of another girl, but you can bet it would still open many, many cans of worms.

There's basically a whole Reddit thread devoted to the fact that Toby's not exactly the most competent cop around... and we all know what that means in Rosewood, home of the worst police department in the country.

In all seriousness, though, whether he ends up being a good cop or a bad cop remains to be seen. But if he sticks with the force (and ascends up a few levels), it could make for some pretty interesting storylines, especially if he and Spencer stay together. However, my best Spoby prediction is that they'll be broken up, but still secretly in love.

Most of the girls have been in fairly long-term relationships throughout the show, but if we're jumping several years into the future, chances are they're not all going to still be with the same person. TVLine recently confirmed the casting of Jordan, "a sophisticated-yet-approachable 27-year-old working in the fashion industry," and Liam, "a 24-year-old editorial assistant from Boston." If I'm not mistaken, both dudes sound like pitch-perfect potential love interests for fashionista/photographer/creative writer extraordinaire Aria Montgomery, right? They could definitely both work as future beaus for Spencer and Hanna, but still — I'd watch out, if I were Ezra!

This started out more as wishful thinking, but it's starting to look like more and more of a possibility — after all, did you see the snapchat Ashley Benson posted with a potential engagement ring? Plus, Oliver Goldstick hinted at a possible wedding post-time jump — and who fits the bill better than Haleb?

Though maybe Emily should be the one to get married, thanks to the recent SCOTUS ruling!

This rumor started off when Tyler Blackburn said in a game of Two Truths and a Lie that Hanna might be experiencing a pregnancy scare in Season 5. Then it really took flight when Blackburn and Benson posted faux-pregnant IGs together.

Emily's extended time at the shooting range with her father's guns, coupled with her desire to protect herself and her loved ones, quickly got fans thinking that an enlistment may be coming down the line for her.

Astute Redditor kreezy also pointed out that "Songs of Innocence" could have held more clues with regards to the Liars' future careers — she pointed out that in addition to Emily's marked predilection for field jackets and firearms, Hanna giving her room a makeover could point to a job as an interior decorator, and Aria's renewed interest in photography might hint at a career in photojournalism or fashion photography. Food for thought, eh?

10. Still, Don't Expect The Liars To Have It All Together

When you're 17, 24 seems like full-blown adulthood — but, speaking for 24 year-olds everywhere, that is categorically not the case. Troian Bellisario sounded off on the topic in an interview with AfterEllen and pointed out, "We’re one year out of college, we have no idea who we are." She added, "It’s a lot more complicated because you get to present this polished exterior, but inside I think is a whole new set of insecurities and fears and questions that I get to deal with as Spencer."

Are you as excited as Bellisario is to see the girls weather their early twenties, potentially whilst being stalked by a violent and sadistic psychopath? I sure as heck am, and for more time jump theories, check out Bustle's Pretty Little Liars podcast below.