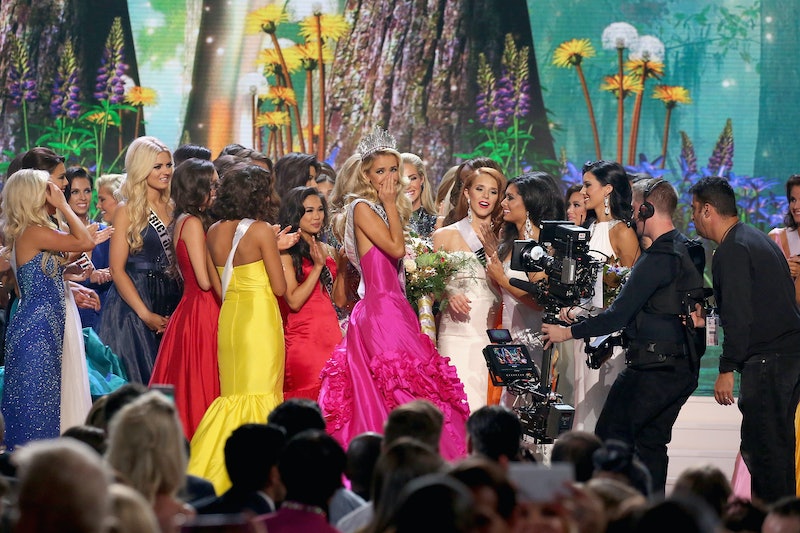 Every beauty pageant is an emotional roller coaster for the contestants, especially when the stakes are high, and few titles are more competitive than Miss USA. The winner of the Miss USA pageant gets a lot of things, including an apartment in New York City for a year, and the chance to represent her country in the upcoming Miss Universe pageant. But beauty pageants can be just as emotionally taxing for the people watching at home. Well, maybe not exactly as stressful as it is being on stage, but when you're watching the Miss USA pageant, you definitely feel a lot of feels.

Even if you're not someone who regularly watches these sorts of things, like me, it's easy to get swept up in the glitz and glamour of a pageant that's as elaborate as Miss USA. There's friendly competition between the representatives from the different states, and the evening is filled with drama, suspense, and beautiful dresses to stare at and imagine yourself wearing. (Or maybe that's just me? What can I say? I'm a sucker for a great floor-length gown.) When you're watching a pageant, you can imagine yourself walking alongside these accomplished ladies, taking that journey with them because you know winning the crown means the world to each of them.

So whether you're a hardcore Miss USA fan who waits for the pageant every year, or just a casual, curious spectator, here are the nine emotional stages you go through when watching the Miss USA pageant. I highly recommend watching with a box of tissues and a lot of snacks by your side.

The music starts and the contestants start introducing themselves, walking across the stage in their sparkly red, white, and blue dresses with white sashes, and there's so much spectacle and the crowd is so jazzed that you get excited for the show. You immediately pick a favorite contestant and start rooting for her, like you're Mama June and she's Honey Boo-Boo.

After an elaborate musical number, which this year involved white fans and umbrellas (which raises a ton of other questions about the Miss USA pageant, to be honest), all 51 of the contestants are brought back on stage. And then the host announces that you can vote for the contestants from home? That sounds fishy. And then a full 70 percent of the contestants are just kicked off, right off the bat, because apparently the whole competition has been going on for the last four days, and we're apparently already down to the semi-finals or finals or something.

As you close in on the first hour of the Miss USA pageant, many questions start to pop up about the welfare of the contestants, especially as the swimwear competition starts, and some of the 15 contestants sheepishly admit to one of the co-hosts that their feet are starting to hurt.

But what happened to all the other contestants who have been knocked out? I've heard those bikinis are stuck in place with some glue, which can't be comfortable. And is the auditorium warm enough for them to be walking around in only swimsuits? I hope there's someone waiting backstage with a warm terry cloth robe. And then there's the questions of my own comfort. How much longer will I be sitting here in front of the TV, watching video montages and infomercials?

Another five contestants bite the dust, but then the final 11 come out in those amazing, sparkling evening gowns, and you can't not be in awe. This is the moment they've worked so hard to reach, all while rocking stunning evening gowns and extra-high heels. You feel a little bad when you see Miss Nevada USA trip on her train, but are still impressed that she picked herself up and kept on walking without skipping a beat. That is grace under pressure, for sure.

There go another five women out the door, and you feel sad for a moment, but then the hosts remind you that the interview segment is coming up, and your sadness turns to fear. This is the make-or-break moment of the pageant, and a terrible, long-winded response will be the one that everyone remembers and that the Internet will dissect and make fun of tomorrow. You cross your fingers and hope it goes well.

One by one, the contestants are called up to pick cards and answer questions, and you cringe when you hear them asked about hot-button issues. And then Miss Rhode Island USA stammers throughout her answer to the question, and the bell rings before she has a chance to finish her point, and you just want to curl up into a ball and yell into a pillow until the embarrassment you feel for that woman dissipates. It's the worst.

After the interview segment is over, you feel some relief and can see the light at the end of the long, glittery tunnel. All of the contestants are on stage, including the ones that have already been eliminated, and you have so much respect for them. They're pros who have been wearing high heels for several hours and yet still have managed to string together coherent sentences for the interviews, and even the women who know they're not going to get the title stand through it all with a smile on their face.

All three categories are finished, and the only thing left to do is announce the winner. So why is it taking so long? Why are there still so many video montages? You start playing Angry Birds on your phone as the announcers keep on talking everything and debating and bantering and building the suspense. But you're entering the third hour of this spectacle, you're getting pretty sick of waiting, and you just want to go to bed and not be exhausted for work tomorrow.

When the winner's name is announced, and Nia Sanchez hands off her crown to Miss Oklahoma USA Olivia Jordan, you see her start to beam with joy; it's hard not to cry along with her, even if she wasn't your top choice. Say what you will about beauty pageants, but these women work hard to compete on this stage, and it's such a delight to see the payoff at the end. (It's also a delight to be able to go to bed, because you're exhausted after all these pageant shenanigans, too.)

More like this
23 Times Meghan Markle Dressed Just Like Princess Diana
By Bustle UK
The Nike & Jacquemus Collab May Have Been Inspired By Princess Diana
By Frances Stewart
42 Black Owned Fashion & Beauty Brands To Support Today & Always
By Mekita Rivas, Shea Simmons, Kui Mwai and Dominique Norman
7 Expert Tips For First-Time Pickleball Players
By Carolyn Steber
Get Even More From Bustle — Sign Up For The Newsletter