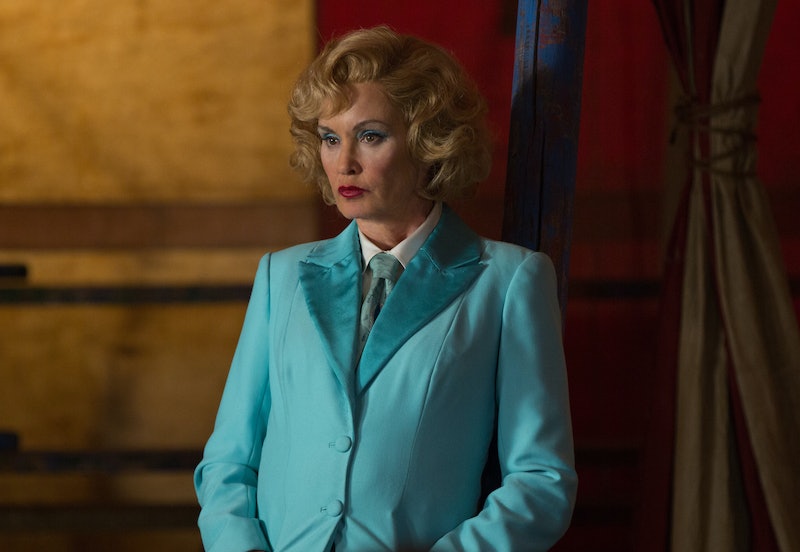 I'm not sure if this is what Ryan Murphy intended, but these yearlong waits between seasons of American Horror Story have been taking a serious toll on my emotional wellbeing. It's getting kind of difficult to subsist solely on tidbits of information about American Horror Story: Hotel, and, honestly, if I have to go on for one more day knowing that Jessica Lange won't be involved without actually seeing if it's going to work, I may have to find someone to speak to. Maybe Naomi Grossman. She seems pretty chill based on the number of times she's retweeted some of my tweets. Or, actually, you know what would really help? If American Horror Story: Freak Show went up on Netflix. When is that happening, anyway? [UPDATE: According to a Netflix press release it will be available Oct. 6.]

According to Reddit and Netlfix's announcement board, as well as the fact that it took over a year for American Horror Story: Coven to make its way on to the streaming service: Not for a long time. One Redditor pointed out that most shows and movies don't go up on Netflix until one month after their DVD release, and, according to the official Amazon page for the Season 4 box set, that won't be until October. Simple math suggests, then, the Freak Show won't be on Netflix until some time in November 2015, which is already a whole month after Hotel airs, which will probably mean AHS sensory overload, but I can't even pretend to be mad about it.

Anyway, I hate to be the bearer of bad news, but that means that you're just going to have to be stuck with Seasons 1-3 on Netflix until the leaves start to change. But, hey, it's not all bad — there are still plenty of shows on Netflix to tide you over until that day comes! Just think of this posting as the "Based On Your Interest In American Horror Story" section, but probably more accurate because I'm not going to go and try to make you watch Lilo & Stitch like Netflix always seems to try to get me to do. Here are 10 shows that'll tide you over until Freak Show makes its grand entrance:

Since you liked Freak Show, I'm going to assume that, to some degree, you're into some massively effed up s***. Well then, you're going to LOVE The Following. It follows Kevin Bacon playing the part of an FBI agent tracking down a notorious, Edgar Allen Poe-loving serial killer. It's good stuff, guys.

Nine of the 10 seasons are already on Netflix. This is the kind of show you think you'll just watch for chuckles and then end up falling in love with. Trust me on this.

For everyone who loved that one episode of Freak Show featuring Matt Bomer and are desperate for more. Bonus: Whenever he's not wearing a perfectly tailored suit, he's usually shirtless.

It's a lot creepier than I was expecting it to be, and Vera Farmiga ( AHS semi-regular Taissa Farmiga's older sister, BTW!) gives off some major Jessica Lange vibes throughout. Honestly, it's worth watching if only to appreciate Freddie Highmore's attempts at an American accent.

I've never seen it, mostly because the trailer makes it look kinda scary, and I don't know if I'm up for that. But it's a Netflix original series, and those are generally pretty good. Plus, the creep factor should be right up most AHS fans' alley.

Yet another Netflix original series that deserves your attention.

I've included Sherlock on this list only for the people for whom the yearlong wait between AHS seasons is so excruciating that they can't actually think about anything else. I promise you, Sherlock's few (yet extremely jam-packed) episodes will make you forget about everything else. But, it will also give you another show for which to wait over a year for new seasons, so, you know, watch at your own risk.

I've tried to watch this so many times and can't, not because it's bad, but because there's so much blood. In case you know nothing about the show, Michael C. Hall plays a serial killer who kills serial killers. It's super interesting, but super gory. So, if you enjoyed looking at Twisty the Clown's mask-less face on Freak Show, you'll probably enjoy Dexter.

Again, this is another show I know very little about, but I approve of anything starring Idris Elba.

More like this
What’s New On Netflix: 'Never Have I Ever' & 'Indian Matchmaking' Return
By Arya Roshanian
What’s New On Netflix: 'Bridget Jones’s Diary' & 'Monster-in-Law'
By Arya Roshanian
Here’s Everything Coming To & Leaving Netflix In August
By Jake Viswanath
This 'Sex Education' S4 Update Is Everything You Were Hoping For
By Bustle UK
Get Even More From Bustle — Sign Up For The Newsletter