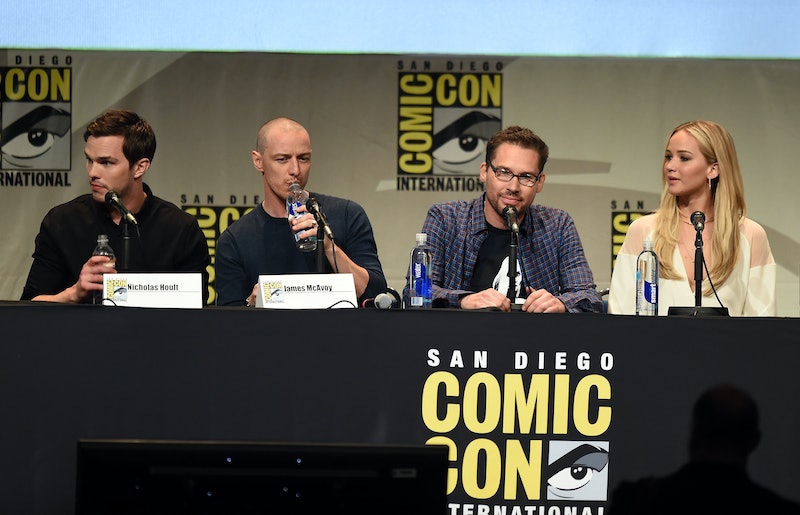 When most people go to Comic-Con, they have certain hopes and expectations: to see the cast of of an upcoming movie together, or hear the showrunners of their favorite show speak, or, if they're really lucky, get to meet one of their heroes. They most certainly don't expect to be witness to a history-making event, but at the 2015 convention, hundreds of fans got to do just that, when the stars of X-Men Apocalypse , Fantastic Four , Gambit and Deadpool took a selfie at the panel for 20th Century Fox on Saturday, July 11. Stars ranging from Jennifer Lawrence to Channing Tatum made it into the photo, which might go down in history as one of the best — if at least most superhero-studded — photos in celebrity history.

Just try to grasp how many incredible stars were involved in this one photo, taken by panel host Chris Hardwick. There was Lawrence, plus her X-Men costars Hugh Jackman, Michael Fassbender, Oscar Isaac, Olivia Munn, Nicholas Hoult, Sophie Turner, and James McAvoy; Gambit's Channing Tatum; Deadpool's Ryan Reynolds; Fantastic Four's Michael B. Jordan and Jamie Bell; and, of course, the Father of them all, Stan Lee. And those are just the people I can identify; the photo may be history-making, but it certainly isn't the clearest.

Yet blurry or not, there's no doubt about it: this superhero selfie is very, very cool. It's already gaining serious amounts of attention, with 40,000+ likes on Instagram and likely many more shares and reblogs. Check out the incredible photo below:

Kim Kardashian, watch out: this is the selfie that's gonna break the Internet. It won't be the first time for some of its subjects, however — here are a few other photos from the selfie's ensemble that caused freak-outs across the globe:

The best group selfie there was — back then.

It seems that the ultimate Internet-breaking combination is Channing Tatum and a puppy.

Because nothing makes people's minds spin more than Game of Thrones' actors out of costume, having fun.

Yes, every photo of Michael Fassbender there is breaks the Internet, and it's all his fault.

What started out as a sweet Father's Day photo ended up causing a firestorm online, thanks to the incorrect usage of a baby carrier. Still a cute picture, though.

These three in the same photo? The only thing that'd make it more amazing is if Michael Fassbender was hiding in the background.

What. A. Photo. May the superhero selfie of 2015 live on in our memories for years to come.