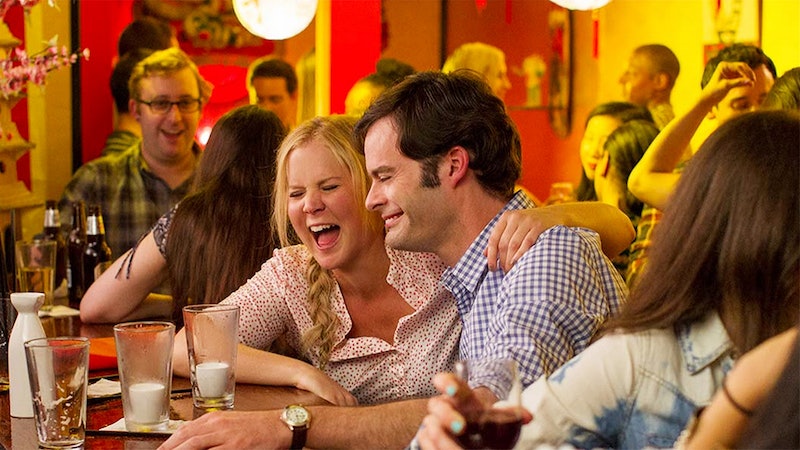 When you buy a ticket for a Judd Apatow movie, you usually have a pretty good idea of what to expect: hilarious actors, plenty of gross-out scenes, and pop culture references galore. All of these are present and accounted for in Trainwreck , the Amy Schumer-starring new movie from the director, especially the references; during the course of the film, there are shout-outs to everyone from A-Rod to Billy Joel, each one funnier than the last. Some people and projects are mentioned without too much fuss, but others? They might want to stay far, far away from the theater come July 17. No one is off the hook when it comes to pop culture references in Trainwreck .

And the movie's fearlessness in dissecting pop culture is one of the many reasons it's one of the best comedies out this year. Trainwreck is an absolute must-see, thanks to a career-making performance by star Amy Schumer, a pitch-perfect script, and great supporting turns by Bill Hader, Brie Larson, and even LeBron James. But it's the multitude of references to movies, TV, music and more that really give the film its "something special." Below, 18 of the very best ones (spoilers to follow):

One of the most prominent references in the movie, Aaron (Hader) listens to "Uptown Girl" during surgery, much to Amy's (Schumer) dismay. Later, though, she plays the song during her attempt to win him back.

One of Kim's (Larson) friends is so bad as to let her child watch an episode of Glee. Scandalous!

Aaron impresses a group of men with his celebrity patients, including athletes like Tom Brady and Tony Romo. All of them elicit awe — except for A-Rod, who gets a vehement "fuck that guy!" from the crowd.

Aaron and Lebron James have standing plans to watch Downton Abbey after work, because of course they do.

Amy and Stephen (John Cena) go to the movies, where they see a heartbreaking film about a dog walker, played by Daniel Radcliffe, and his romantic interest, played by Marisa Tomei. Not much else can be gleaned from the plot, but it looks like an Oscar winner to me.

When discussing a guy that Amy's recently dated, Nikki (Vanessa Bayer) calls him the "white Drake," while Amy says that he's more like a "Puerto Rican Gollum."

In voice-over, Amy refers to the famous bench from the filmmaker's Manhattan as where "Woody Allen met Soon-Yi." Oof.

Allistar, Amy's creepy nephew, is obsessed with Minecraft, drawing out diagrams of the game in notebooks to plan his next move.

It takes Aaron a bit to realize that the relationship advice Lebron is giving him is really just the lyrics of "Gold Digger."

Amy makes a joke about not looking as excited as "Anne Hathaway at an Oscar party." Ouch.

In some unfortunate photos, Aaron is said to slightly resemble Dexter, the TV serial killer. I mean, I don't not see it.

In Amy's father's assisted living, the residents get in a heated debate over Babe Ruth's baseball skills. It's not pretty.

Amy compares a used tampon to the infamous Red Wedding episode of the HBO series, which many women can understand. She also compares it to Django Unchained. Bloody right.

The basketball team plays a large role in the movie, with several of its players making cameos and a game being shown. At the end of the movie, it's at a Knicks game that Amy and Aaron get back together.

The actor, the tennis player, and the sportscaster, respectively, team up to give Aaron an intervention. It doesn't work.

Early in the film, Amy and Nikki have heartfelt conversation over which version of Johnny Depp is sexier. Nikki prefers the Pirates of the Caribbean look, while Amy says that she would go for either Edward Scissorhands (despite the danger) or Willy Wonka. To each her own.

Need to sound like a pro but know nothing about sports? Just refer to the "Long Island Mediums" or the "Orlando Blooms," and no one will know the difference.

How good are these? Thanks, Trainwreck, for providing pop culture fans with these amazing, spot-on references.