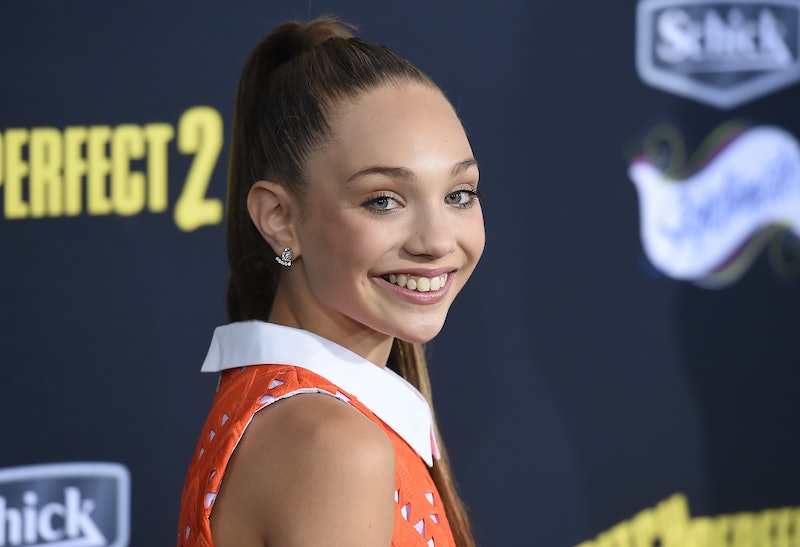 Dancer and actress Maddie Ziegler is only 12 years old and already she's accomplished more than most people. Maddie is the the breakout star of Dance Moms on Lifetime, and she's also played very memorable roles in two Sia music videos for the songs "Elastic Heart" and "Chandelier." But, life isn't all glamour and music videos for the tiny dancer — Maddie Ziegler's Instagram account reveals so much about her off-show life, like photos of what she's eating and her hangouts with friends. And, yeah, there's some glamour, too, because her life is pretty amazing. Funnily enough, her account is actually run by her mom, Melissa, because, hey, Maddie isn't even a teen yet!

Not only is Ziegler an accomplished dancer, but she's danced with some of the biggest Hollywood stars, like Shia LaBeouf, Lena Dunham, and Kristen Wiig. The young dancer, though, still leads a semi-normal life, getting home-schooled with a tutor in the mornings, doing her own makeup, and watching Pretty Little Liars. "I'm always with my friends, we go to dinner or we eat in our apartments together," Ziegler told Harper's Bazaar earlier this year. "I watch TV or hangout and watch Youtube videos. I'm always watching TV—my favorite show is Pretty Little Liars. I also like the Disney Channel too."

Here are more tidbits about her off-show life, according to her Instagram.

1. She Appreciates Her Teachers

It's so great to see her recognizing and appreciating the folks who helped her get where she is.

2. She Loves To Talk About Pretty Little Liars

Ziegler loves the ABC Family show so much that she even appeared in one of the episodes. (Does she know who A is?)

3. She Loves A Good Salad

Because who doesn't? And, that salad looks good.

Hers are definitely on fleek here.

5. She Goes To Birthday Parties With Friends

Because why not? It's fun!

7. She Hung Out With Taylor Swift

You know, Ziegler just casually chilled with Tay-Tay backstage at one of her 1989 Tour stops. And, it's not even the first time they've met. So jealous.

8. She Enjoys A Good Beach Day

What a great way to kick off summer.

9. She's Not Afraid To Get A Little Weird

Check out that epic icing.

And sister Mackenzie was surely there to pass some tissues (or vice versa).

Maddie Ziegler is a lot like us regular folks in some ways — and in others, she has a glamours life I'm super jealous of. But, at least her Instagram followers get to be apart of it!

More like this
Everything To Know About The 'Pretty Little Liars' Reboot On HBO Max
By Mary Kate McGrath and Jack Irvin
'The Summer I Turned Pretty' Using “Cruel Summer” Has Twitter Begging Taylor Swift To Release A Music Video
By Radhika Menon
Here’s How Lizzo Is Supporting Abortion Rights After The Roe v. Wade Reversal
By Brad Witter
Taylor Swift's “Carolina” Theme For 'Where The Crawdads Sing' Soundtrack Is Here
By Jake Viswanath
Get Even More From Bustle — Sign Up For The Newsletter