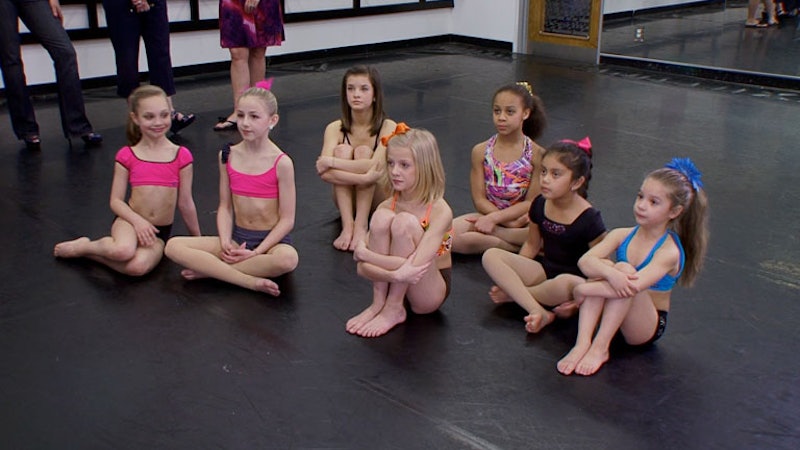 It's been four years since Lifetime first debuted Dance Moms. It was just a simple show about young dancers and all the drama their mothers can cause when faced with high stakes competition and a slightly crazy dance teacher. Abby Lee Miller is famous for her unconventional teaching methods, but there's no denying she raises stars. Nothing shows that better than rewatching the Dance Moms pilot, because with perspective from the rest of the seasons you realize you can miss a lot when you first watch Dance Moms season 1.

Back then Maddie Ziegler was just an eager dance student, and now she's the star of two Sia music videos. But the show didn't just introduce the world to Maddie. Although she's a household name now, her teammates were just as talented—even four years ago. Chloe Lukasiak, Brooke and Paige Hyland, Nia Frazier, and Maddie's younger sister Mackenzie Ziegler popped up on our television screens in 2011, and changed everything you thought you knew about how intense dance is.

Elite dance is nothing to be trifled with and nothing showcases that better than the drama-filled Lifetime show. So let's take a look back at all the things viewers missed in the pilot now that it's been four years.

All The Original Cast Was There

Aw remember Paige and Brooke Hyland? They eventually left in Season 4 after their mother got into such a bad fight with Abby Lee Miller that she filed a lawsuit. Also still there in the beginning was Chloe Lukasiak who left the show recently. All the girls are still dancing independently of the show, but it was kind of sad to rewatch and remember how tight-knit they all used to be.

And There Was No Kendall

Kendall and her mother Jill Vertes are staples on the show now, but they didn't actually show up until Season 2. They were one of the few latecomers that managed to integrate themselves into the core group which is how I completely forgot that Kendall didn't start with them.

Everyone Was So Young!

Maddie Ziegler started the show four years ago at just 8 years old, and her little sister was only six. But even as young as they were, they were all still crazy talented.

When Abby first pitched the idea of a new dance for each week's competition, the moms and kids freaked out. Usually teams practice for six months before performing. But these days the dance-a-week is old news and the kids balance new solos, group dances, and trios with incredible ease. I'll say this for Abby, she is training hard working dancers who can pick up new choreography in a heartbeat.

Abby Had the Best One-Liners

"Those legs are about as straight as Elton John," she yelled to the girls during a practice. She was born to be a reality star.

It Cost a Lot to Be Taught By Abby

Chloe's mom revealed that she spent $16,000 on dance lessons per year in Season 1. I imagine that rate has only gone up since Abby became famous.

Maddie Was a Star From the Start

Even at the young age of eight, it was clear Maddie was destined for greatness.

Kelly Danced With Abby When She Was Young

Brooke and Paige's mom had a history with the controversial dance teacher. The two of them grew up together because Kelly was dancing for Abby's mom when she was just three years old. All that history often lead to intense arguments between Kelly and Abby because they'd simply been around each other for so long.

As the seasons wore on, Brooke Hyland often talked about how she was over dance. She was a teenager who was more interested in hanging out with her friends than being in the dance studio for a million hours per week. But her disinterest actually started all the way back in the pilot. When her mom asked if it bothered her that she didn't get first and second place anymore, Brooke calmly replied, "Not really."

Back in the first season, Nia's mom wasn't just a dance mom. She also ran a school and was earning her doctorate on the side to show her daughter that she could do anything when she grew up. Mega cool.

Cathy Wasn't the Villain Yet

Cathy's daughter didn't care one iota about all the dance fuss. She was like the anti-Maddie and totally relatable.

Abby Called the Police and The Officers So Didn't Care

When an enraged mother started berating Abby for kicking her daughter out of class, Abby called for police backup. They showed up because that's their job, but you could tell they didn't really get what the big deal was. "Take your daughter somewhere else then if you don't like the company," the confused officer told the offending mother.

They Didn't Do So Hot at Their First Performance

For their first show dance performance the girls scored third place. And while that's not bad, to Abby anything other than first is blasphemy. Fortunately over time the girls (and Maddie in particular) got a lot better and now they're some of the most recognizable young dancers out there. They've come such a long way since Season 1.