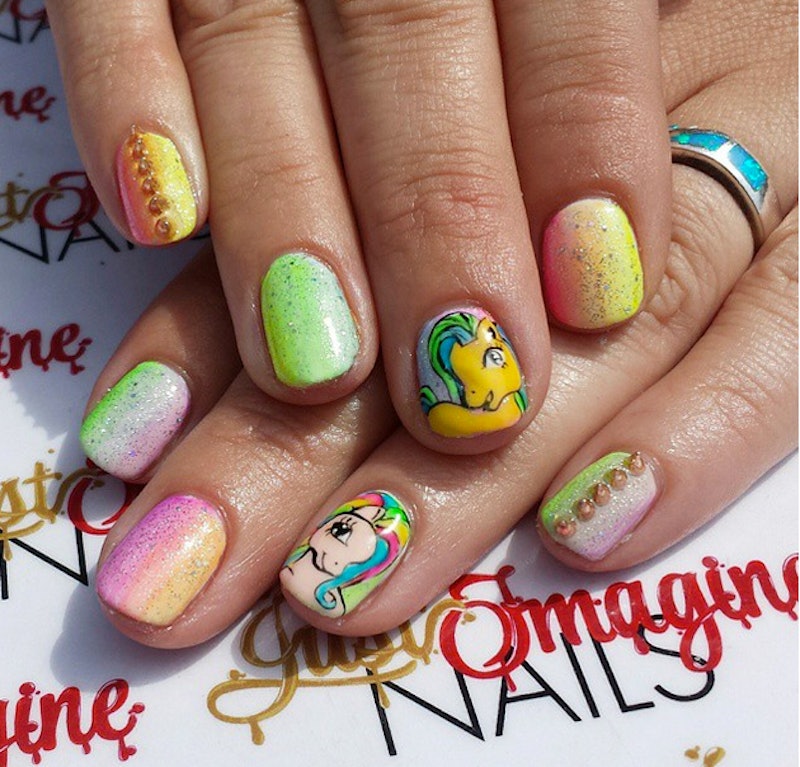 Nail art has changed since the '90s; instead of being all about super glam talons, people are looking to popular culture for new and exciting nail art ideas. For fans of My Little Pony, you'll be pleased to hear there is a plethora of My Little Pony inspired nails out there, so I just had to share some of these cute designs with you. When I was a child, I was a huge MLP fan, to the point where I would be almost on the brink of tears when my dad would tease me and tell me they weren't real, accompanied by him changing the words to the theme tune of the original cartoon from, "My Little Pony, My Little Pony," to, "My Little Pony, plastic and phoney."

As a '90s kid, I much prefer the style of the old school pony toys and the illustrations of the original series, as it appears the modern ponies of the new series have undergone a Bratz style makeover. Instead of being cute and plump, the new ponies are much more slim and IMO don't appear to be as "realistic" looking as the originals.

I am aware I have just used the term "realistic" when describing magical horse toys (and a cartoon series based on these toys), but hopefully you catch my drift — the original series of toys looked like they were inspired by real horses whereas the new series looks super cartoony. Perhaps this is due to society's perceptions of beauty and the modern day, media-driven obsession with being "slim," as it appears the ponies have trimmed down in response.

However, it is hard to deny the cuteness of both the original and the modern series of MLP and many people appear to love both the old and the new. So to honor these rainbow colored ponies, here's some nail art inspiration from Instagram so you can channel your favorite My Little Pony .

This buttercup yellow nail art is a great style for summer. This particular design is inspired by the super cute Fluttershy from the more recent series and includes nails inspired by her markings, her face, and her sparkly mane. Apply this to any of the characters to channel your favorite pony.

Take inspiration from your favorite pony in a subtle way by taking style hints from their color scheme and individual markings. This manicure includes a gradient nail, sparkly nails, and a pink stick on jewel. Kudos to the creator who has photographed her new nails with her style muse.

This could possibly be my favorite design of the bunch, featuring old school MLP artwork and a sweet pastel pink and green color scheme. This manicure has a modern twist with the addition of stiletto shaping.

This multicolored mani features the profiles of some of the main protagonists of the new MLP series. A great way to show off your love of nail art and your favorite characters.

This is a lovely manicure featuring pastel colored nails, stars, sparkles, and bows — it's a perfect design for all of the girly girls out there.

This bright design is a modern take on '90s style. It features retro ponies, neon ombré, and spikes to give it a modern edge. I imagine this to be worn by Britney Spears in her video for "Pretty Girls," or by Dionne from Clueless as an ironic beauty look, since the original TV show actually aired in the '80s.

Oh my goodness! Take a look at these space-y, sparkling My Little Pony nails featuring new pony Rarity. I love how the glittering stars look like they are shining in a midnight sky and the background blue hue seemingly takes inspiration from Rarity's mane. Too cute for words.

Have a magically nostalgic summer in My Little Pony Inspired nails.