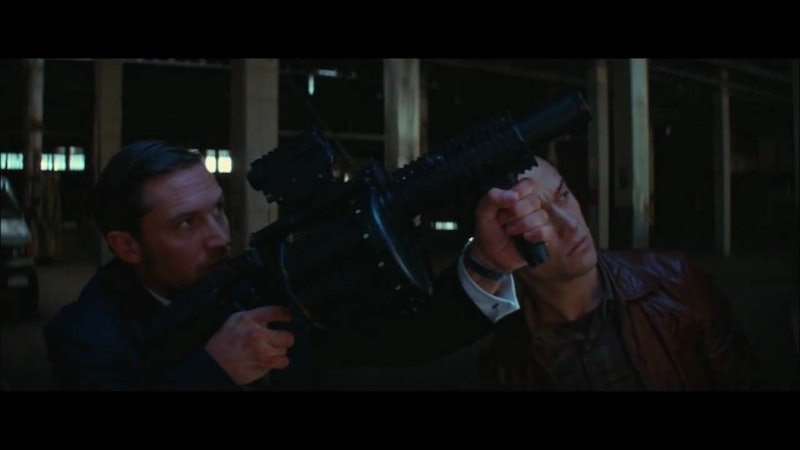 It's an injustice, really. That mega-babe Tom Hardy's awesome, crowd-pleasing line from the 2005 action/sci-fi classic Inception (which celebrates the fifth anniversary of its theatrical release on July 16) isn't quite as iconic as other famous movie quotes, but dammit, darling, it should be. After all, it's memorable, it's sharp, and everyone definitely recited it as soon as they left the theater. I mean, doesn't it look great in this company here?

"Houston, we have a problem."

"I'm gonna make him an offer he can't refuse."

"You mustn't be afraid to dream a little bigger, darling."

See what I mean?!

And, yes, we all remember that infuriating spinning top (did it fall or stay up?!?) and the eye-popping avalanche sequence and the dramatic "BWAAAAAAAAAAAAAAP" sound effect in the sweeping, Oscar-nominated score, but, really, it's all about Hardy's hilarious, sexy quote.

In the particular scene in question, dream thief Eames (Hardy) one-ups fellow inceptor Arthur (Joseph Gordon-Levitt) during a shoot-out when he pulls out a much more impressive gun and finally hits the target he'd been aiming for. Hardy delivers the line with such effortless coolness, it's impossible not to smile (and, okay, feel a little tingly) when he says it. For a movie that's jam-packed with harrowing drama and mind-bending twists, this suave, oh-so-funny line not only breaks up the film's relentless tension, it pretty much solidified the actor as an action hero and a heartthrob with American audiences.

Let's watch it, shall we?

Ahhh, so good! And honestly, this should be more quoted by movie geeks, considering how many situations the Nolan-penned zinger could be used in. In fact, here's three perfect examples of where you could recite Hardy's brilliant line:

During a Commencement Speech

Now, go out there, darlings, and make this line live on forever and ever and ever... just like that damn top.