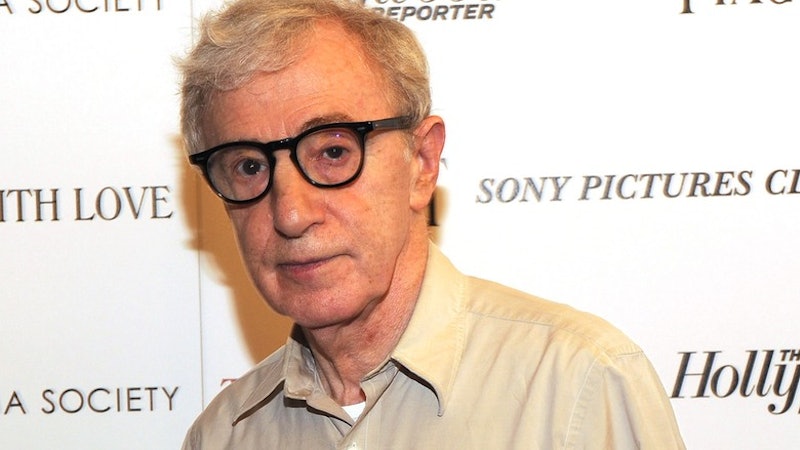 Sometimes spending $13 on a movie ticket feels like too much. After all, that's practically the price of two entire months of Netflix. Still, certain films are worth the splurge, and Amy Schumer's Trainwreck absolutely falls in that category. The Judd Apatow-directed comedy is filled with plenty of hilarious jokes, including one at Woody Allen's expense. In a montage that Schumer's character narrates, she points out the bench from Allen's movie Manhattan and refers to it as where “Woody Allen met Soon-Yi.” (Yup, a dig at the fact that Allen married one of his adopted daughters.) When I saw the movie, the audience erupted in laughter at that line. So, how does the filmmaker feel about this diss? In an interview with Vulture, Woody Allen admits Amy Schumer is talented and although he hasn't seen Trainwreck, he's familiar with Schumer's other work.

In fact, he had nothing but praise for the rising star, saying,

Being a comedian myself, I have a tremendous admiration and respect for all these people. I used to think that, Oh, I was so great, and there's so many comedians, and they're second-rate. And then I watched them on cable television, and I thought, My god, I'm nowhere near as good as any of these people! I have a tremendous respect for all of them; it's amazing how good they are, and how much better than I was all of them are, including her.

So there you have it — Woody Allen says Amy Schumer is a good comedian and possibly even better than himself. That's quite a compliment, and it's definitely interesting to see Allen — one of the biggest and perhaps most controversial comedians around — voice support for Schumer, who's essentially the face of feminist comedy today. It's respectable that Allen can laugh at himself when he's the punchline of a (admittedly well-deserved) joke. Look, I'm not saying Allen is a great guy. If the allegations are true about him sexually assaulting his adopted daughter Dylan Farrow, then he's far from it. But setting that controversy aside for the moment, Allen is still a filmmaking legend, and it's nice to hear he respects Schumer. Because, guess what? Apparently, the feeling is mutual.

In a video interview with Collider, Schumer said she admires Allen's work. When asked about that Allen reference in Trainwreck and filming the movie in New York, she says,

I grew up loving Woody Allen. Deconstructing Harry is one of my favorite comedies ever. Yeah, I mean it seems almost impossible to avoid paying your respects.

Skip ahead to the 8:15 mark in the video below for the comments:

Of course given Schumer's strong stance on standing up for women (Remember her courtroom sketch about the whole Bill Cosby sexual abuse scandal?), it's likely she wouldn't agree with Allen's personal views, if the allegations of abuse are true. Yet it can't be denied that a compliment from the director would likely mean a lot to anyone, especially someone on the rise like Schumer. At the end of the day, it's great to see the Trainwreck star's talent getting the recognition it deserves — regardless of how unexpected the source.